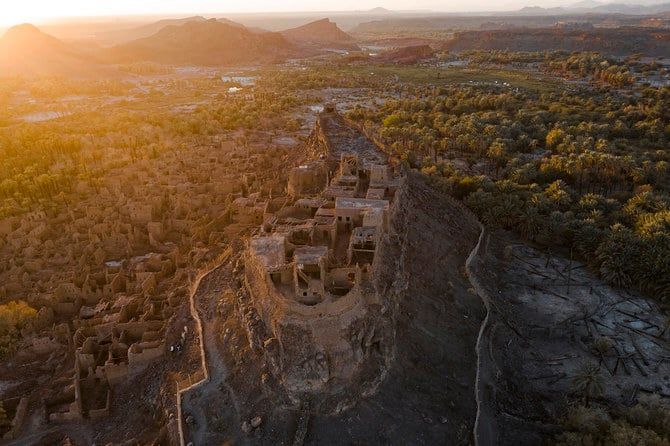 For centuries, the importance of the ancient cities of Tayma, near the modern-day city of Tabuk in northwestern Saudi Arabia, and Khaybar, an oasis north of Madinah, had been largely forgotten.

Now, the Royal Commission of AlUla, or RCU, is bringing these precious sites back to life as part of the inaugural Ancient Kingdoms Festival, reconnecting the ancient oases of AlUla, Tayma and Khaybar to celebrate their distinctive heritage and culture.

“This year, we have created an extraordinary moment by reconnecting the triad of AlUla, Khaybar and Tayma in a considered approach founded on years of research,” Eman Alankari, executive director of cultural sites management at the RCU, told Arab News.

“For the first time in modern memory, the cousin sites can be accessed and understood in parallel, in a continuous historical narrative.”

Tayma is mentioned in Assyrian texts dating to the fourth century B.C. and is referred to numerous times in the Hebrew Bible. During the first century A.D., Tayma is believed to have been a primarily Jewish settlement. 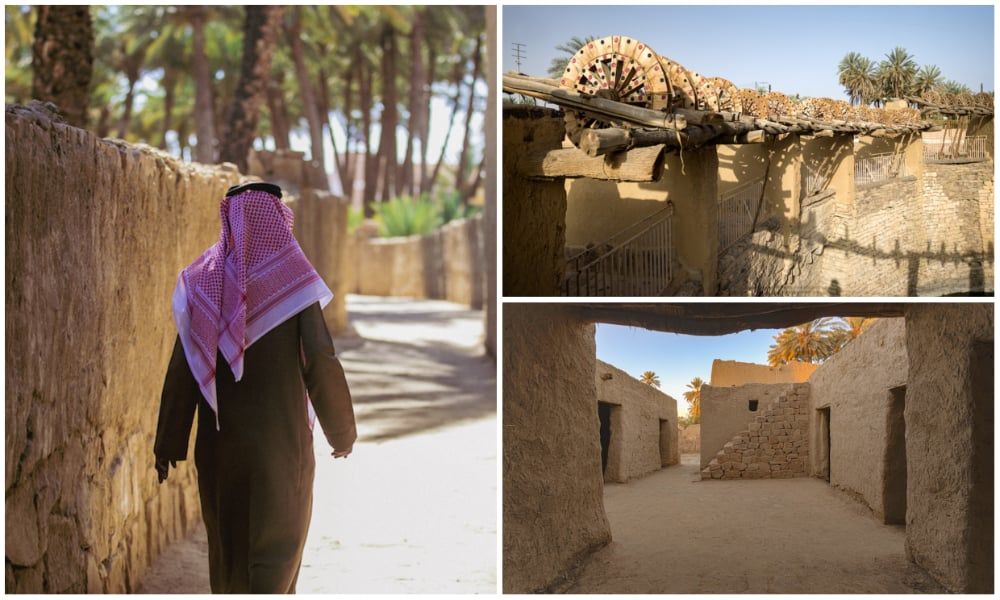 The region, including parts such as Tayma old town, shows evidence of human habitation stretching back 4,000 years.
However, its history goes back much further. Archaeological discoveries reveal that Tayma had been inhabited since the Bronze Age, around the fourth millennium C.E.

In 2010, the Saudi Commission for Tourism and National Heritage announced that a team of Saudi archaeologists had discovered the Kingdom’s first hieroglyphic inscriptions mentioning an Egyptian pharaoh, in this case Rameses III (1186-1155 B.C.).

The discovery showed that Tayma was once an important land route between the western coast of Arabia and Egypt’s Nile valley.

The first known modern recordings of Tayma date back to the 19th century when English traveler, poet, writer and explorer Charles Montagu Doughty visited and mapped the region in 1877.

Doughty had visited AlUla a year earlier, mentioning it in his 1888 book, “Travels in Arabia Deserta,” which constitutes the first comprehensive Western work on the geography of Arabia. 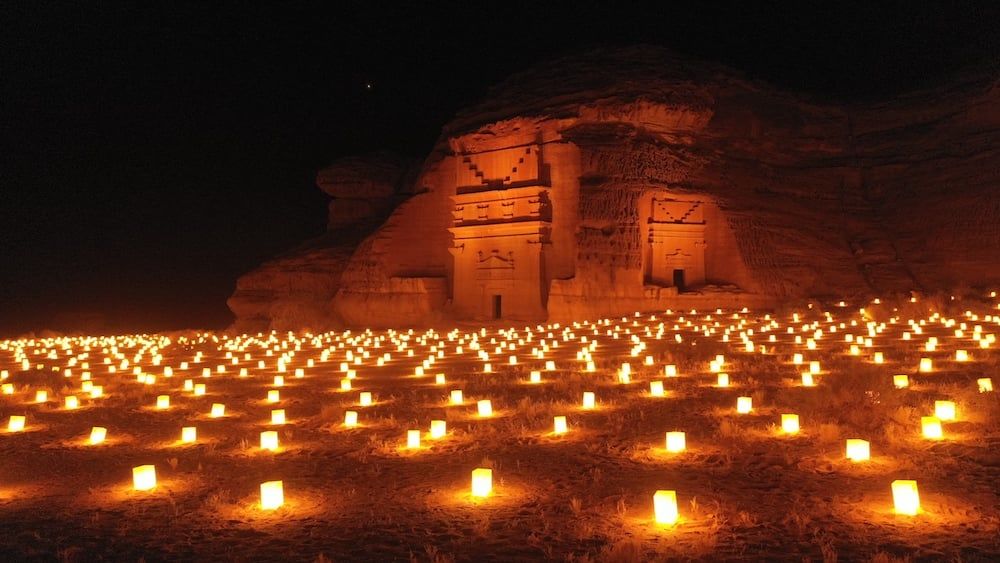 The ancient city of Hegra by night.

Between 1878 and 1882, French Orientalist and explorer Charles Huber also visited AlUla to explore the area’s ancient inscriptions. It was during this trip that he discovered the Tayma stones — a collection of tablets inscribed in Aramaic — which were brought to the Louvre in Paris in 1883 where they remain to this day.

The inscriptions describe how an Akkadian king invaded the city of Tayma, slaughtering and enslaving its people. The Akkadians (2350-2150 B.C.) built the first ancient empire of Mesopotamia after the civilization of Sumer.

The historical significance of Tayma stems from its strategic position on the ancient incense trail, a network of trade routes extending more than 2,000 km that carried frankincense and myrrh from Yemen and Oman in the Arabian Peninsula to the Mediterranean.

Tayma is also known as the “Land of Kings,” primarily owing to the enigmatic Babylonian King Nabonidus, who resided there during the mid-sixth century B.C. He had once ruled the Babylonian Empire, which included modern-day Iraq and Syria.

Nabonidus was the last king of the Neo-Babylonian Empire, ruling from 556 B.C. to the fall of Babylon to the Achaemenid Empire under the Persian King Cyrus the Great in 539 B.C.

A fascinating individual to study, some archaeologists view Nabonidus as a religious reformer and the first archaeologist.

Nabonidus conquered Tayma and lived there for a decade to worship and search for prophecies while entrusting the throne to his son, Belshazzar. It remains a mystery why he chose to stay. 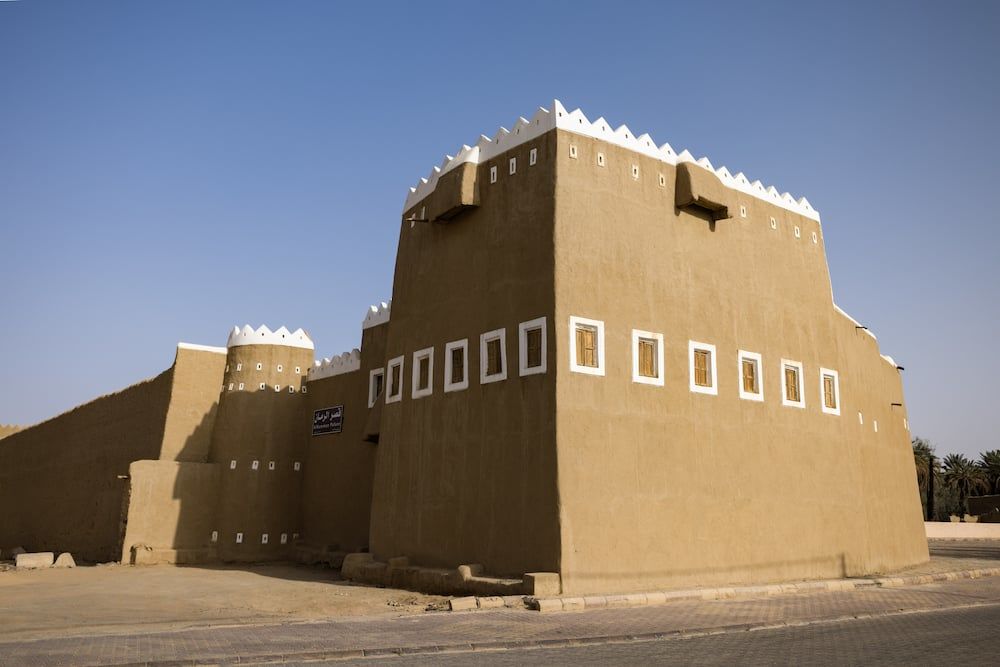 Royal Commission of AlUla is bringing precious sites back to life as part of the inaugural Ancient Kingdoms Festival, reconnecting the ancient oases of AlUla, Tayma and Khaybar.

Present-day guides to Tayma provide one theory as to why Nabonidus neglected his empire and moved to Tayma. Some say he may have disagreed with the primary religion in Babylon and moved to Tayma to worship a god of his choice, but no one can prove this hypothesis.

His exile is alluded to on a stele discovered by Saudi-German excavation teams in 2005. Following his defeat by Cyrus the Great, it is still unclear whether he was executed or forced into exile.

While we will never know why Nabonidus mysteriously abandoned the city of Babylon for a remote oasis in the western Arabian desert, part of his legacy sheds light on the significance of these, until recently, little-known desert kingdoms.

The ancient treasures of Tayma and Khaybar form the centerpiece of this year’s AlUla Moments and, in particular, the inaugural Ancient Kingdoms Festival, which brings to life the three interconnected oases of northwest Arabia.

The festival is staging a variety of cultural performances, workshops and sightseeing opportunities, recreating the history and traditions of these cities, which for thousands of years served as a crossroads for merchants and explorers.

Since opening to tourists, AlUla has been welcoming visitors to its ancient sites, notably the UNESCO World Heritage site of Hegra. 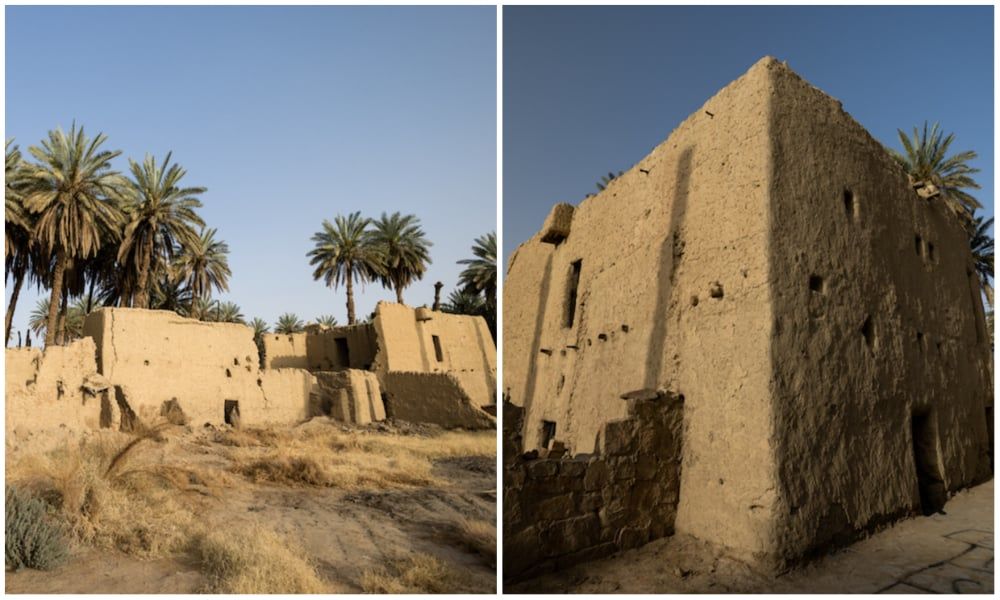 The fascinating stories emerging from these once bustling commercial hubs in ancient Arabia are shedding light on a world long lost to the sands of time.

“RCU works closely with an international team of archaeological and heritage management experts to discover, revive and protect heritage sites within our region of engagement,” Alankari told Arab News.

“Our vision is to create the world’s largest open air living museum and share the treasures that are being revealed by taking the world directly to the sites, to the scene where history happened, and discoveries continue to be made.”

Festival goers can visit the ancient Temple of Salm, overlooking a vast landscape where there was once an ancient lake, and the remains of structures dating back to the Iron Age.

They can also see Bir Haddaj, a well that is thought to be the largest of the ancient world, built during the reign of Nabonidus in the mid-sixth century C.E.

In the fifth century C.E., the well fell into disuse and remained buried for centuries until a local Jewish resident, Suleiman Al-Gonaim, uncovered its location and restored it. Fast-forward to 1953, and it was the turn of the modern Saudi state to add four pumps to help local farmers obtain sufficient water for their crops. 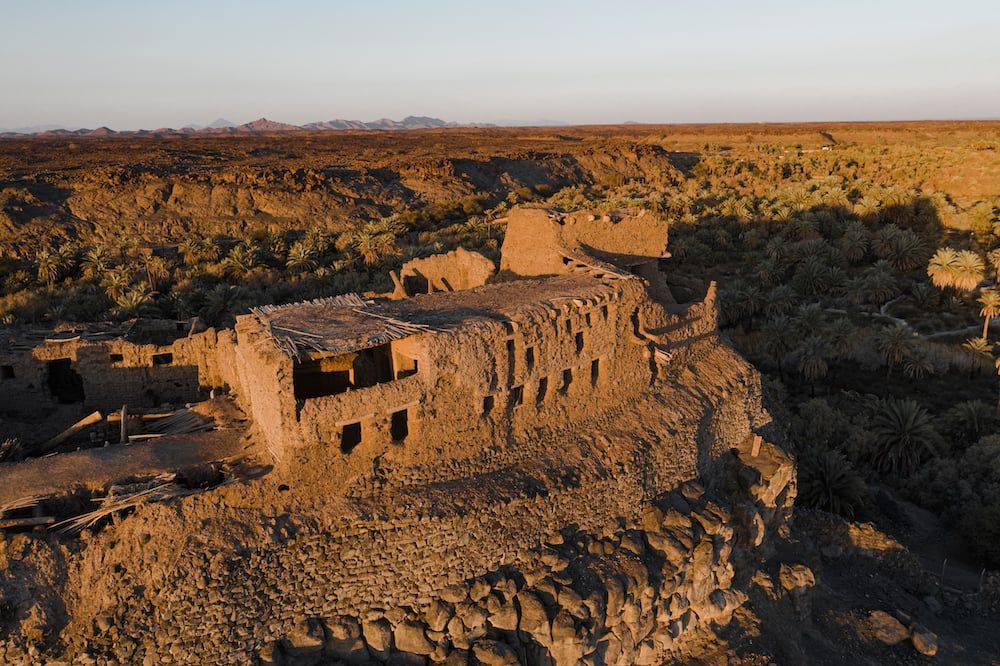 The vision of the festival organizers is to create the ‘world's largest open-air living museum.’

At Khaybar, opened to the public for the festival, visitors can explore mysterious prehistoric stone structures — best seen by helicopter excursion — and the Harrat Khaybar volcanic site, where they can enjoy adventure trails through the Umm Jirsan lava tubes.

AlUla highlights include trips to Hegra, the ancient kingdom of Dadan, once the capital of the Dadanite and Lihyanite kingdoms, where visitors can join an “apprentice archaeologist” program and interact with experts in the field.

A journey through Jabal Ikmah, a mountain near the ancient city of Dadan, reveals ancient inscriptions, winding rocky pathways and stunning nighttime vistas of the ancient Arabian desert landscape.

However, jewels in the festival crown are undoubtedly Tayma and Khaybar, where visitors can get a first glimpse of these ancient Arabian cities still undergoing renovation.

Tayma is open for a limited time until March 31, 2023, after which it will close for more excavation and restoration work.

The fascinating stories emerging from these once bustling commercial hubs in ancient Arabia are shedding light on a world long lost to the sands of time. 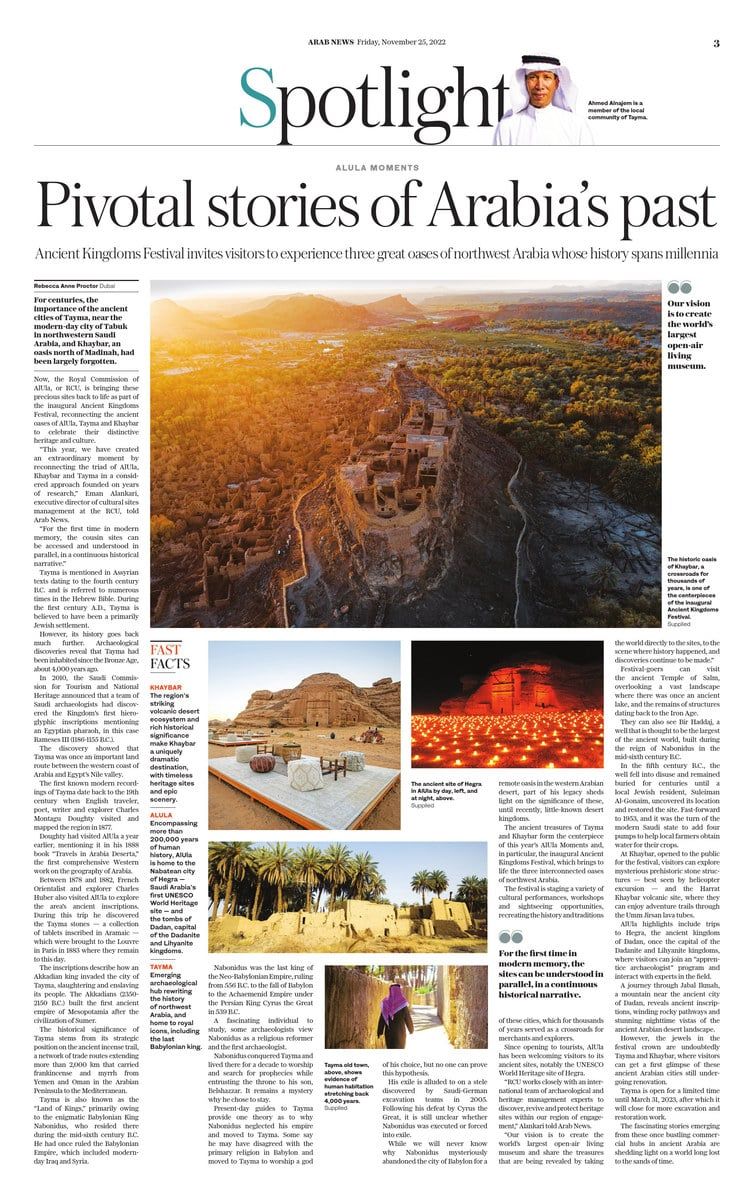