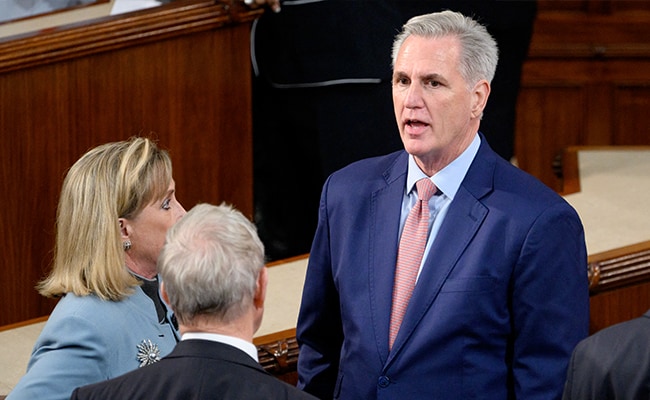 "We're Going To...": Kevin McCarthy Ahead Of Final US House Speaker Votes

The Republicans, who hold a razor-thin majority, were mired in internecine warfare after Kevin McCarthy lost a historic 11 consecutive ballots in the contest, with around 20 conservative hardliners blocking his path.
Republican frontrunner Kevin McCarthy took a significant step to becoming the new speaker of the US House of Representatives on Friday as he quelled a rebellion among his party's ranks that has paralyzed the lower chamber of Congress for four days.

The Republicans, who hold a razor-thin majority, were mired in internecine warfare after McCarthy lost a historic 11 consecutive ballots in the contest, with around 20 conservative hardliners blocking his path.

But the 57-year-old Californian was able to pick up 14 votes among the defectors in the 12th round on Friday after offering major concessions, in a development that McCarthyites hope will lead to more votes flipping.

It was the first time in the tense, drawn-out process that McCarthy has actually beaten his Democratic opposite number Hakeem Jeffries, although neither has achieved the outright majority required to win the speakership.

"Just reminds me of what my father always told me," McCarthy told reporters. "It's not how you start, it's how you finish. And now we have to finish for the American public."

There were even hopes that the Republican could get over the line in the 13th ballot, which came immediately after the 12th, although in the end the result was the same.

With the former storekeeper needing just three more votes for a majority in the 14th round -- and two of his absent allies expected to return to Washington within hours -- McCarthy secured an adjournment until 10:00pm (0300 GMT).

'We're going to shock you'

He told reporters he knew he was going to get enough votes Friday evening, "because I counted."

The wins vindicated the incongruous air of confidence McCarthy has exuded all week, even as he was bleeding votes and looking like a busted flush.

"We're going to shock you," he promised reporters early Friday as he strolled breezily into the Capitol, where there have already been more rounds of voting than in any speaker election since the Civil War.

Weary lawmakers-elect stuck in Washington voting day after day had been pessimistic about the prospects for a tipping point ahead of the weekend, with McCarthy showing no signs of adding to the base of around 200 Republicans who have backed him all along.

Chip Roy, seen as a figure of stability among the raucous anti-McCarthy group, was given credit for the apparent turnaround after voicing his belief that he could persuade around 10 colleagues to accept the mountain of concessions McCarthy has offered the hardliners.

But Democrats and some of McCarthy's supporters, in private, are concerned that he is offering his far-right critics radical policy commitments that will make the House ungovernable.

There were reports, which AFP has not verified, that McCarthy would propose a $75 billion cut in military spending, raising alarm among defense hawks pushing for the United States to project strength amid Russia's invasion of Ukraine and an emboldened Chinese stance on Taiwan.

No single lawmaker, however senior, has the authority to set budgets but the fact that the suggestion was being taken underscores the Republicans' turn towards isolationism under the leadership of Donald Trump.

Other lawmakers-elect were complaining that McCarthy was handing the hardliners too much power with promises of plum committee posts and changes to the rules that would severely weaken the role of the speaker.

The renegade Republicans are understood to have flipped their votes in exchange for a rule changes making it easier to oust the speaker, reforms to how the House determines federal spending and more "conservative representation" in the chamber.

The fourth day of voting came as Democrats marked the second anniversary of the US Capitol riot by linking the violence to the chaos in the House.

Senate Majority Leader Chuck Schumer said the insurrection -- when a mob of Trump's supporters ransacked the Capitol -- should serve as a "wake-up call" for Republicans to reject extremism.

But he added "the utter pandemonium wrought by House Republicans this week is just one more example of how the extreme fringe of their party, led by election deniers, is pulling them further into chaos."
#Donald Trump