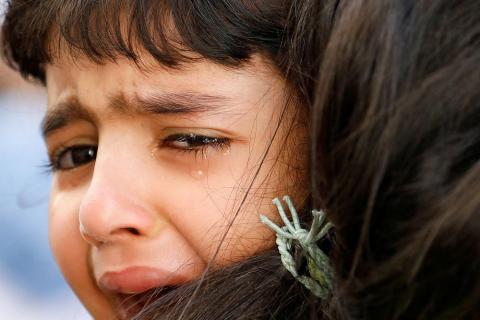 The UN Middle East envoy said 2022 is on course to be the deadliest year for Palestinians in the West Bank since the UN started tracking fatalities in 2005, and he called for immediate action to calm “an explosive situation” and move toward renewing Israeli-Palestinian negotiations.
Tor Wennesland told the UN Security Council that “mounting hopelessness, anger and tension have once again erupted into a deadly cycle of violence that is increasingly difficult to contain,” and “too many people, overwhelmingly Palestinian have been killed and injured.”

In a grim assessment, the special coordinator for the Middle East peace process said the downward spiral in the West Bank and current volatile situation stem from decades of violence that has taken a toll on Israelis and Palestinians, the prolonged absence of negotiations, and the failure to resolve key issues fueling the Israel-Palestinian conflict.

Wennesland said his message to Palestinian officials and factions, Israeli officials and the international community in recent weeks has been clear: “The immediate priority is to work to calm the situation and reverse the negative trends on the ground” but the goal must be “to empower and strengthen the Palestinian Authority and build towards a return to a political process.”

In the past month, the UN envoy said 32 Palestinians including six children were killed by Israeli security forces and 311 injured during demonstrations, clashes, search-and-arrest operations, attacks and alleged attacks against Israelis. Two Israeli forces personnel were killed and 25 Israeli civilians were injured by Palestinians during shooting and ramming attacks, clashes, the throwing of stones and Molotov cocktails and other incidents during the same period, he said.

Wennesland said the month saw “a spike in fatal violence” that has 2022 on track to be the deadliest in the West Bank.

More than 125 Palestinians have been killed in Israeli-Palestinian fighting in the West Bank and east Jerusalem this year. The fighting has surged since a series of Palestinian attacks killed 19 people in Israel in the spring. The Israeli army says most of the Palestinians killed have been gunmen. But stone-throwing youths protesting the incursions and others not involved in confrontations have also been killed.

Israel captured the West Bank in the 1967 Mideast war and has built more than 130 settlements there, many of which resemble small towns, with apartment blocks, shopping malls and industrial zones. The Palestinians want the West Bank to form the main part of their future state. Most countries view the settlements as a violation of international law.

Riyad Mansour, the Palestinian UN ambassador, delivered an impassioned address to the Security Council on Friday, saying: “Our people, our children, our youth are being killed, and they will not die in vain.”

“What happens next is your responsibility,” he told council members. “We knocked on every door, searched for any avenue leading to freedom and dignity, justice and redress, shared peace and security.”

Yet, Mansour said that 75 years after the British partition of Palestine, its people are still waiting “for their turn to be free,” and he accused Israel of “trying to destroy the state of Palestine.”

The Palestinian ambassador challenged the Security Council to protect and promote the two-state solution, and he raised a series of questions that allude to the possibility of further bloodshed and a decades-long fight for freedom if necessary, and possible legal action at the International Court of Justice on Israel’s occupation.

Israel’s UN Ambassador Gilad Erdan countered that the message in Palestinian President Mahmoud Abbas’ speech to world leaders last month and Mansour’s statement Friday were the same: “It is a message of false victimhood, lies of oppression and fictions of aggression.”

“Israel is in the midst of a terror wave,” he told the council. “Since the start of this year alone, there have been over 4,000 Palestinian terror attacks perpetrated against Israelis — car ramming, rock throwing, fire bombings, stabbing, shootings, rockets, and many other acts of Palestinian violence have been become a fact of life for millions of Israelis.”

Erdan said “the Palestinian Authority may play victim here at the council” but he said on the streets of the West Bank cities of Jenin and Nablus they “praise terrorists.”

Palestinian leaders say they want peace but Erdan said “they consistently refused to sit down at the negotiating table with Israel and have rejected every peace plan placed before them.”

At the General Assembly last month, Abbas launched a campaign for full membership at the United Nations “while bypassing the negotiating table,” Erdan said. Palestine is currently a non-member observer state at the UN.

Erdan stressed that “peace can only be achieved through direct negotiations and mutual — I repeat mutual — concessions.”