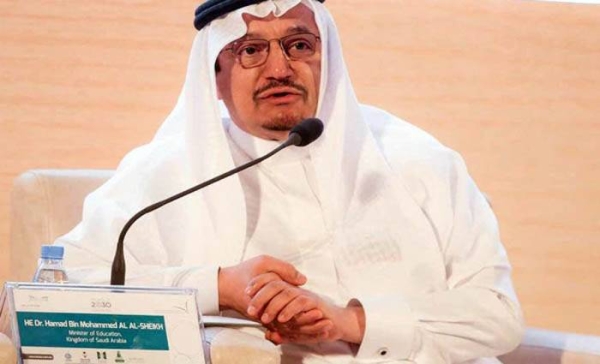 Dr. Al-Sheikh to speak on learning from challenges in London’s Education World Forum 2022

Minister of Education Dr. Hamad Bin Mohammed Al-Sheikh is scheduled to participate in the Education World Forum 2022 to be held in London, UK, under the theme “Education: building forward together; stronger, bolder, better”, from May 22 to 25, with the participation of several education ministers from around the world.
Dr. Al-Sheikh, who will be heading the Kingdom’s delegation to the forum, is set to deliver Saudi Arabia's speech focusing on (Learning from Challenges) during the first session of the forum, highlighting Saudi Arabia's experience in facing the repercussions of the coronavirus pandemic and reviewing the most prominent features of its success in the e-learning and distance education.

Dr. Al-Sheikh’s visit to the UK includes meetings with several of his counterparts and officials including the British Secretary of State for Education Nadhim Zahawi; the Special Representative of the Prime Minister of the UK for Education Dr. Sir Steve Smith; British Secretary of State at the Department of Business, Energy and Industrial Strategy; and head of the British side of the Saudi-British Partnership Council Kwasi Kwarteng.

On the sidelines of the event, Al-Sheikh is scheduled to meet with the CEO of the British Council, the CEO of Microsoft International, and Saudi Ambassador Prince Khalid Bin Bandar Bin Sultan, as well as executive leaders of various educational publishing houses and institutions.

The Minister's participation in the forum also includes several visits to prestigious universities and educational institutions in the UK, including University College London, Oxford University, the Center for Artificial Intelligence, and the Oxford/AstraZeneca Vaccine Medical Center.

The minister is also scheduled to visit a special education center in addition to a visit to the Saudi Cultural Attaché in London, where he will be meeting with Saudi students studying in British universities.
#AstraZeneca  #Coronavirus  #vaccine