Known as 'the Bride of the Red Sea', Jeddah is the second largest city in Saudi Arabia with a fascinating history that spans thousands of years of civilisation pre-dating both Islam and Christianity.

According to legend, it was Jeddah that Eve chose to live in when Adam and Eve descended onto Earth. Today, the mother of all humanity is said to be buried in a tomb in central Jeddah, sealed by religious authorities since 1975 to prevent pilgrimage there.

Jeddah is believed to have been first permanently settled around 522 BCE by members of the Quda'a tribe, natives of modern-day Yemen. But despite its long pre-Islamic history, it was under the Rashidun Caliphate, the first Muslim Caliphate established following the death of Prophet Muhammad (peace be upon him), that Jeddah acquired prominance and established its commercial foundations which made it into the prosperous port city of today.

The old town of Jeddah, the historic part of the city referred to in Arabic as 'Al-Balad', dates back to the seventh century, when the third Muslim Caliph Uthman Ibn Affan made it the official seaport for the holy city of Makkah. It became the landing harbour welcoming all Muslim pilgrims who reached Arabia by sea.

Jeddah has since served as a gate and passageway for Muslim pilgrims to the holy city. People of various cultures and backgrounds would pass through the coastal city on their way to perform Hajj, the annaul Muslim prilgramage to Makkah, or Umrah, a lesser pilgramage undertaken at various times throughout the year.

After the opening of the Suez Canal in 1869, Indian Ocean sea trade flourished in the historic city making Jeddah an even more significant cosmopolitan and commercial hub which continues to serve millions of Muslim pilgrims annually. 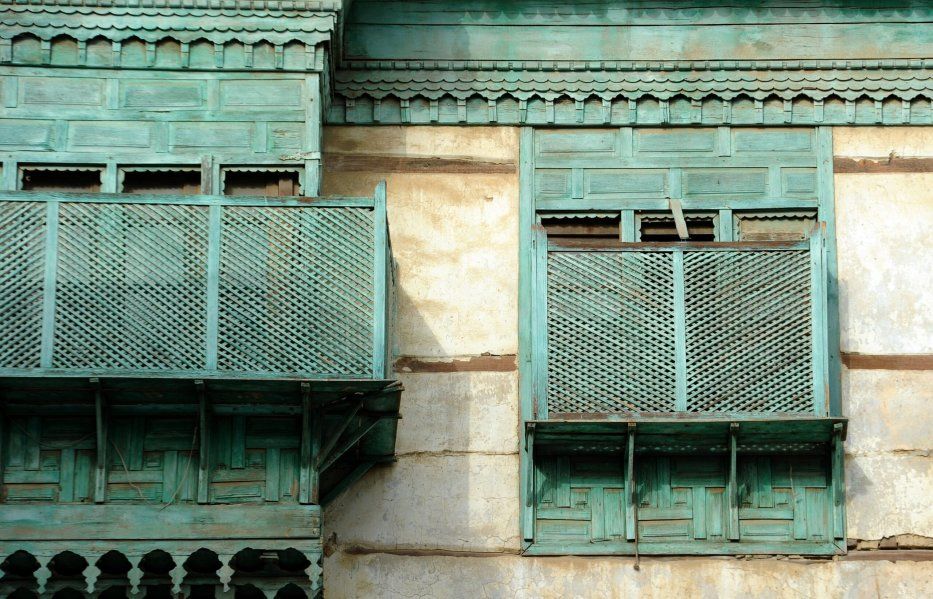 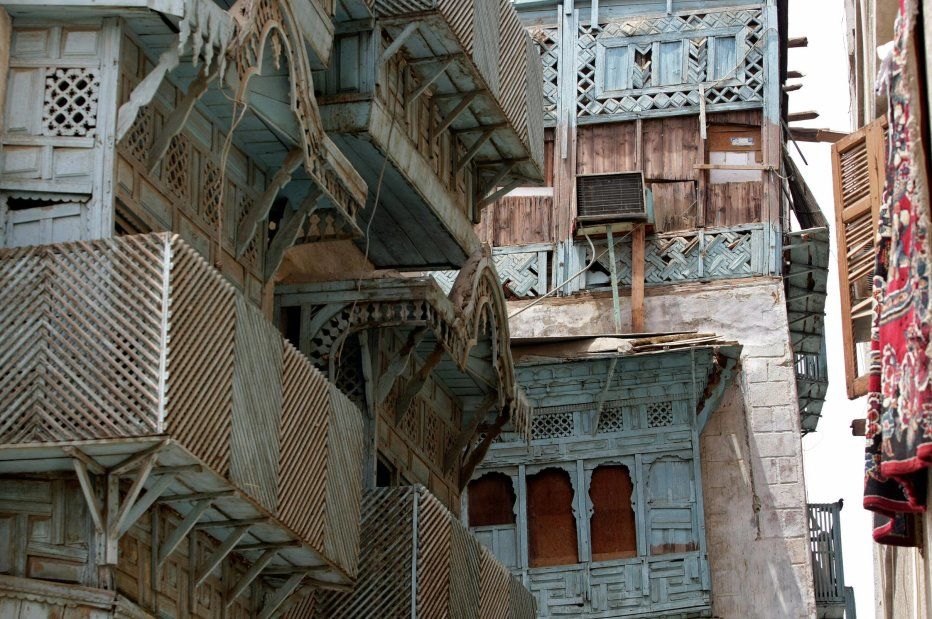 Today the city is home to Saudi's newly established tourism industry which sees locals set sail in cruises along the Red Sea. Although Jeddah's location on the Red Sea has turned it into one of the kingdom's primary resort cities, marked by lavish skyscrapers and seaside hotels, the old town continues to retain its traditional architecture, ambience and unique Red Sea coral construction.

Walking through Al-Balad, one can marvel at the centuries-old coral tower houses the historic town is famous for. The intricately designed structures, built using coral from the depths of the Red Sea, feature captivating colourful wood-latticed rawasheen balconies, known as mashrabiyyahs. One of the best-preserved examples of these is Naseef House, which was once the royal residence of Saudi Arabia's founding father King Abdulaziz who made it his home after conquering Jeddah in 1925. The house is now a museum and cultural centre, with medieval Portuguese cannons sitting near its entrance in the shade of a large, old tree believed to have been the only tree in all of Jeddah in the 1920s.

As one might expect there is no shortage of mosques throughout the city, most famed among them is the floating mosque perched at the northern tip of the city's waterfront. But one particular historical mosque in the old town stands out as a witness to the early days of Islam outside of the holy cities of Makkah and Madinah. The ancient Al-Shafi'i Mosque, named after the renowned Muslim theologian Imam Al-Shafi'i, was originally built during the rule of the second Muslim Caliph Omar Bin Al-Khattab and continues to function as a place of worship today. Made of sea mud, brick, stone and wood, it also forms a valuable piece of the archaeological heritage of historic Jeddah and is certainly one of its architectural highlights.

Al-Balad is dotted with numerous old souqs and bazaars, lined by charming small shops that sell everything from Arabian dates, to spices, honey, souvenirs, silver and gold ornaments and textiles. As the sun sets and the heat and humidity abate, these traditional marketplaces awaken and start buzzing with visitors and pilgrims who stroll through their narrow maze-like alleyways to get lost in the fragrant scents and vivid colours of open spice sacks, perfumes and dazzling gold woven textiles.

It is no surprise that Al-Balad is recognised as a UNESCO World Heritage Site. Not only does this historic town define the architectural and historical identity of the region, but it also stands as a living witness to the early Islamic period and how it ties to the present day. 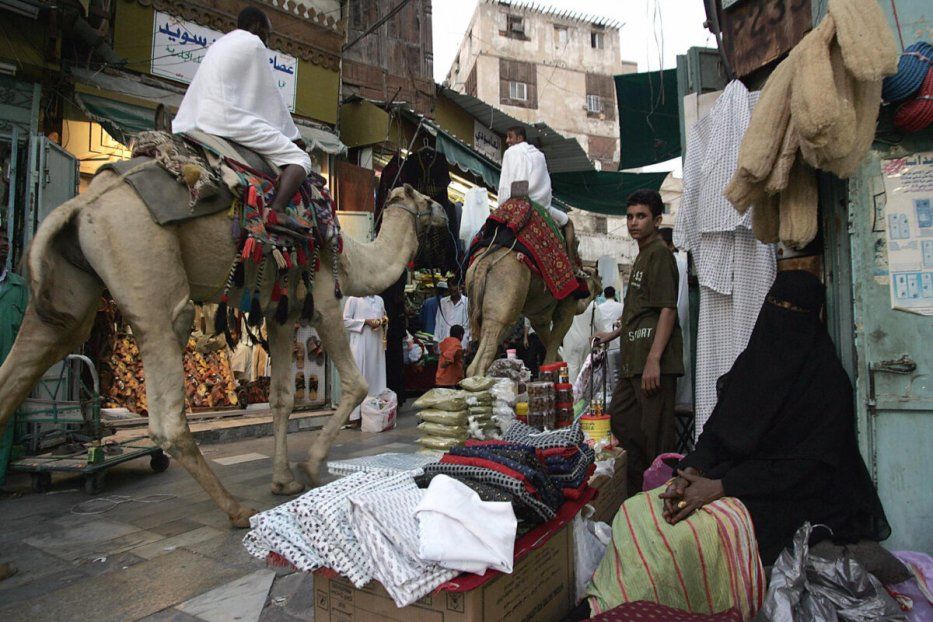 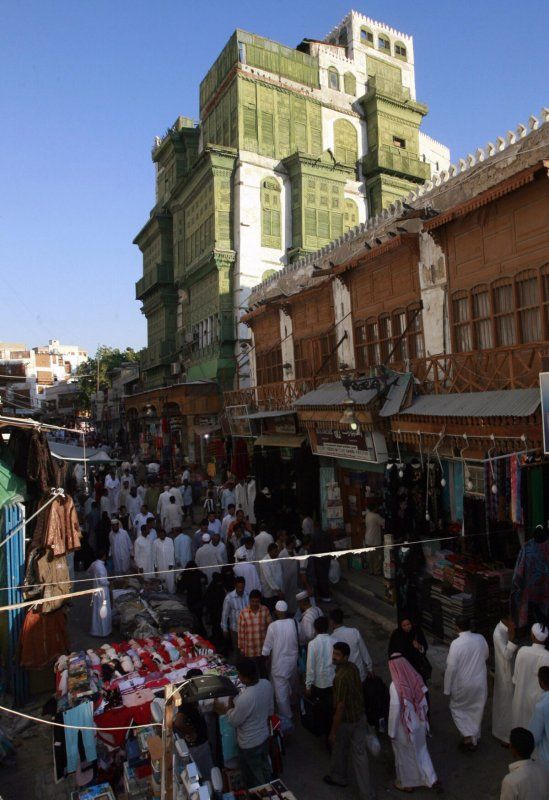 People walk past the historical house of ‘Nur Wali’ in the old Souq al-Alawi market in the Saudi Red Sea port city of Jeddah on November 28, 2008