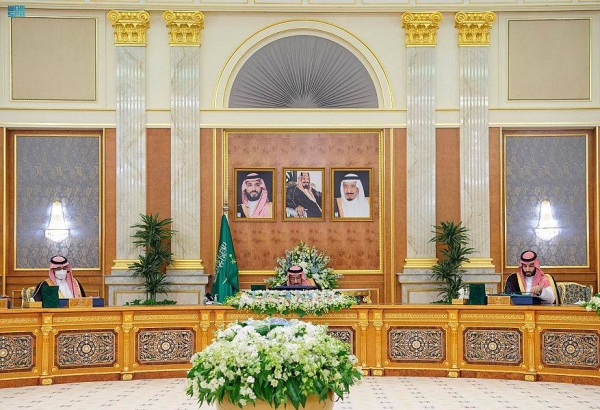 The Cabinet, chaired by Custodian of the Two Holy Mosques King Salman at Al-Salam Palace here on Tuesday afternoon, highly valued the contents of the annual speech of the Custodian of the Two Holy Mosques upon opening the activities of the (3rd) year of the (8th) session of the Shoura Council.
The Cabinet members also hailed the constants of the Kingdom’s internal and external policy, as well as the achievements of the Vision 2030 of strategies, programs and projects to create a better future for the country and its citizens, in addition to the Kingdom's positions and international initiatives in support of the goodness of humanity.

The Cabinet was briefed on the content of the talks that took place between the Kingdom and a number of countries recently, including the two messages received by Custodian of the Two Holy Mosques and the Crown Prince, from King of the Kingdom of Morocco, and related to the bilateral relations between the two fraternal countries and peoples, and ways to support and strengthen them in various fields.

The Cabinet was apprised of the content of the phone call made by the Crown Prince to the President of Ukraine, during which the Kingdom’s position in support of everything that contributes to reducing the escalation in Ukraine, and its willingness to continue mediation efforts, was confirmed.

The Cabinet also touched on the overall discussions of the Crown Prince with the South African president, and the outcomes of his official visit to the Kingdom in signing agreements and memoranda of understanding between the two countries with an estimated value of more than ($15 billion), and agreement on the importance of strengthening joint action in order to advance the bilateral relations between the two countries to new and promising horizons in various fields.

In his statement to the Saudi Press Agency (SPA) following the session, the Minister of State, Cabinet's Member for Shpura Council Affairs and Acting Minister of Media, Dr. Essam Bin Saad Bin Saeed, stated that the Cabinet welcomed the signing of partnerships and agreements by the private sector in the Kingdom and the Sultanate of Oman.

The agreements aimed at opening up prospects for cooperation in the growth of the digital economy, enhancing innovation, developing digital government, expanding technical exports and investment partnerships, and e-commerce activity.

The Cabinet reviewed a number of regional and international issues, reiterating the Kingdom's assertion during a Security Council session on Yemen that it continues to support international efforts to bring peace to Yemen, and called on the international community to classify the Houthi militia as a terrorist group, boycott it and dry up its sources of funding.

The Cabinet approved a memorandum of understanding in the field of cybersecurity between the National Cybersecurity Authority in Saudi Arabia and Naif Arab University for Security Sciences. It also approved the national strategy for industry.

The Cabinet also reviewed several issues on its agenda, including the annual reports of the Ministry of Sports, the sector of National Technology Development Program (NTDP), and the National Center for the Promotion of Mental Health and took necessary procedures regarding them.