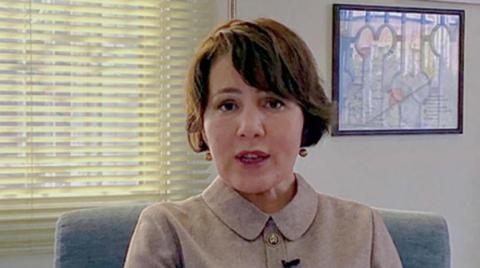 WHO Staffers in Syria Accuse Their Boss of Corruption

Staffers at the World Health Organization’s (WHO) Syrian office have accused their boss of mismanaging millions of dollars, plied government officials with gifts -- including computers, gold coins and cars -- and acted frivolously as COVID-19 swept the country.
More than 100 confidential documents, messages and other materials obtained by The Associated Press show WHO officials told investigators that the agency’s Syria representative, Dr. Akjemal Magtymova, engaged in abusive behavior, pressured WHO staff to sign contracts with high-ranking Syrian government politicians and consistently misspent WHO and donor funds.

Magtymova declined to respond to questions about the allegations, saying that she was “prohibited” from sharing information “due to (her) obligations as a WHO staff member.” She described the accusations as “defamatory.”

Complaints from at least a dozen personnel have triggered one of the biggest internal WHO probes in years, at times involving more than 20 investigators, according to staffers linked to the investigation.

WHO confirmed in a statement that it “has been a protracted and complex investigation.”

The agency said progress has been made in recent months in assessing the complaints regarding Magtymova and gathering relevant information.

“In view of the security situation, confidentiality and respect for due process do not allow us to comment further on the detailed allegations,” WHO said. It gave no timeline for when the investigation was expected to be completed.

WHO’s Syria office had a budget of about $115 million last year to address health issues in a country riven by war -- one in which nearly 90% of the population lives in poverty and more than half desperately need humanitarian aid.

For several months, investigators have been probing several allegations, including a party Magtymova once threw costing thousands of dollars -- a gathering held mostly to honor her own achievements at WHO’s expense.

In December 2020, deep in the first year of the pandemic, she instructed the Syria office to learn a flash mob dance popularized by a social media challenge for a year-end UN event. At the time, senior WHO officials in Geneva were advising countries to implement coronavirus measures including the suspension of any non-essential gatherings.

“Kindly note that we want you to listen to the song, train yourself for the steps and shoot you dancing over the music to be part of our global flash mob dance video,” wrote WHO communications staffer Rafik Alhabbal in an email to all Syria staff. Magtymova separately sent a link to a YouTube website, which she described as “the best tutorial.”

Multiple videos show staffers, some wearing WHO vests or jackets, performing “the Jerusalema challenge” dance in offices and warehouses stocked with medical supplies.

Magtymova is also accused of “providing favors” to senior politicians in the Syrian regime and meeting surreptitiously with the Russian military, potential breaches of WHO’s neutrality as a UN organization.

In one complaint sent to WHO Director-General Tedros Adhanom Ghebreyesus in May, a Syria-based staffer wrote that Magtymova hired the incompetent relatives of government officials, including some accused of “countless human rights violations.

In May, WHO’s regional director in the Eastern Mediterranean appointed an acting representative in Syria to replace Magtymova after she was placed on leave. But she is still listed as the agency’s Syria representative in its staff directory.

Numerous WHO staffers in Syria have told the agency’s investigators that Magtymova failed to grasp the severity of the pandemic in Syria and jeopardized the lives of millions.

Staffers also questioned some of Magtymova’s own behavior and directives to staff as coronavirus cases spiked worldwide -- and even as WHO’s chief claimed that the entire organization was working “tirelessly” to stop COVID-19.

At least five WHO personnel complained to investigators that Magtymova violated WHO’s own COVID-19 guidance. They said she did not encourage remote working, came to the office after catching COVID and held meetings unmasked. Four WHO staffers said she infected others.

Among the incidents being probed is a party Magtymova organized last May, when she received a leadership award from Tufts University, her alma mater.

Held at the exclusive Four Seasons hotel in Damascus, the party included a guest list of about 50, at a time when fewer than 1% of the Syrian population had received a single dose of COVID-19 vaccine.

The evening’s agenda featured remarks by the Syrian minister of health, followed by a reception and nearly two hours of live music.

WHO documents show while the event was called to celebrate WHO’s designation of 2021 as the Year of Health and Care Worker, the evening was devoted to Magtymova, not health workers. The cost, according to a spreadsheet: more than $11,000.

Other WHO officials were concerned with Magtymova’s spending and told investigators that she was involved in several questionable contracts, including a transportation deal that awarded several million dollars to a supplier with whom she had personal ties.

At least five staffers also complained Magtymova used WHO funds to buy gifts for the Ministry of Health and others, including “very good servers and laptops,” gold coins and expensive cars. The AP was not in a position to corroborate their allegations.

Several WHO personnel said they were pressured to strike deals with senior members of the Syrian government for basic supplies like fuel at inflated prices, and were sidelined if they failed to do so.

The accusations regarding WHO’s top representative in Syria come after multiple misconduct complaints at the UN health agency in recent years, including sex abuses in Congo and racist behavior by a senior WHO official in the Western Pacific.

Javier Guzman, director of global health at the Center for Global Development in Washington, said the latest charges regarding WHO’s Magtymova were “extremely disturbing” and unlikely to be an exception.

“This is clearly a systemic problem,” Guzman said. “These kinds of allegations are not just occurring in one of WHO’s offices but in multiple regions.”

He said though Tedros is seen by some as the world’s moral conscience during COVID-19 -- he repeatedly decried vaccine inequity and called for countries to act in solidarity -- the agency’s credibility was severely damaged by reports of misconduct.

Guzman called for WHO to publicly release any investigation report into Magtymova and the Syria office.
#Coronavirus  #COVID-19  #vaccine  #Covid