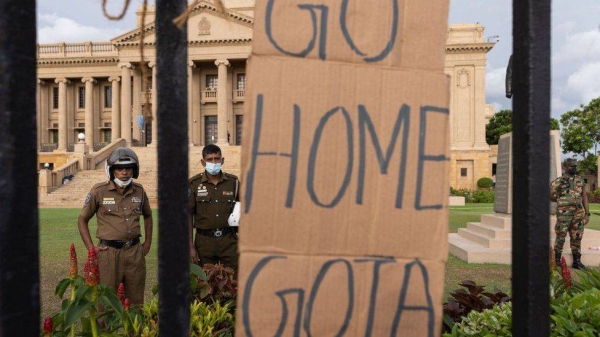 Sri Lankans have criticized a Wednesday night speech by President Gotabaya Rajapaksa in which he ignored calls to resign and vowed to restore order.
In his first national address since protests began last month, he offered to cede some of the presidency's power to parliament, but set no timetable.

Sri Lankans who have been calling for him to resign over an unprecedented economic crisis were unimpressed.

Many said the speech failed to address the real issues.

"Where were you for the last 30 days? People don't have medicine, people don't have food, the entire country's at a standstill," Kavindya Thennakoon, a protester in Colombo, told the BBC.

"The reforms he's suggesting are not what we need. What we need right now is for [the president] to resign from office... It baffles my mind that Gotabaya Rajapaksa doesn't understand that."

On social media, many referred to the resignation of Prime Minister Mahinda Rajapaksa - the president's brother - earlier this week as they called for him to quit too. "One down. One more to kick out," read one tweet on Thursday morning.

"You should have advised your ministers and your own brother Mahinda against influencing their goons to initiate a wave of terror. If not for their stupidity, Sri Lanka would not have experienced a wave of violence," another tweet read.

Weeks of peaceful protests against the government turned violent on Monday, after supporters of Mahinda Rajapaksa attacked anti-government demonstrators and destroyed two protest sites where thousands had congregated.

Though the older Rajapaksa brother quit as PM shortly after, angry mobs have since been targeting property belonging to the family and other politicians supporting them.

Violence was reported on both Monday and Tuesday nights. Shops near Colombo were torched, as well as a resort owned by one of Mahinda's sons.

The two-time former president is now holed up in a naval base in the north-east of the country for his own safety, the military has confirmed.

Security forces are deployed across Sri Lanka with orders to shoot looters on sight.

Gotabaya Rajapaksa made no mention of the role of pro-government supporters in triggering the violence, only condemning the actions of the mobs and vowing to bring down the full force of the law against them.

A nationwide curfew that shut shops, businesses and offices was lifted for a few hours on Thursday morning, but will be reimposed in the afternoon.

The BBC's Anbarasan Ethirajan, in Colombo, reports that residents started lining up outside petrol stations even before the curfew was lifted. More vehicles could be seen on the roads as people rushed out to buy essentials.

Sri Lankans are desperate as basic items like food and fuel run out or become unaffordable.

Its dire financial situation has caused the Sri Lankan rupee to plunge, provoking severe shortages of basic items such as food, fuel and medical supplies.

The government blames the Covid pandemic, which all but killed off Sri Lanka's tourist trade - one of its biggest foreign currency earners.

It also says tourists were frightened off by a series of deadly bomb attacks on churches three years ago.

However, many experts say economic mismanagement is to blame.

There is a great deal of anger against the Rajapaksa family. Many people believe Mahinda Rajapaksa paved the way for his relatives to plunder the country's wealth for their own financial gain.

All the president's brothers, as well as some of his nephews, held key positions in the government before continued protests forced them to step down.

During his nationwide address, Mr Rajapaksa said he would appoint a new prime minister who commanded the majority of support in parliament, as well as a new cabinet.

The frontrunner is speculated to be Ranil Wickremesinghe, who has been on Sri Lanka's political scene for decades and has served several stints as prime minister.

If appointed, experts say he would be likely to guarantee the security of the Rajapaksa family and any safe passage they might request. But he is not universally favoured within the opposition or among the public.

Gotabaya Rajapaksa had said earlier he was holding talks with other political parties aimed at forming a unity government. But the main opposition said it would not be part of the interim administration unless the president stands down.

The political stalemate comes as Sri Lanka attempts to iron out a bailout package with the International Monetary Fund (IMF) - the island's $81bn economy is near bankruptcy.

It has suspended its foreign debt payments, largely because it cannot service loans from China that paid for massive infrastructure projects.

While the pandemic hit the vital tourism sector and shrank Sri Lanka's earnings and foreign exchange reserves, experts say problems have been exacerbated by populist tax cuts in 2019 and a disastrous ban on chemical fertilisers in 2021 that devastated crop yields.
#Covid