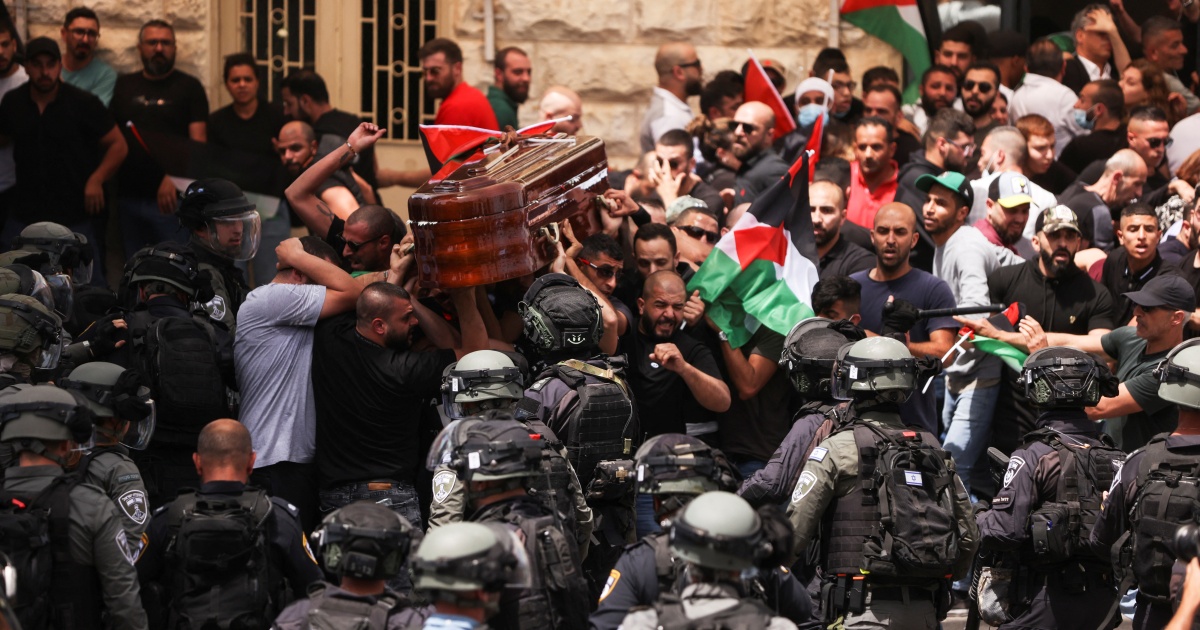 Shireen Abu Akleh: US is no ‘objective observer’, advocates say

With US aid flowing to Israel, Palestine rights activists say Washington is ‘complicit’ in Israeli abuses.

The United States needs to “look in the mirror” and reassess its unconditional support for Israel, Palestinian rights advocates say, as calls to condition billions in annual US aid are growing in the aftermath of Al Jazeera journalist Shireen Abu Akleh’s killing.

The US State Department has urged an “immediate and thorough” investigation into the killing of Abu Akleh, a US citizen, who was shot dead by Israeli forces in the occupied West Bank this week.

“There’s deep, deep hypocrisy and irony to US officials calling for an investigation when what they really need to do is look in the mirror,” said Elias Newman, communications director at IfNotNow, a youth-led, anti-occupation Jewish American group.

President Joe Biden and his top aides have repeatedly promised not to condition, restrict or reduce US aid to Israel, which totals $3.8bn annually.

Jinan Deena, national organiser for the American-Arab Anti-Discrimination Committee (ADC), noted that Abu Akleh became the second US citizen to be killed by Israeli forces this year, after 78-year-old Omar Assad died after being detained in the West Bank in January.

Deena said Palestinian Americans such as herself do not feel protected by their own government when they travel to visit family in Palestine.

“We are Americans and we are paying taxes, and that money is literally going not just to abuse our families back home and Palestinians back home, but also us now,” Deena told Al Jazeera. “A lot of us are very afraid to go [to Palestine] this year.”

Footage of the attack prompted an outcry across the world, with Secretary of State Antony Blinken saying he was “deeply troubled” by the images. “Every family deserves to lay their loved ones to rest in a dignified and unimpeded manner,” he wrote on Twitter.

US envoy to the United Nations Linda Thomas-Greenfield also said she was “deeply distressed”.

But Thomas-Greenfield has made it clear – even before the US Senate confirmed her to the post last year – that shielding Israel from criticism at the United Nations would be one of her top priorities.

Israel has been the US’s top ally in the Middle East for decades, with presidents and legislators from both major parties asserting their staunch commitment to the country. In addition to the $3.8bn in US aid that Israel receives annually, this year Washington added another $1bn to “replenish” its Iron Dome missile defence system after a May 2021 Gaza conflict.

Against that backdrop, Maya Berry, executive director of the Arab American Institute (AAI), a Washington-based think-tank, said it is clear that Washington is not an impartial player in the Israeli-Palestinian conflict.

“We are not an objective observer here,” Berry told Al Jazeera earlier this week, referring to the US government. “We’re fully engaged in supporting the state of Israel as it commits these abuses.”

In recent years, progressive activists and US lawmakers have tried to restrict aid to Israel or condition it on ending violations against Palestinians, but the push remains largely confined to the left wing of the Democratic Party.

As a candidate in 2020, Biden dismissed the idea of conditioning Israel aid, which was championed by Senator Bernie Sanders during that year’s Democratic primaries, as “bizarre”.

After being elected to the presidency, his top aides, including Vice President Kamala Harris, have pledged that the aid would not be restricted under any circumstances. That position has not changed, even as leading rights groups, including Human Rights Watch and Amnesty International, accused Israel of committing apartheid against Palestinians.

“The United States government is complicit and is a perpetrator of Israeli war crimes because of the aid that they give them, the unconditional support, the blank cheques,” Deena told Al Jazeera.

“The US is 100 percent hand in hand with Israel when it comes to these abuses that are happening.” 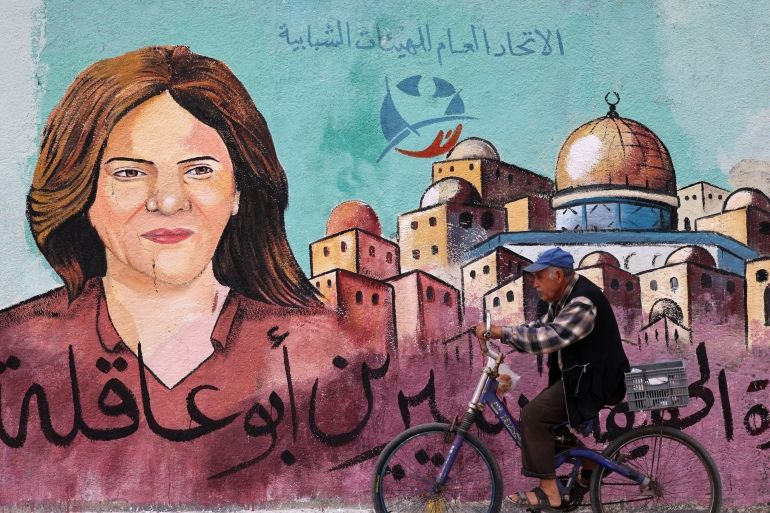 A Palestinian man rides his bicycle in front of a mural in honour of Abu Akleh, in Gaza City

Last year, Democratic Congresswoman Betty McCollum introduced legislation that would ensure that US aid is not used to fund Israel’s human rights abuses.

The proposal has garnered 32 co-sponsors, but it has not moved through the legislative process beyond its formal introduction.

“The killing of any journalist is a tragedy, but the murder of Shireen Abu Akleh, a Palestinian-American journalist reporting on the Israeli government’s occupation of Palestinian lands, is a crime that demands accountability and consequences, not impunity,” McCollum told Al Jazeera in an email on Friday.

“I’ve called for restrictions on US aid to Israel to ensure our tax dollars are not funding blatant human rights abuses – and such restrictions should certainly be applied to this situation if Israeli security forces are found responsible for Shireen’s death.”

“However, we have a political class that remains dominated by outdated attitudes of never questioning support for Israel, and in a political environment where the Israel lobby continues to influence policy in ways that Americans simply don’t support,” he told Al Jazeera.

Still, Baddar said having progressives calling for accountability for Israeli human rights violations and ensuring that US taxpayer dollars are not used to commit them is a “powerful development”.

“But we have to continue building on it and increasing public pressure until it can be translated into a shift in real policy,” he said.

For her part, Congresswoman Rashida Tlaib slammed US aid to Israel after the attack on Abu Akleh’s funeral on Friday.

“This is sickening. Violent racism, enabled by $3.8B in unconditional military US funds,” she wrote on Twitter in response to the footage showing Israeli officers beating pallbearers carrying Abu Akleh’s coffin with batons.

“For the Israeli apartheid [government], Shireen’s life didn’t matter – and her dehumanization continues after death.”