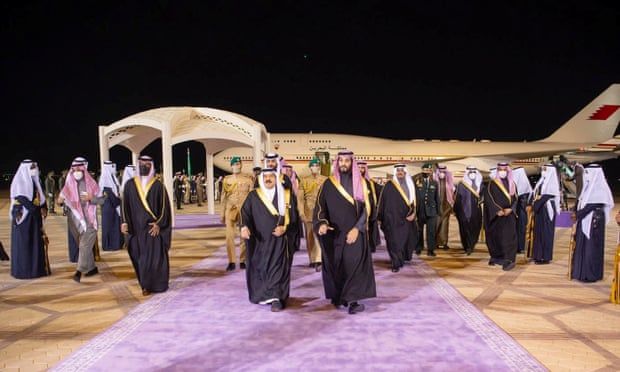 With the king barely seen for 20 months, the crown prince is holding the reins of power – and unbothered by who knows it
Beaming in satisfaction as Arab rulers arrived in Riyadh on Tuesday, Mohammed bin Salman looked like a man in charge. As a succession of planes disgorged heads of state for a regional summit, the Saudi crown prince was there to receive them – standing in for his father at yet another big event.

But as Prince Mohammed ushered leaders of Kuwait, the UAE, Qatar, Oman and Bahrain along a purple carpet to a reception hall, the king’s absence loomed large. If the ailing monarch was to reappear in public – a once every five year gathering under his auspices would have been the time and place.

To regional figures, King Salman’s failure to assume his role signalled something more consequential than an heir to the throne being gifted more responsibilities. So significant was the missing monarch that observers in Saudi Arabia say the dynastic shift from father to son has – for all intents and purposes – already taken place.

Over the past 20 months, King Salman has made only one public appearance and has stayed for the duration of the Covid pandemic in the new age city of Neom – the pet project of the man who will one day formally take his throne.

His only recent visit to the seat of Saudi power, Riyadh, was in August 2020 for a successful gallbladder operation. His last audience with a western official was with former UK foreign secretary, Dominic Raab, five months earlier. When Emmanuel Macron met Mohammed bin Salman in Jeddah recently, the king was again nowhere to be seen.

Macron’s visit, the first by a western head of state since the assassination of columnist Jamal Khashoggi three years ago, marked quite a moment for a kingdom anxious to restore standing amid the prolonged global fallout from an extraordinary scandal. King Salman receiving the French president could have been a much-needed kickstart.

Several influential former Saudi officials say they cannot recall a precedent of a Saudi head of state being in the country and not receiving counterparts such as Gulf leaders and Macron, particularly at such a critical juncture. For all intents and purposes, Salman is now king in absentia and seems barely to be performing his duties. Prince Mohammed holds all the reins of Saudi power, and does not seem bothered by who knows it.

Hanging over the absences have been enduring questions surrounding the king’s health. Due to turn 86 on New Year’s Eve, Salman has slowed down since his own years as crown prince. But he is known, both inside the kingdom and in Washington and London, to suffer from a slow onset form of vascular dementia, the symptoms of which were thought to have been mild.

“This has not been a huge factor in recent years, and it is tough to get a read on now with Covid,” said a former western intelligence official. “But it is thought to be more problematic now. It’s certainly a pretext for MbS to keep his father at bay. He is definitely running Saudi Arabia. His father is not.”

Announcing the kingdom’s budget on Monday via video, the king spoke slowly and with a slight slur. Guests who had seen him before Covid brought the shutters down in Saudi Arabia say he was already moving and speaking cautiously. But recent video appearances at cabinet sessions have left some participants speculating about his health.

Whether King Salman’s quasi exile is of his own volition, or is beyond his control, has become the subject of speculation inside the kingdom and around the Gulf, where leaders in the UAE, Qatar, Bahrain, Kuwait and Oman had been wrestling with the uncertain dynamic between father and son since the latter’s rise to prominence nearly five years ago.

As Prince Mohammed consolidated his power by eliminating family and political rivals, shaking down business leaders and clamping down on dissent, the role of King Salman had remained hotly debated.

In the aftermath of the Khashoggi assassination, Salman took a more assertive stance, appearing more often and reassembling a sidelined old guard as a veritable “court of the wise”. The Turkish president, Recep Tayyip Erdoğan, thought the “greybeards” were back calling the shots. He sent a message through the king’s trusted relative, Khaled al-Faisal, that he respected the House of Saud, but not what it was becoming – a pointed barb at Prince Mohammed, whom Turkey, the CIA and other western agencies believe directed Khashoggi’s murder and dismemberment inside the Saudi consulate in Istanbul.

But if Prince Mohammed ever really was chastened, it was not to be for long. By the second half of 2019, officials who dealt with him in Riyadh say he was directing affairs with confidence, ramping up economic reforms and signing off on cultural changes that would have been unthinkable even several years earlier.

King Salam arrived in Neom 15 months ago to sit out Covid. The futuristic Red Sea city has been a viable place to avoid infection and from where to conduct virtual cabinet meetings. But as the crisis has ebbed in Saudi Arabia, so has the plausibility of such a long absence from making in person appearances. The one break from reclusivity came when he received the Sultan of Oman, Prince Haitham bin Tarik in July.

The lineup of missed opportunities includes annual appearances in Mecca for the last 10 days of Ramadan and hajj, celebrations for the seventh year of his inauguration, the festival season in Riyadh and weekly royal court receptions.

“He has cleared his path to the coronation,” the former intelligence official said of the crown prince. “Covid or not, no one can deny that the king is not just missing in action, but likely out of business.”
#Jamal Khashoggi  #Dominic Raab  #Covid  #Raab