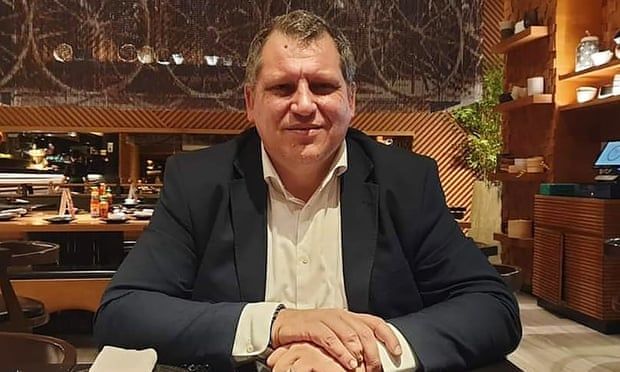 Exclusive: Pether, who has been imprisoned for 14 months in Baghdad, has become ‘gravely ill’ according to his family
The prime minister, Anthony Albanese, has raised the case of jailed engineer Robert Pether with the Iraqi leader, Mustafa al-Kadhimi, as the Australian’s family warns he has become “gravely ill” and is rapidly deteriorating in his Baghdadi jail cell.

Pether has now been imprisoned for more than 14 months following a commercial dispute between his engineering firm and Iraq’s central bank, which had hired Pether’s company to help build its new Baghdad headquarters. Pether’s family say he is innocent and the trial was unfair and compromised.

His family have become increasingly desperate and have implored the Australian government to do more to secure his release.

Guardian Australia understands Albanese last week raised the Pether case during a discussion with Kadhimi, a move that drew praise from Robert’s wife, Desree, who said it was a marked departure from the former government’s approach.

She said Robert had learned of the call and was immensely grateful. He was penning a letter to Albanese directly to express his thanks, Desree said.

“He is afraid to be ‘hopeful’,” she told Guardian Australia. “But he is immensely grateful to Anthony Albanese and Penny Wong for stepping up and taking action pretty much straight away.”

She said he had lost more than 40 kilograms and all muscle mass. A new mole has appeared on an ear on which he previously had a melanoma, and his family say it has “changed dramatically in the past couple of months”.

“He is also still suffering from dizziness and low blood pressure. He is declining rapidly.”

The office of Kadhimi, the Iraqi prime minister, confirmed his discussion with Albanese, saying the two leaders covered “bilateral relations between the two countries … [and] stressed the importance of strengthening joint cooperation”.

“His physical and mental health is at grave risk.”

“The Albanese Labor government’s attention to Robert’s situation has been welcomed by Robert’s family as a positive step forward. There is also strong bipartisan support for Robert’s safe release.”

Khalil said he wrote to the Iraqi ambassador in April 2022 along with Liberal senator James Paterson, urging the Iraqi government to work constructively with Australia for a “speedy resolution” to the case, given the impact it was having on Pether’s physical and mental health.

Pether and his colleague, Egyptian national Khalid Radwan, were arrested in Baghdad in April 2021 after they returned to Iraq to resolve a business dispute between the government and their employer, CME Consulting, which was working on the new headquarters for the Central Bank of Iraq.

In a trial a UN working group found was deeply compromised, including due to allegations of charges being changed mid-trial, both men were convicted of fraud and sentenced to five years in prison. They were also ordered to pay a US$12m fine over allegations that his firm spent money that should have gone to an architect and a subcontractor.

The UN Working Group on Arbitrary Detention, in a report released in March, judged the men’s detention to be arbitrary, a breach of international law, and demanded their immediate release.

The report said it had received allegations that “[Pether] was exposed to extreme cold, threats of death, humiliation and various forms of psychological abuse.”

According to the complaint, “Pether was detained in a [two-by-2-metre] cell with the lights permanently on”.

“He was reportedly blindfolded, interrogated, screamed at, threatened, insulted and shown torture rooms.”

“In the first 12 days of detention, Mr Pether lost 15kgs and became severely dehydrated. He was barred from any contact with the outside world for the first 19 days of his detention and was permitted to go outside for only two hours,” the complaint said.

The report also said Pether was reluctant to speak out about his experiences in jail because of serious fears of reprisal.

The working group found reports of “abusive and coercive interrogations” to be credible. It also found credible allegations Pether had been forced to sign a statement in Arabic, which he could not read. Iraqi authorities also likely obtained evidence from him improperly and after ill-treatment and torture, the report says.

“The Working Group expresses its gravest concern at the allegations of torture and ill-treatment, which constitute a prima facie breach of the absolute prohibition of torture, which is a peremptory norm of international law.”

The report found the pair were given no reason for their arrest at the time of their detention. For the next three days, no one knew their whereabouts or situation.

Enforced disappearance of this kind was a “particularly aggravated form of arbitrary detention”, the report said.

“Pether and Radwan were held in a situation of de facto enforced disappearance,” the report said. “Such deprivation of liberty, entailing a refusal to disclose the fate or whereabouts of the persons concerned or to acknowledge their detention, lacks any valid legal basis under any circumstance.”

The working group said the men’s trial was compromised. Its report said it viewed with concern allegations Pether’s evidence was mistranslated to indicate guilt and said that even during the trial, “Pether and Radwan did not have clarity around their charges”, as charges were dropped during the hearing and replaced with others.

The report said “the violations of the right to a fair trial and due process [were] of such gravity” as to make Pether and Radwan’s deprivation of liberty “arbitrary”, and therefore unlawful under international law.

The UN received no response from the Iraqi government to the allegations, something it said was regrettable.