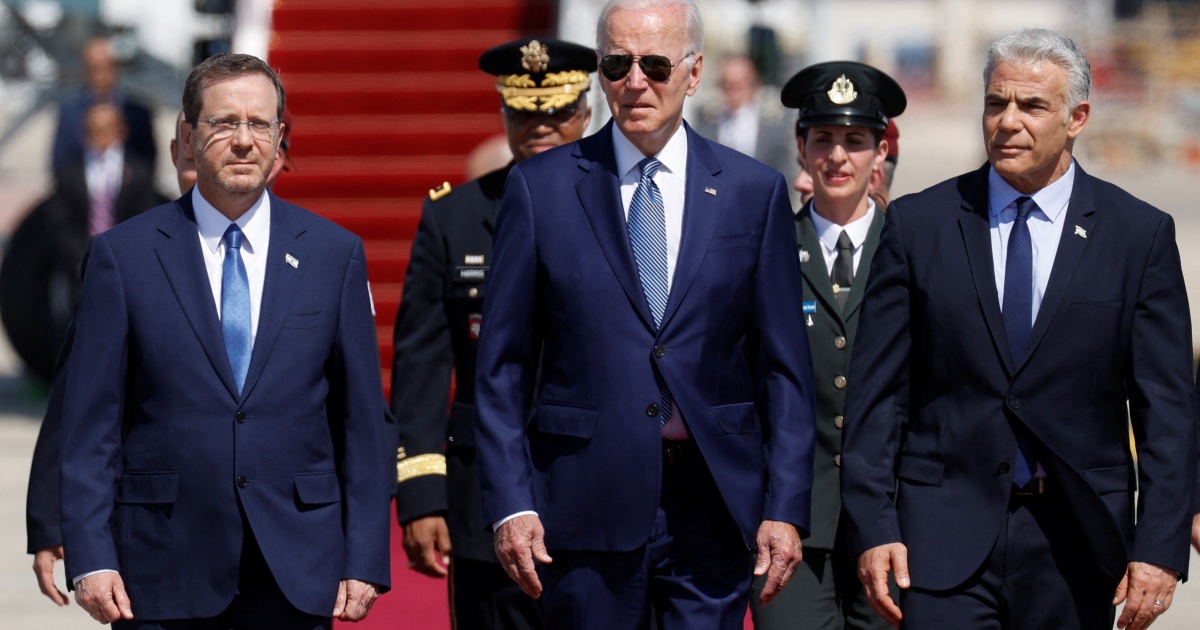 The President will use this week’s Middle East visit to reassure allies that the US won’t deprioritise the region.

United States President Joe Biden’s visit to the Middle East this week is the culmination of an urgent need and a growing desire.

The need is for the US to convince its partners in the region to fully support its position on Russia’s war in Ukraine – and meet the West’s growing energy needs – by addressing their security concerns.

And the desire is for the US to clarify its voice, and explain to its partners exactly how it wants to confront and contain Russia and China’s growing strategic influence in the unstable but important region.

Biden wants to make clear to his interlocutors that they need to stop reminiscing about policies of past administrations, and focus on his approach: one that is realistic and pragmatic; that harmonises ends and means; that considers past failures and present capabilities; that steers away from the lofty agendas of regime change, nation-building, and radical regional transformations.

Biden’s Middle East policy had already been outlined by National Security Advisor Jake Sullivan, who emphasised Washington’s desire to promote “regional stability” through diplomacy, and the top White House official on the Middle East, Brett McGurk, who talked of a desire for “returning to basics” through the “3D approach” of deterrence, diplomacy and de-escalation.

During his time in the Middle East, Biden will further clarify his position and try to reassure allies that with this change in strategy the US is planning neither to leave nor to deprioritise the region. He will explain that the decision to withdraw from Afghanistan would not have any bearing on Washington’s presence in the Middle East, and that if anything it will free more resources for the region, especially to fight “terrorism”.
Biden will also make clear

to his regional partners that Iran is – and will remain for the foreseeable future – a US “adversary”, regardless of what happens with the nuclear deal. He will assure them that Washington will not allow Iran to go nuclear, come what may.

He will explain that strengthening alliances in the Middle East is key for US national security, and that Washington is ready to sell weapons and provide training and support to key regional allies to stand up to Iran and its regional proxies. But at the same time, he will make sure that everyone understands he has no intention to tolerate “free riders” – except Israel – and would insist his partners at least keep the appearance of respect for human rights, which his administration puts at the centre of its foreign policy.

In case a regional cold war continues to gather steam, with Russia and China standing behind Iran and conducting military exercises with its military, as has been the case over the past few years, Biden wants to make sure the US is not left out with no leverage or influence over the situation. Thus he wants to continue the pursuit of diplomacy with Iran and to support regional partners, such as Saudi Arabia, who are doing the same.

He also would like to see expansion and strengthening of the Abraham Accords and deepening of Israeli influence over the Arab world. Thus he will likely use the upcoming visit as an opportunity to demonstrate his administration’s readiness to promote such cross-regional cooperation through security and technology investments.

Although there’s a lot of talk about the formation of a Middle East NATO, Biden has no such strategic vision or doctrine for the region and will not pretend to have one. He is more likely to listen to suggestions than announce a grand initiative during his time in the region. But this does not mean he would not encourage such discussions, as the appearance of such a drive may serve US interests by maintaining a momentum towards collective security. The dream of a Middle East NATO, as unrealistic as it may be at the moment, is also a good vehicle for the US to sell more expensive arms under stricter conditions.

Biden hopes to achieve all of the above patiently and without much fanfare. He would like to de-escalate tensions from Yemen to Palestine, from Libya to Syria and the Gulf. His goal is not to swiftly deliver big solutions to big problems, but rather manage regional crises without direct military interventions. He, however, still appears determined to maintain a strong anti-terrorism task force in the region to fight ISIS, al-Qaeda and other organisations the US considers “terrorist”.

While Biden remains committed to a two-state solution in Israel-Palestine in theory, he seems convinced that such an outcome is not attainable without directly confronting decision-makers in Israel or the powerful Israeli lobby in Washington. He likely does not see such an attempt politically beneficial at this moment. Hence, this week he will portray Palestine as a “humanitarian issue” that can be resolved through aid and investment aimed at improving living standards and governance.

In short, though Biden is pursuing a more pragmatic, less ambitious Middle East strategy than his three predecessors, he is picking up important elements from all of them, notably combating terrorism, pursuing diplomatic solutions – including a nuclear deal with Iran – and prioritising the Abraham Accords at the expense of Palestinian and Arab political and human rights.

All of which begs a number of questions:

How, in light of disastrous past failures, will a return to the basics and traditional alliances with autocracies lead to a different outcome?

How will Biden respond to the security deterioration in the region caused by the escalation between Iran and Israel in Syria and elsewhere, knowing all too well that neither party has any intention to back off and give up on their regional ambitions?

Will the US’s regional allies, such as Saudi Arabia, UAE and Egypt, agree to a return to the status quo and once again start taking dictates from Washington, or will they become more like Israel – difficult, eccentric and pursuing their own interests?

What will the implications of the US expanding its support for Israel while paying lip service to resolving the Palestinian issue be for the region?