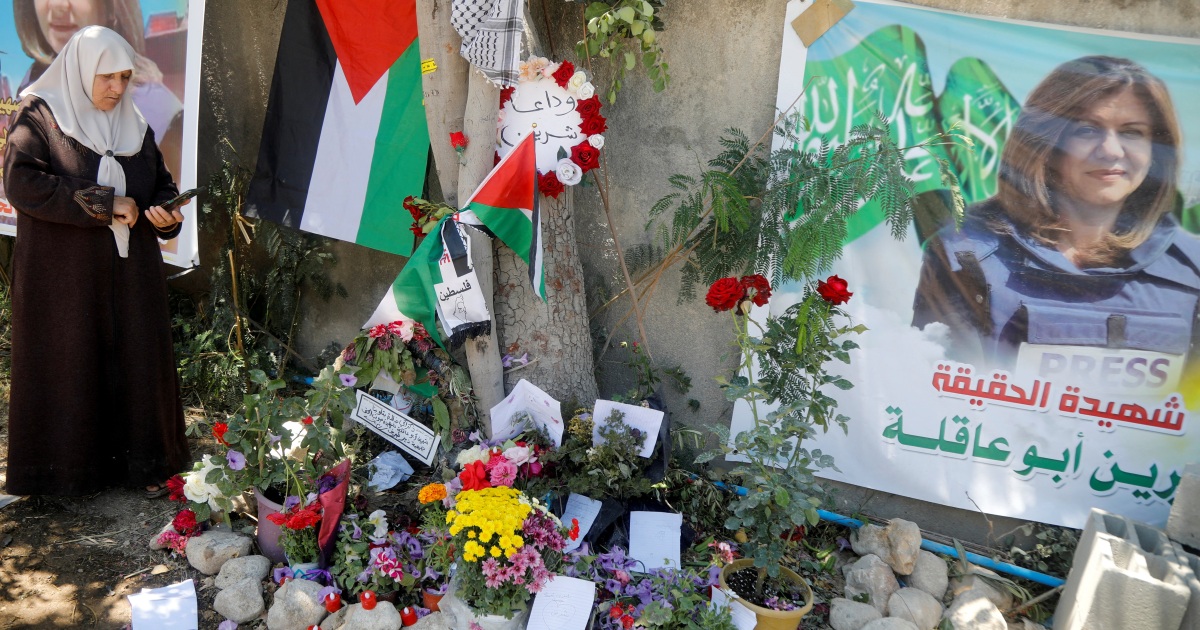 But the US Department of State says the investigation is inconclusive on the origin of the bullet that killed the Al Jazeera journalist.

The US Department of State has said that independent investigators could “not reach a definitive conclusion” regarding the origin of the bullet that killed Al Jazeera journalist Shireen Abu Akleh, but said Israeli military gunfire was “likely responsible” for her death.

“Ballistic experts determined the bullet was badly damaged, which prevented a clear conclusion,” the United States government said in a statement on Monday.

The US Security Coordinator, by summarising investigations by both Israel and the Palestinian Authority, also said on Monday that the detailed forensic analysis showed no reason to believe that the shooting was intentional.

Abu Akleh was shot in the head on May 11 while covering an Israeli army raid on the Jenin refugee camp in the occupied West Bank, despite wearing a flak jacket and helmet clearly marked “PRESS”.

Palestinian officials, international rights groups and media outlets carried out independent investigations that concluded that Abu Akleh was killed by the Israeli military.

“What we do know is that the units that Israel sends to Jenin, the occupied city and refugee camp in the northern West Bank, are not infantry or marines; it sends special forces,” said Marwan Bishara, Al Jazeera’s senior political analyst.

Abu Akleh’s family said in a statement it was “incredulous” that the examination could not determine whose gun fired the bullet that killed her.

“We will continue to advocate for justice for Shireen, and to hold the Israeli military and government accountable, no matter the attempts to obfuscate the reality of what happened on May 11,” it said.

A senior Palestinian official accused the US of protecting Israel after the forensic examination failed to reach a firm conclusion on the origin of the bullet.

“The truth is clear but the US administration continues to stall in announcing it,” Wasel Abu Youssef, a member of the Executive Committee of the Palestine Liberation Organization (PLO), told Reuters news agency. “We say Israel killed Shireen Abu Akleh and it has to be held responsible for the crime it has committed.”

Al Jazeera’s Mike Hanna, reporting from Washington, DC, said that the US State Department’s statement on the shooting likely being unintentional “is a key issue” that will be widely questioned.

“There is no clear [finding] as to exactly what happened, and there is going to be pressure from the public, [and] from Congress, to actually push this further. To try and find some way in which a more definitive answer can be found,” he said.

“There is no clear definition of exactly what happened, why it happened, [or] who did it.”

On Saturday, Akram al-Khatib, general prosecutor for the Palestinian Authority, said that officials had “agreed to transfer the bullet to the Americans for examination”.

However, conflicting reports over who would conduct the tests on the bullet emerged on Sunday, with an Israeli military spokesman telling Army Radio: “The test will not be American. The test will be an Israeli test, with an American presence throughout.”

Al Jazeera’s Stefanie Dekker, reporting from West Jerusalem, said Palestinians have repeatedly said they did not want the bullet to be handed over to the Israelis because they did not believe they would conduct an unbiased and transparent investigation.

“The Palestinians didn’t expect anything conclusive, certainly not accountability or justice when they heard that the bullet had been handed over to the Israelis to investigate, even if the Americans were present,” she said.

The State Department’s statement came just weeks before an expected visit by US President Joe Biden to Israel and the West Bank.

“The US is trying to give the Palestinians something, to give the Israelis something in order to put the issue behind it before Biden visits the [region],” Bishara said.

“This is sad because what everyone was expecting was the US administration to have the moral courage at this point in time to come out clean and to actually say clearly that the Israeli occupation is responsible for the killing of a journalist, our colleague Shireen Abu Akleh.”

“They just want to muddy the water.”