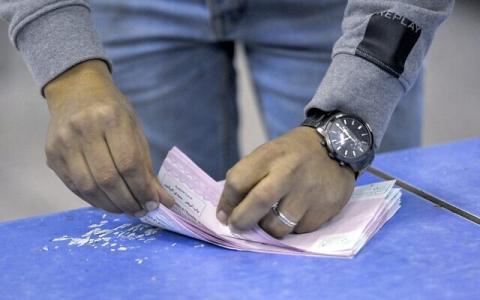 Tunisians on Saturday overwhelmingly boycotted an election for a new parliament, and electoral board president Farouk Bouasker said that by close of polls at 6:00 pm (1700 GMT), just 8.8 percent of the nine-million-strong electorate had cast votes.
That would be the lowest participation in any poll since the revolution, AFP reported.

Opposition groups boycotted the election, saying it was part of a "coup" against the only democracy to have emerged from the 2011 uprisings across the region.

Bouasker acknowledged turnout was "modest" but said it could be explained by "the absence of foreign financing, in contrast to previous elections".

"This was the cleanest election, with no vote-buying," he said.

The National Salvation Front, the main opposition alliance which includes Ennahdha, described the low turnout as "seismic" and called on the president to bring all political forces together for consultations.

The ballot followed three weeks of barely noticeable campaigning, with few posters in the streets and no serious debate among a public preoccupied with day-to-day economic survival.

It comes almost a year and a half after President Kais Saied deployed military vehicles to suspend parliament, following months of political deadlock and economic crisis exacerbated by the coronavirus pandemic.

His power grab sparked fears for the democracy ushered in after the ouster of Zine El Abidine Ben Ali.

Tunisia expert Youssef Cherif said that even though turnout was just nine percent, the parliament being elected "is supposedly more democratic and representative than all previous parliaments in the country's history".

On Saturday, he told voters that Tunisia was "breaking with those who destroyed the country".

"Those who are elected today should remember that they are being watched by their voters, and that if they're not up to the job their mandate will be taken away," he said at a polling station in a comfortable district of Tunis.

Saied's moves against an unpopular political system were initially supported by Tunisians tired of the messy and sometimes corrupt democratic system installed after the revolution.

But almost a year and half on, the country's economic woes have gone from bad to worse.

Inflation is around 10 percent, and frequent shortages of milk, sugar and petrol are fueling a growing wave of emigration.

The previous legislature had far-reaching powers in the mixed presidential-parliamentary system enshrined in Tunisia's post-revolution constitution.

But the new chamber "won't be able to appoint a government or censure it, except under draconian conditions that are almost impossible to meet," said political scientist Hamadi Redissi.

Almost all of Tunisia's political parties, including Ennahdha, boycotted the vote.
#Coronavirus