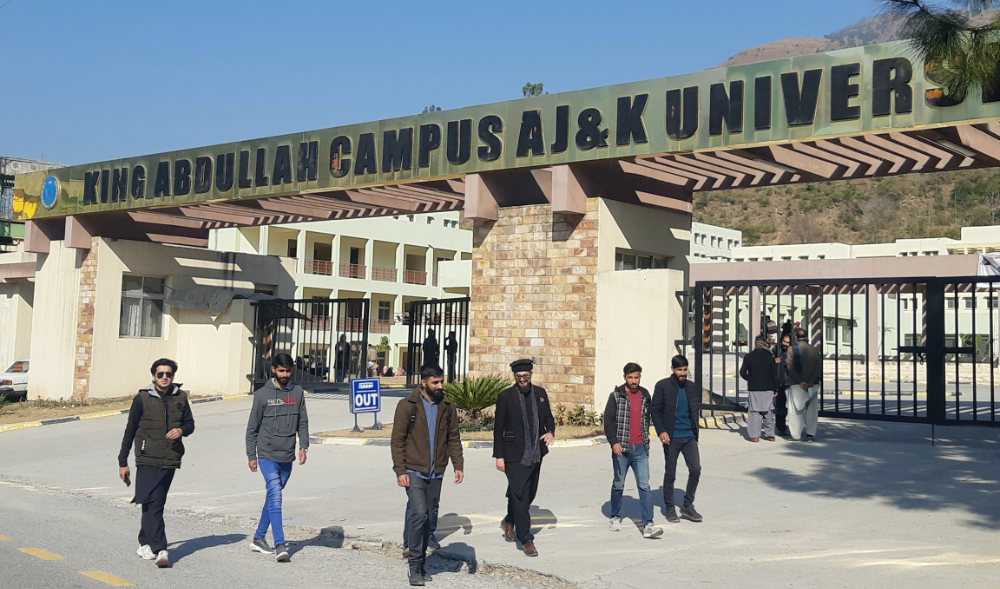 A Saudi-funded campus of the biggest university in Pakistan-administered Kashmir is fostering science education in the region and encouraging female enrollment into the male-dominated field, as nearly half of its students are women — higher than the global average.
The multimillion-dollar King Abdullah Campus in Chhatar Kalas, 22 km from the regional capital Muzaffarabad, was financed by Saudi Arabia, which has funded several development projects in the region, helping it return to normalcy after a devastating earthquake in 2005 destroyed most of its infrastructure, including the University of Azad Jammu and Kashmir.

Built on nearly 100 hectares, the campus was completed in late 2019 and started classes in September 2020.

The campus now hosts most of the university’s 9,000 students and is home to its science departments, including physics, computer science, mathematics, chemistry, and geology, which see a high rate of female enrollment.

Globally, only 35 percent of STEM students in higher education are women, according to UNESCO data. At King Abdullah Campus, however, women constitute 47 percent of all students.

“Out of a total 5,440 students enrolled at King Abdullah Campus, there are 2,877 males and 2,563 females. That speaks volumes about girls’ participation,” Khan said. “We would like to see that ratio further increase.”

After the earthquake destruction, many students at the University of Azad Jammu and Kashmir had to travel far to other campuses — some even to Islamabad — to attend courses.

With social norms and safety concerns limiting women’s mobility across Pakistan, traveling alone tens of kilometers from home was nearly impossible for them.

“The establishment of King Abdullah Campus at Chhattar Kalas has given me, and many other girls, an advantage,” 19-year-old mathematics student Samar Qayum told Arab News, explaining that traveling long distances was a major burden for them.

“The number of female students would have gone down in this region,” she said, “but this facility has made life easier for girls.”

Boys, too, are happy.

Physics student Waqar Younis said the establishment of the campus allowed him to save on transportation and accommodation, as those were major costs for the students.

“The establishment of King Abdullah Campus has greatly benefited me,” he said.

In the near future, the campus is likely to become even more attractive as $8.5 million computer science labs should be ready this year.

The nine labs will be equipped with 600 computers, allowing for the study of artificial intelligence and machine learning.

“We are hopeful that by this year in August we may get the equipment,” Dr. Rabia Riaz, head of the Department of Computer Science and Information Technology, told Arab News.

“This sort of equipment and building structure is not only unavailable in Azad Kashmir but also in all of Pakistan.”