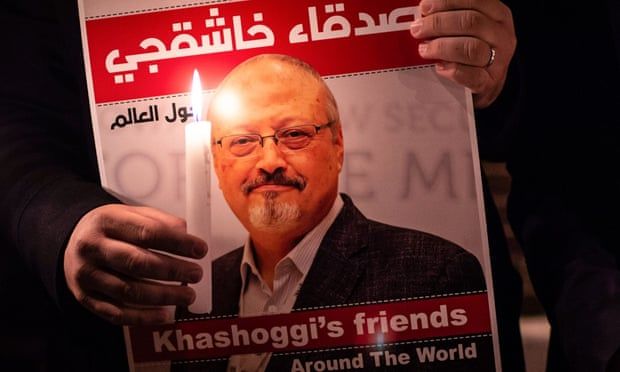 Three years after the assassination of Jamal Khashoggi, the Saudi royal court adviser accused of directing the murder is being quietly reintroduced by pro-government influencers as a patriotic figure who has served his country well.

Social media accounts that back the Saudi leadership have in recent months been posting tributes to Saud al-Qahtani, a chief aide to crown prince and Saudi Arabia’s effective leader, Mohammed bin Salman, in a move that is seen as marking his gradual return to the seat of Saudi power. Qahtani vanished from public view in the aftermath of the gruesome killing in Istanbul that shocked the world and almost derailed his boss’s path to the throne.

The close friend of bin Salman has also been seen in the royal court, from where he is accused of planning one of modern history’s most brutal assassinations inside the Saudi consulate in Istanbul, which was caught in graphic detail on listening devices planted by Turkish spies. “He looks very nervous, almost paranoid,” said one official who has seen Qahtani. “He is still trying to keep a low profile.”

Accounts of Qahtani’s re-emergence come as Saudi Arabia’s sovereign wealth fund takes formal control of Newcastle United football club after finalising a contentious takeover deal that has been staunchly opposed by human rights groups. The £300m deal is the country’s first major acquisition of a foreign team and biggest foray yet into global sports.

Qahtani’s whereabouts had been the subject of intense speculation since he disappeared from view in late 2018. The CIA and MI6 both believe he had been the central figure in the plot which saw Khashoggi, a former royal court insider turned critic, butchered inside the consulate by a team of government hitmen that he is accused of assembling.

His reported sighting and increasing mentions on social media accounts that support bin Salman appear to be signs that officials feel safe enough to risk reintegrating him to the heart of government – a move that is almost certain to be opposed by the US, which took a renewed interest in Khashoggi’s death after Joe Biden was inaugurated as president.

A spate of postings supporting Qahtani on social media started to appear in May this year from accounts that support the Saudi government. The posts became more frequent in July and August and have continued since. All offer praise for Qahtani as a “hero”, “patriot” or “leader”. Many posts have included photo tributes, while others have showcased videos featuring him with Prince Mohammed.

The posts have many hallmarks of a concerted campaign, which for such a figure in Saudi Arabia’s tightly controlled media environment would not be possible without the sanction of senior leaders.

“There is no question that Qahtani is back,” said a senior Gulf official. “The question is, did he ever really leave?”

While it remains unclear whether the Saudi leadership plans to publicly reinstall Qahtani as an aide, his re-emergence is bound to raise questions from the Biden administration, which has sidelined bin Salman and accused him of sheltering the main assassins of Khashoggi, including Qahtani, whom US officials have labelled a ringleader.

In 2019 a Saudi court cleared Qahtani of any charges in connection with the assassination. Five other members of the hit squad were given death sentences and four more sentenced to prison terms of 24 years. However, officials in the US, UK and Europe have since described the sentences as a mockery. The president of Amnesty International, Agnès Callamard, called the sentences the “antithesis of justice”.

Saud al-Qahtani had been a pivotal figure in bin Salman’s rapid rise and had helped cement his authority at every step. He had assembled the kingdom’s cybersecurity and hacking capabilities and was allegedly physically present during at least one rendition of a Saudi citizen from Europe.

He is also alleged to have been central in each of the episodes that won the new leadership infamy, including the round-up and detention of leading business figures, the hacking of Amazon boss Jeff Bezos’s mobile phone and a directive to hack two Guardian reporters in 2019. He is also accused of interrogating and menacing the Saudi activist Loujain al-Hathloul in 2018.