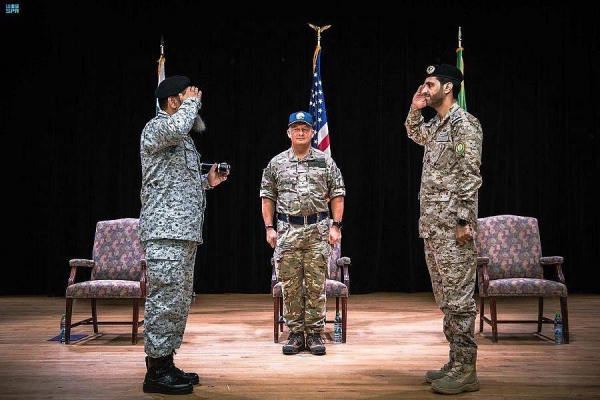 The Royal Saudi Naval Forces (RSNF) have taken over the command of the Combined Task Force 150 (CTF-150) for the 3rd time at a special ceremony held at the headquarters of the US Naval Base in Bahrain.
During the celebration, the RSNF Commodore Abdullah Al-Mutairi has officially taken over command of Combined Task Force 150 (CTF-150) from Pakistan Navy Rear Admiral Zulfiqar Mohammad.

The CTF-150 was established in 2002 as one of four Task Forces. In addition, the formation of the Task Force 153 (CTF-153) was announced in the final statement of Jeddah Security and Development Summit, in the presence of US President Joe Biden, GCC leaders, Egypt, Jordan and Iraq.

These four forces operate under the command of the Combined Maritime Forces (CMF) in the US Fifth Fleet in Bahrain, and it is the largest international maritime partnership in the world. Its tasks are to implement maritime security operations in large areas of operations estimated at about 200 million square meters covering the Gulf of Oman, the Arabian Sea, the Indian Ocean, the Gulf of Aden and the Red Sea. The purposes of the force include combating terrorism and the activities supporting it, such as human smuggling, drugs and weapons trafficking, and helping to ensure freedom of international navigation and the flow of international trade safely and securely in those areas that are the main artery of the global trade and economy.

The RSNF Command received these tasks for the first time from the British Royal Navy on July 30, 2018, and during that period it carried out a number of operations. It received the command for a second time from its French counterpart in August 2020.

The Combined Maritime Forces comprise 34 countries and are headquartered in Bahrain with the Central Command of the US Naval Forces and the US Fifth Fleet.
#Joe Biden