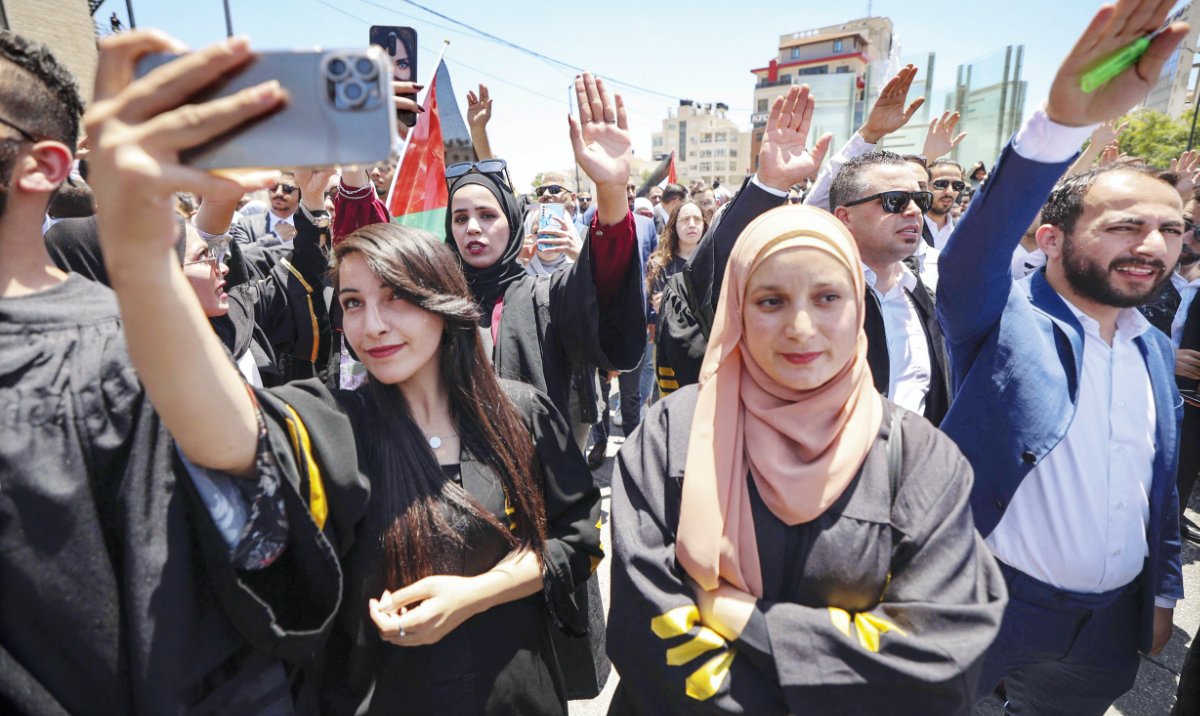 Palestinian lawyers are standing firm against legislation delivered by presidential decree that “curbs rights and freedoms.”
The lawyers’ dispute with the Palestinian Authority has deepened a month after the launch of protests over the approval of dozens of “decisions by law” issued by President Mahmoud Abbas.

These are considered illegal and reportedly strengthen the control of the president’s office, while disregarding citizens’ rights.

The Palestinian Bar Association has stepped up protests, including strikes, demonstrations and sit-ins, that have paralyzed the court system.

The Palestinian government is yet to respond to the lawyers’ demands.

Senior sources at the bar association told Arab News that it will escalate the protests.

The lawyers’ central demand is the cancelation of 400 decisions they say have been taken illegally by the 87-year-old Abbas in the absence of a Palestinian parliament.

The uproar has drawn the attention of international organizations and donor countries to the Palestinian Authority.

Several have expressed their disappointment at the executive authority’s failure to respond to the lawyers’ demands not to disrupt the judiciary.

Majed Al-Arouri, director of the Civil Commission for the Independence of Judiciary and Rule of Law, told Arab News that there has been widespread resistance to the decisions by law in recent months, especially judicial laws, which threaten human rights and guarantees of fair trial.

The bar association’s demands are modest, he said, adding: “It does not need more than five minutes for the presidency to take a decision on it and open a dialogue.”

Al-Arouri said that the PA’s intransigence has forced the bar association to take to the streets and adopt new methods of demonstrating, including marching on the headquarters of the president and government.

Meanwhile, a senior PA official told Arab News that Prime Minister Mohammed Shtayyeh and PA Minister of Justice Mohammed Al-Shalaldeh had not been informed of the contentious law decisions, which were drafted by Supreme Judicial Council President Issa Abu Sharar.

Ali Muhanna, presidential adviser for legal affairs, presented the decisions to Abbas, who issued them as “decrees,” the official claimed.

Lawyers are right to protest against the decisions, which affect the prestige and integrity of the judiciary, the senior PA official said.

Suhail Ashour, head of the Palestinian Bar Association, confirmed to Arab News that the issue is not related to the Palestinian presidency, but to the Supreme Judicial Council and the president’s adviser, who drafted the decisions.

Up to 400 decrees have been issued by Abbas’ office and taken effect, an approach used by the Palestinian leader in the absence of a parliament that introduces or monitors legislation.

“It has been nearly a month since the start of our protests as lawyers, but our demands to the president of the Supreme Judicial Council and the president’s legal adviser, who passed these laws, were ignored. We are continuing our protest activities,” said Ashour.

He told Arab News that the bar association will meet on Sunday to discuss transferring lawyers from the register since they are longer able to carry out their mandated mission.

The West Bank has about 7,000 practicing lawyers in addition to 3,000 trainees and 500 retired lawyers.

All are members of the bar association, which is one of the most influential unions in the Palestinian territories.

Palestinian legal experts say that the issue has added to the growing public awareness that citizens’ rights are being ignored following the decision to cancel legislative elections in 2021.

“There is no specific mechanism for issuing decisions by law,” Al-Arouri added.

“Some are published individually based on the degree of this or that person’s proximity to the president. The government provides some, and only a few are the subject of consultation. The citizen has nothing to do with these decisions,” he said.

“The way out of all these crises is to respond to the public’s demands to hold presidential and legislative elections.”