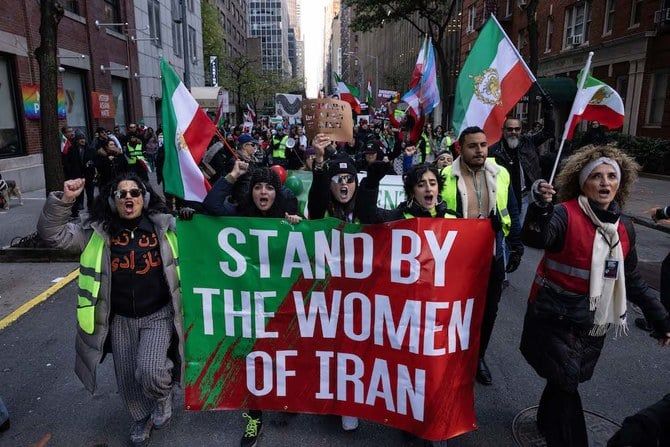 Look Ahead 2023: Why the Iranian regime’s future hangs in the balance

“Margh bar diktator” — or “death to the dictator” — has become the rallying cry of a massive wave of protests that have consumed nearly the entire Islamic Republic of Iran.

Though the news media remains under the tight control of the state’s internal security apparatus, grainy cell phone video of protests from schools, strikes at energy facilities, and rallies along main roads from Tehran to Ahvaz are shaking the rule of Iran’s supreme leader, Ayatollah Ali Khamenei, as never before.

The last big challenge to the status quo in Tehran came in 2009 during the Green Revolution, which captured the world’s imagination at a time when social media offered real-time access and a badly needed voice for dissatisfied Iranian youth calling for reform.

Tehran’s response to the 2009 protests, during the presidency of Mahmoud Ahmedinejad, was brutal and swift.

But while the world was captivated by what seemed to be a breaking point for the “Islamic Revolution,” the cries for reform were met with exceptional brutality and mass killings carried out by the Basij, the plainclothes paramilitary arm of the government, and special units of the Revolutionary Guards (IRGC) known as Pasadran.

Protesters inside Iran are as determined as ever. According to 32-year-old Atefeh, a member of the Resistance Units of the People’s Mojahedin from the Iranian city of Rasht, “the poverty, destruction, and embezzlement of the regime against (Iran’s) people” are driving forces that have “fueled the speed and progress of the uprisings and protests ... Iran has completely changed in these three months.”

This time around, observers and experts believe that Khamenei’s forces may not be able to use the same playbook to quell what is becoming a sustained nationwide uprising. Saeed Ghasseminejad, an Iran analyst for the US-based Foundation for the Defense of Democracies, told Arab News that he thinks Khamenei’s regime is living on borrowed time. 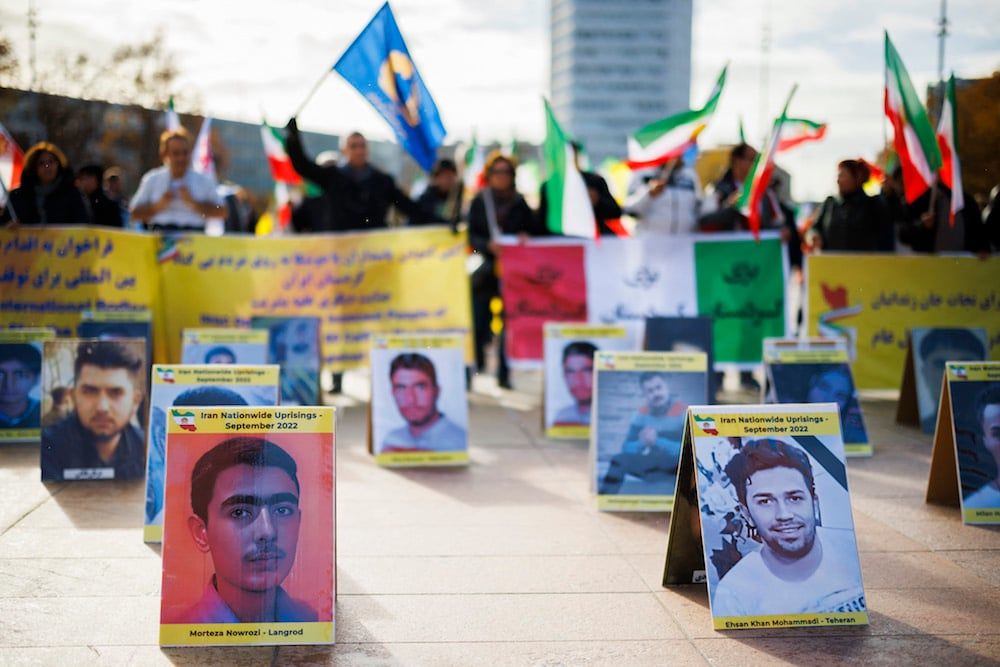 Placards showing victims of the regime’s repression (below) were displayed near the French National Assembly in Paris this month.
“There is a sea of blood between the regime and majority of Iranians. After three decades of failed experience with the reform project, Iranians don’t buy the myth of reform anymore, be it political, economic or social. And the regime has put itself in a position that making concessions to the protesters will most likely only expedite its fall,” he said.

Physical and sexual violence, and the executions and sweeping arrests of those calling for change in Iran in previous years have coincided with promises that improvements in the economic and social environment were just around the corner. However, this tactic may have also run its course, and the prospects for compromise have diminished.

Ghasseminejad said: “The use of brute force has become the regime’s only option. So far it has not worked, and even if it temporarily works, as we have seen over the last five years, every round of protests is followed by an even bigger one.”

It is an outcome that no longer seems too far-fetched. While the IRGC may hold a monopoly on the violence that it wields in an attempt to quell popular unrest, other factors are coming into play that could catalyze the Iranian regime’s downfall.

Saeed predicts that “various factors will decide the fate of the Islamic Republic in 2023.”

“For example, the death of the supreme leader or a military attack against the nuclear facilities are two events which can happen over the next year and will have significant consequences for the revolution in Iran,” he told Arab News. 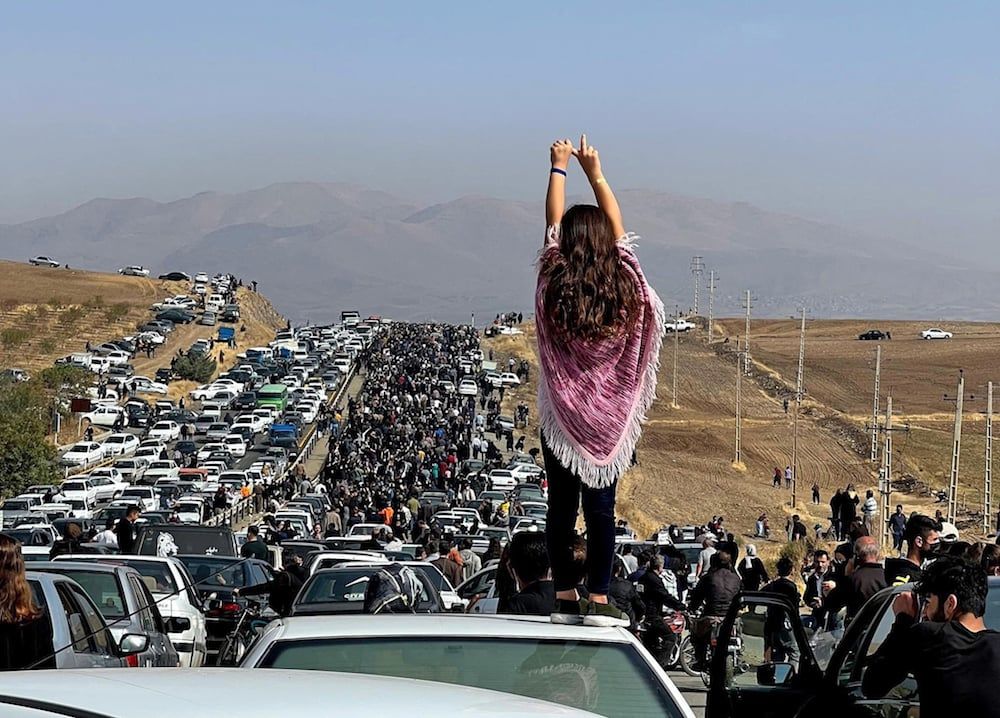 A photo posted on Twitter in October (above) showed thousands heading to Aichi cemetery to mark 40 days since the death of Mahsa Amini.

A sudden shock to the system could happen. Khamenei can no longer lean on the former head of the Revolutionary Guards elite Quds Force, Qassem Soleimani, who was killed in a US drone strike in Baghdad in 2020.

With Soleimani’s death, Khamenei is unable to use him as a master strategist exporting Iran’s ideological influence in the region. Soleimani also played a lesser — but equally notable — role in organizing the Revolutionary Guards’ crackdown on protesters in the past.

While Tehran has been able to weather these storms by a mixture of bloodshed and political agility at home, the dire economic situation facing Iranians from all walks of life, and across the ideological spectrum, is perhaps the main existential threat facing the ruling elite.

A recent report from the Washington D.C.-based Institute for the Study of War said: “The Iranian economy appears to be entering a period of potentially significant disruption. Protester coordinators and other social media users have called on Iranians to urgently withdraw their bank account savings and buy gold in recent days.”

Fred Kagan, director of the Critical Threats Project at the American Enterprise Institute, says the steep decline of Iran’s currency is driving unprecedented inflation and putting serious stress on the banking system.

Macroeconomic trends coupled with the protests are forcing Khamenei and the IRGC, who have taken over large parts of key sectors of the economy, to rethink how they have traditionally handled business.

“We think it’s too soon to tell where this is headed or how bad it will be, but if serious economic instability were added to the crimes the regime is already committing against its people and the brutality and simple viciousness with which it is oppressing them, that could add energy to a protest movement,” Kagan told Arab News. 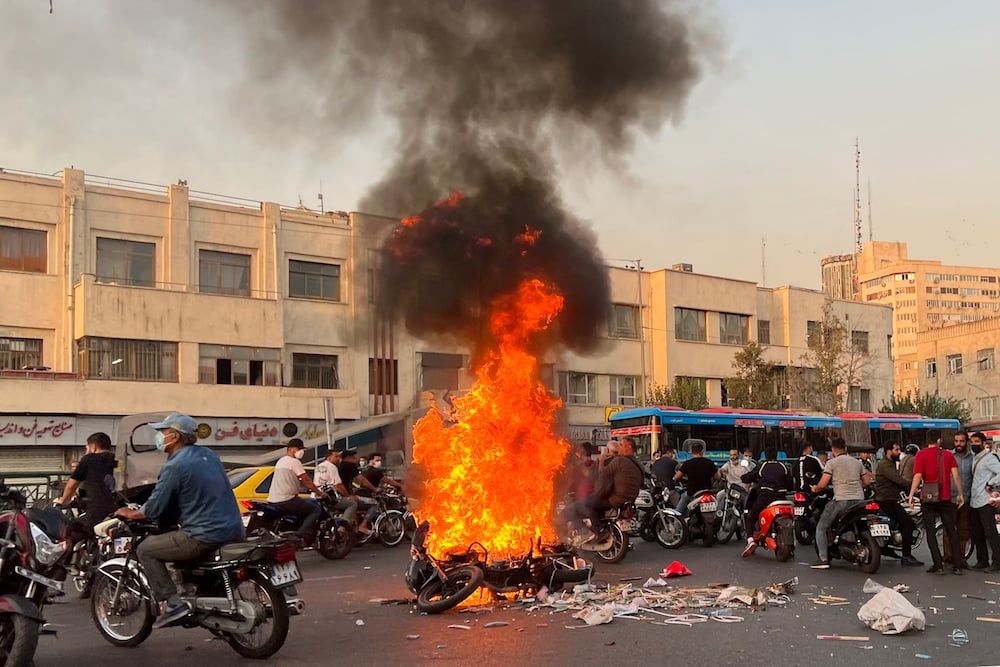 Ongoing protests in Tehran (below) and across Iran are putting Supreme Leader Ali Khamenei and his regime under pressure like never before.

He thinks the current protests are better organized with longer staying power than before. The regime is particularly conscious of the importance of maintaining the solvency of a banking sector that is heavily connected to the IRGC and charitable trusts called “bonyads,” which have enriched key ruling elite families that Khamenei relies upon.

According to Kagan, Tehran “could face the prospect of having to use its own hard currency reserves to bail out banks ... The protesters have already been experimenting with using coordinated strikes and boycotts to cause limited economic disruptions.”

The reaction of the regime to the protests may also eventually extend to freezing bank accounts and withdrawals, as part of a more targeted approach. However, Kagan claims that such efforts “could potentially start to cascade in ways that would be very problematic for the regime.”

The economic engine keeping the regime afloat is heavily intertwined with Iran’s wider geopolitical aspirations: Selling and exporting its Shahed drones to aid the Russian war machine in Ukraine has brought it badly needed cash. Its energy exports continue to bring in sufficient hard currency to enable the regime’s survival amid exceptional domestic turbulence, according to Ghasseminejad.

“Tehran is still exporting more than 1.1 million barrels per day of oil and its non-oil exports remain strong. Imposing symbolic and targeted sanctions on human rights violators is a good thing, but denying the regime the revenue to fund its oppression machine should be one of the key priorities,” Ghasseminejad said.

Khamenei and his successor may be able to weather the storm. Past experience has shown that the international community, Western Europe in particular, has rushed to do business with Tehran after condemning its actions both inside and outside of its borders.

However, with the economy in free fall, and more and more Iranians saying they have little left to lose, 2023 could bring the chance of a transformational change that was so brutally quashed in 2009.