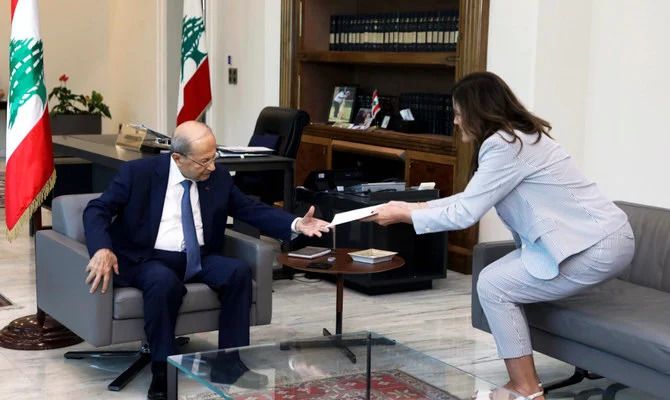 Shea presented a written message from Amos Hochstein, the US mediator in the indirect negotiations between Lebanon and Israel on the demarcation issue.

A technical team is expected to discuss the content of Hochstein’s 10-page proposal before Lebanon submits an official response next week.

A copy of the proposal was also referred to the Lebanese Army Command for review.

Aoun is keen to resolve the demarcation issue before his six-year term concludes at the end of the month. If the US proposal is approved, an agreement might be signed by the middle of the month.

After Aoun’s initial talks with Berri and Mikati, the three men are expected to meet next week to formulate their response.

Hochstein had promised to present a formula that would bring the points of view closer, especially over the land point from which the line originates, as Lebanon insists on amending it due to the violation of its territorial waters before reaching the exclusive economic zone.

Lebanon has so far rejected every Israeli attempt to establish the “line of buoys” that Israel adheres to as if it were the land border line with Lebanon. Lebanon meanwhile believes that it (the disputed block) lies within Lebanese territorial waters and refuses to discuss the matter.

Legal expert Christina Abi Haidar told Arab News: “Giving up the demarcation from the land, specifically from Ras Al-Naqoura, would mean that the adoption of Line 29 to demarcate the border has inevitably fallen, and we will likely have to share the blocks with Israel.”

Iran-backed Hezbollah Secretary-General Hassan Nasrallah had warned against any Israeli exploration and extraction in the disputed blocks before Lebanon gains its full rights in the waters.

Aoun formed a team made up of legal, technical and administrative experts to review the content of Hochstein’s offer. As well as Berri and Mikati, the consultations are also likely to involve the Hezbollah leadership, which is awaiting Lebanon’s official position.

Israel is keen to complete the demarcation of the maritime borders so it can take steps to extract gas from the Karish field, and especially as the negotiations are being exploited in its parliamentary elections.

French company Total is also awaiting the deal so it can launch its program for exploration operations in the Lebanese fields in accordance with the agreements in force with the Ministry of Energy.

Israel’s Channel 12 reported on Saturday that Israeli security staff will ratify the border demarcation agreement with Lebanon next week.

“The Lebanese state is required to inform the public of the Israeli offer,” she said. “They say that the demarcation of the land point from which the sea demarcation line will start is postponed until the land border is demarcated, which means that the dispute has not yet been resolved. It was rather pushed to a later stage.”

Also on Saturday, the French Foreign Ministry stressed the importance of Lebanon electing a new president before Oct. 31.

A ministry spokesman said Lebanese leaders “must be up to the task, which requires unity and taking the necessary measures to end the crisis.”

Burkhard praised the role played by the Lebanese military in maintaining security and stability in the country.

He also reiterated France’s support for the Lebanese army, in terms of providing emergency aid and developing its operational capabilities, and its commitment to participating in the UNIFIL peacekeeping forces.

For his part, Gen. Aoun said the Lebanese army remained cohesive and able to protect the nation and its people.