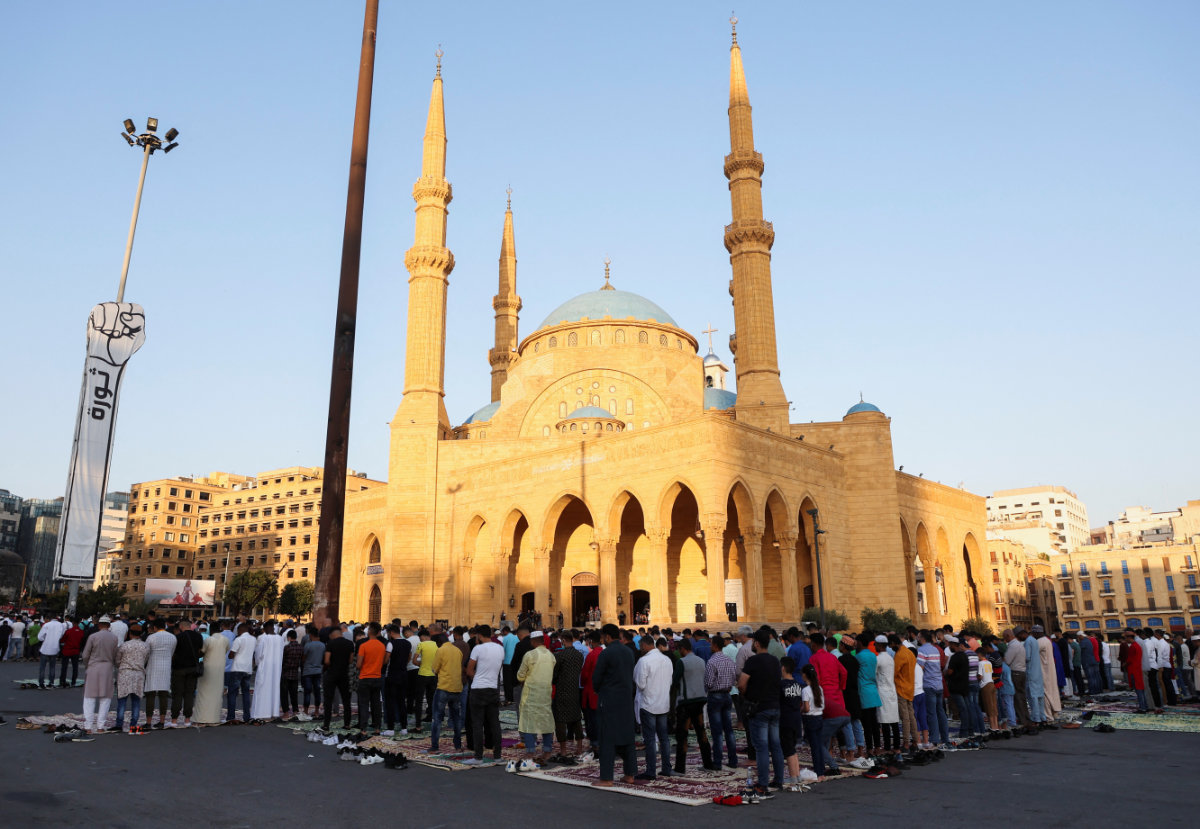 Political officials in Lebanon’s ruling class came under fire on Saturday for suffering from “a moral crisis and the love for power” as the country celebrated Eid Al-Adha.
The officials had apologized for not receiving any well-wishers on the holy occasion “due to the circumstances Lebanon is going through.”

“The dignified, self-respecting people will not break in front of your corruption, thefts, and complex sick selves. You wasted their wealth and resources,” he said before hundreds of worshippers in the Al-Amin Mosque in the center of Beirut. “There’s no electricity, no water, no medicine, and no bread. Everything is obscenely expensive, and life has become arduous and compelling.

“The people will remain, but the black pages of history will curse you generation after generation,” added Al-Kurdi, who led the Eid prayers instead of Grand Mufti Sheikh Abdul Latif Derian.

The grand mufti is in Saudi Arabia to perform the Hajj.

Al-Kurdi said the Lebanese officials suffered from “a moral crisis and the love for power.”

In his sermon, he asked: “Where is the prosecution of the killers of the martyred Prime Minister Rafik Hariri following the ruling of the international tribunal? Where’s the investigation into the Beirut Port blast? Where are the people’s financial rights lost in banks? Where’s the water, the electricity, the medicine, the food, and the fuel? Where’s the feeling of security and tranquility? When the captain of the ship is troubled, all the passengers will feel insecure.”

Lebanon entered the holiday phase on Saturday ending next Tuesday. Political activities to form a new government were halted, and work on controversial matters was suspended.

Prime Minister-designate Najib Mikati has not visited President Michel Aoun during the past couple of weeks to continue consultations over the draft Cabinet lineup and Aoun has yet to respond to Mikati’s proposed draft Cabinet.

Tensions have emerged between the two men over the government formation process.

Aoun congratulated the Lebanese on Eid Al-Adha on his official Twitter account, expressing his hope that “some people would sacrifice their interests and selfishness for the interest of the country.”

Mikati issued a statement wishing the Lebanese a happy holiday, while also mentioning that he had prepared a Cabinet lineup and submitted it to Aoun.

“Together we discussed its content and he made some remarks, hoping we will resume discussions on the bases of cooperation and respect that were present between us during the past period.”

The grand mufti sent a message from Makkah to the Lebanese, saying that solutions to problems “solely consist of speeding up the government formation process and committing to the constitution to face dangerous internal and external challenges witnessed by Lebanon.”

“Those who set obstacles, barriers, and contradicting conditions impeding the government’s formation are responsible for the country’s deterioration and collapse,” he added. “Some Lebanese officials are in a coma, perhaps suffer from deficiencies, and do not carry out their national responsibilities to protect the state and its institutions.”

Activity was muted on the first day of Eid, especially in butcheries because of soaring livestock prices.

The price of one sacrificial offering is up to LBP6 million ($204 according to the black market rate). One butcher said this sum was equivalent to “a two-month salary of a first-class employee.”

The bread crisis has yet to be solved, with bakeries witnessing long lines of people waiting to get one bundle that is now subject to rationing, similar to electricity, water, and medicine.

He said: “We imported 45,000 tons of wheat, knowing that what we need for the pita bread amounts to 36,000 tons, meaning that there was an excess of 10,000 tons. But these mafias stole that quantity, and I have reports from the security authorities that include the names of smugglers, traders, bakeries, and mills. It appeared, however, that those arrested have signed a pledge vowing not to repeat their actions and they were discharged. What is this logic? The smuggling of bread to Syria reached about 40 percent. The smuggling is costing the Lebanese wheat subsidies billions of dollars.”

He told the press conference about the “professionalism in smuggling and the advanced ways adopted.”

The minister said Lebanon would seek aid from the World Bank to secure an additional safety net.

“We asked the World Bank for a loan, not to keep the subsidies going, but to secure the arrival of wheat to the country and to rationalize subsidies so that segments of society are not affected by higher prices because, as a government, we cannot keep securing subsidies.”