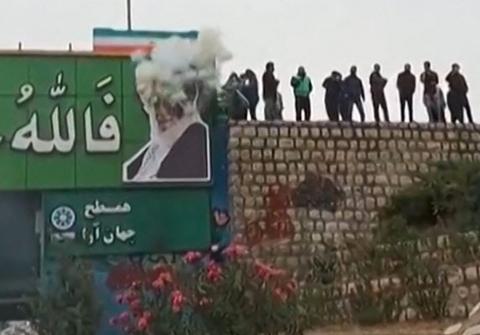 Iran held state-sponsored annual rallies on Friday marking the 1979 seizure of the US embassy in Tehran, as the clerical establishment that has ruled since then struggles to suppress nationwide protests calling for its downfall.
Radical students cemented Iran's revolution by storming the embassy soon after the fall of the US-backed Shah, and 52 Americans were held hostage there for 444 days.

The two countries have been enemies ever since and, as Iranian authorities on Friday urged security forces to swiftly stamp out the anti-government protests, which have spread to all layers of society, new bilateral tensions surfaced.

Iran's president and foreign minister criticized Joe Biden, a day after the US president vowed to "free Iran".

Images broadcast on state television showed anti-American demonstrations attended by tens of thousands of people across the country on the "National Day of Fighting Global Arrogance", while songs called for "Death to America" and schoolchildren carried banners in support of the embassy seizure.

Friday's pro-establishment demonstrations offered a stark contrast to the wave of protests sweeping the country since a 22-year-old Kurdish woman, Mahsa Amini, died in police custody on Sept. 16 after being arrested for being inappropriately dressed.

While past demonstrations have focused on issues such as election results and economic hardships, the current protesters, who include minority Sunnis and Kurds, are determined to secure a new political order.

On Friday, the widely followed 1500 Tasvir activist Twitter account reported protests in the cities of Zahedan, Khash and Saravan in Sistan-Baluchistan, a province where most of Iran's Sunni Baluch minority live.

The impoverished area is close to the border with Pakistan and Afghanistan that has been a hotbed of unrest.

The semi-official news agency Tasnim said an unspecified number of people were injured in clashes in which protesters attacked a government building in Khash and torched several vehicles and security forces opened fire.

Tasnim carried a video purporting to show a burned bank and damaged storefronts in Khash after the unrest, with dark smoke billowing from a building.

A 1500 Tasvir video that Reuters could not verify showed protesters there throwing stones at security forces while gunshots were heard.


The protests present one of the biggest challenges to the authority of the leadership enshrined by the revolution, with many young Iranians overcoming the fear that has stifled dissent ever since.

Iran, trying to strike a nuclear deal with world powers and get relief from sanctions that have increased hardships for many Iranians, has blamed the United States and other foreign enemies for the unrest, saying they want to destabilize the country.

Biden said on Thursday the demonstrators would soon succeed in freeing themselves.

President Ebrahim Raisi described the protesters as "deceived traitors", adding: "I am telling Biden that Iran was freed 43 years ago."

Foreign Minister Hossein Amirabdollahian accused Biden of hypocrisy. "The White House has increasingly promoted violence and terror in the recent riots in Iran, while at the same time it is trying to reach a nuclear agreement," he said in a tweet.

Women, who have been burning their veils, and university students are playing a prominent role in the demonstrations, which call for the death of Supreme Leader Ali Khamenei, but they have attracted support from a broad cross-section of society.

The activist HRANA news agency said on Friday that 300 protesters had been killed in the unrest as of Thursday including 47 minors, as well as 37 members of the security forces.

More than 14,000 people have been arrested in demonstrations in 134 cities and towns, and at 132 universities, it said.
#Afghanistan  #Joe Biden