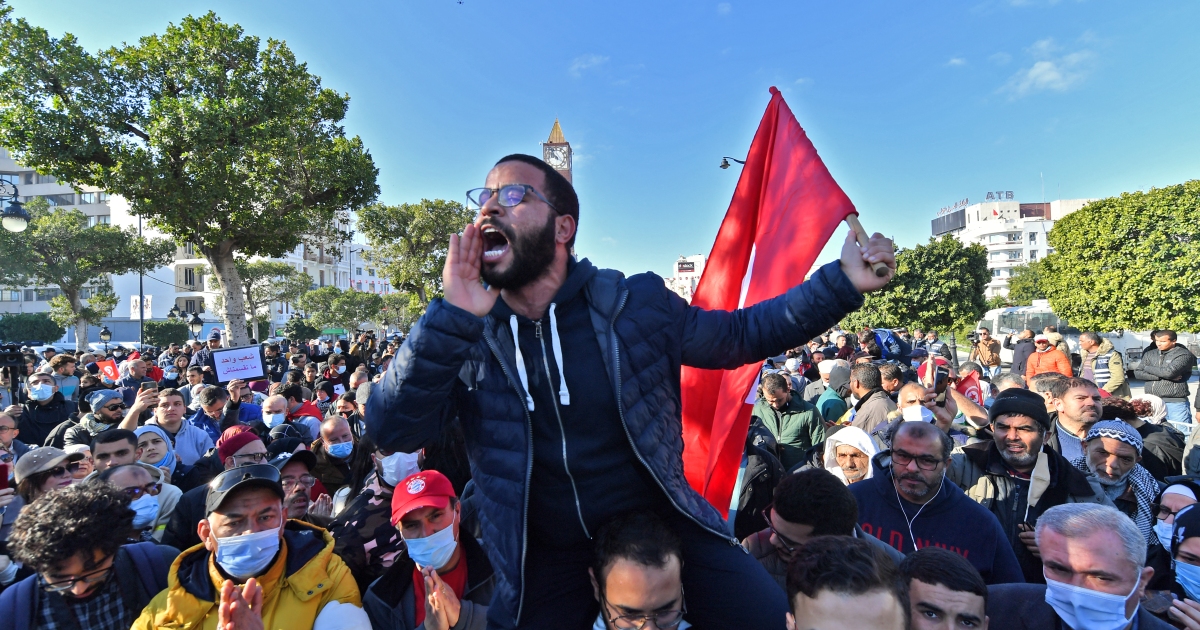 Hundreds protest in Tunisia on anniversary of revolution

Protesters rally for and against President Saied who has extended suspension of parliament until next year, sparking tensions.

Tunisian demonstrators have rallied for and against President Kais Saied as the crisis-hit country marked the anniversary of a revolution that sparked the 2011 Arab uprisings.

On Monday, he extended his suspension of parliament until elections in December 2022 and announced a nationwide public consultation to draw up a new constitution, sparking renewed tensions.

About 1,000 people gathered in central Tunis on Friday to protest against Saied, who in July this year sacked the government, suspended parliament and seized far-reaching powers.

The protesters gathered at a key city centre junction, chanting “the people want the coup d’etat to fall”, referring to Saied’s power grab, as police officers in riot gear looked on.

A few hundred metres away, past hundreds of security personnel and metal barriers, a smaller number of Saied supporters waved flags and chanted “the people want the corrupt to go on trial”.

His opponent Ennahdha and other legislators have bitterly opposed Saied’s moves, but many Tunisians tired of a system seen as corruption-ridden and ineffective have welcomed them. 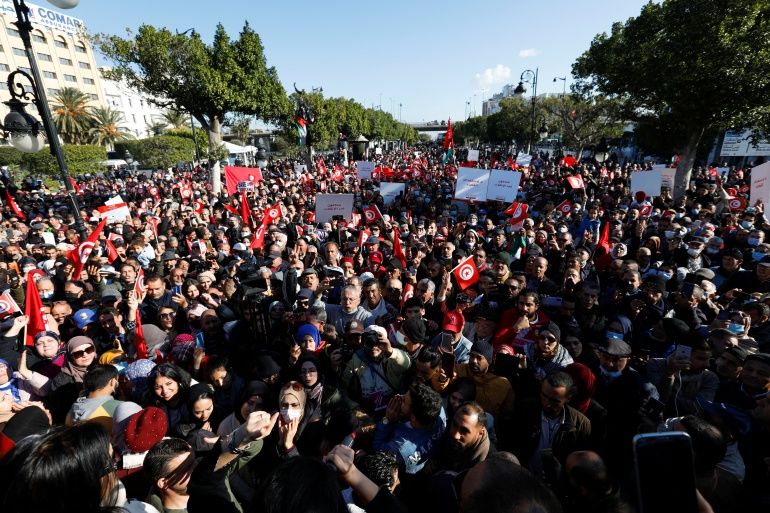 Standing with other demonstrators on Habib Bourguiba Avenue, the epicentre of Tunisia’s revolution, Nacer Medjbari said he had come from the city of Kairouan to voice support for “putting the revolution back on the right path”.

“We want a democratic system that comes from the people,” he told the AFP news agency.

Friday marks 11 years since street vendor Mohammed Bouazizi set himself alight in the marginalised town of Sidi Bouzid, sparking a four-week revolt that forced veteran leader Zine El Abidine Ben Ali from power and sparked a string of uprisings in other Arab countries.

Earlier this month, Saied moved the official anniversary of the revolution from January 14 – the date Ben Ali fled into exile – to December 17.

The president sees the revolution as having been hijacked by corrupt politicians, and has repeatedly proposed changing the 2014 constitution, which had brought in the hybrid parliamentary-presidential system he says enabled them.

The constitution had been seen as a historic compromise between Ennahdha and its secular opponents.

Abdellatif Mekki, a former senior Ennahdha official, told AFP that Saied had “grabbed power for another year, with an agenda that makes no sense”.

But Youssef Cherif of the Columbia Global Centers for North Africa said most Tunisians had shown little interest in the latest announcements, and that the opposition was “weak and divided”.

“There’s an active minority that voiced its discontent and will continue to protest” against Saied’s moves, he told AFP.

“But most of the population … are looking elsewhere, at least for now.”

For many Tunisians, the most pressing issue is the economy, which is creaking under the high inflation, debt close to 100 percent of gross domestic product (GDP) and 18 percent joblessness, all exacerbated by the coronavirus pandemic.

“We’ve lived through a black decade of hunger and impoverishment,” said pro-Saied demonstrator Medjbari. “All the economic indicators are down and unemployment has quadrupled.”

But Cherif warned that Saied “doesn’t have an economic plan to speak of”. 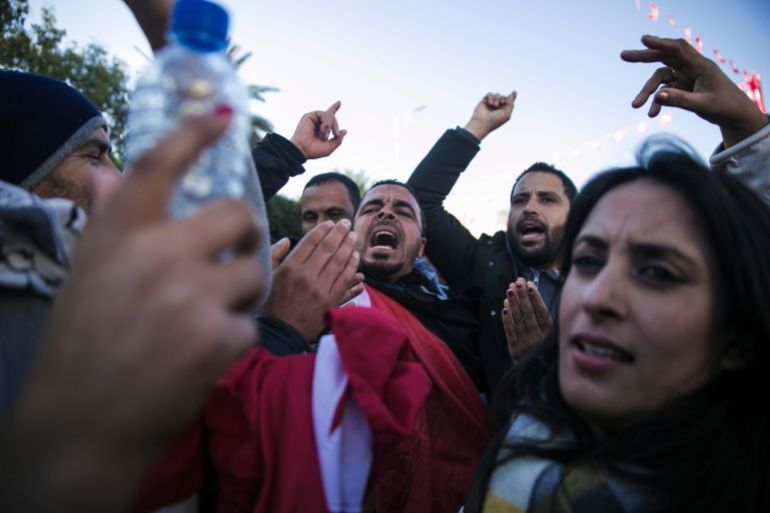 Unemployed Tunisian graduates shout slogans as they attend a protest on the anniversary of the Tunisian revolution, in Sidi Bouzid, Tunisia

Talks with international donors for a fourth bailout package in a decade remain suspended and worries are mounting that the country could default on its sovereign debt, yet Saied has prioritised rewriting the constitution.

“Who is going to finance this long transition and how are the country’s savings going to be managed in the coming months? Once again, uncertainty reigns,” Cherif said.

In the streets of Tunis, at least some Tunisians voiced support for Saied’s moves.

“We want to correct the revolution and put on its true course,” said 30-year-old Mouna Akremi.