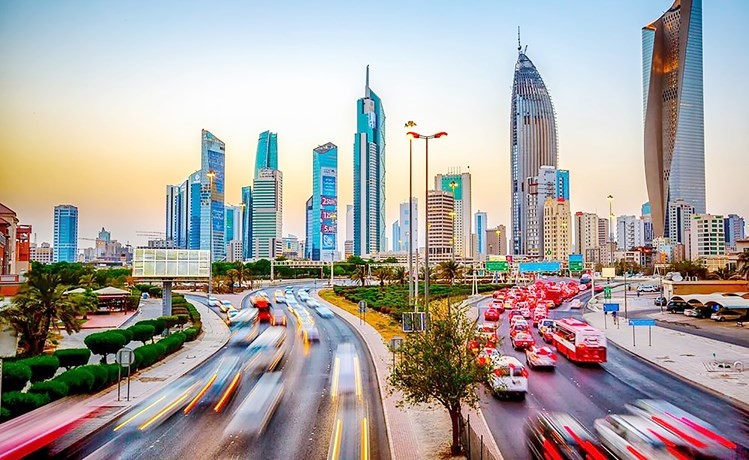 The Fitch Ratings has affirmed Kuwait’s Long-Term Foreign-Currency Issuer Default Rating (IDR) at AA- with a Stable Outlook. According to a Fitch Ratings statement, “Kuwait’s key credit strengths are its exceptionally strong fiscal and external balance sheets, while key weaknesses include frequent institutional gridlock and political constraints on reforms that would address fiscal and structural challenges stemming from heavy oil dependence, a generous welfare state and a large public sector.
The statement mentioned that Kuwait’s fiscal and external balance sheets remain among the strongest of Fitch-rated sovereigns, despite severe oil price swings since 2014. “We forecast Kuwait’s sovereign net foreign asset position will average 470 percent of GDP in 2022-2024, the highest among all Fitch-rated sovereigns and more than 10x the ‘AA’ median.” Finch Ratings continued “Gross government debt/GDP is low and we expect it to fall below 10 percent of GDP in the fiscal year ending March 2023 (FY22) against a ‘AA’ median of 49 percent. However, assuming the passage of a debt law, limited fiscal reform and lower oil prices, we forecast government debt will double to 20 percent of GDP in FY24 and rise further in subsequent years.”

On Structural Fiscal Challenge, Fitch indicated, “More than 70 percent of government spending consists of sticky current spending, including salaries and subsidies, and about 80 percent of Kuwaiti nationals are employed in the public sector. The fiscal break-even oil price (excluding investment income) will remain high (at around USD 80/bbl) and the non-oil primary deficit/non-oil GDP is extremely weak at more than 80 percent, significantly worse than regional peers.” “Kuwait has been unable to issue debt since 2017, owing to the lack of an updated debt law. The new government has said that a debt law remains a priority and we assume that it will be agreed during FY23, but a high level of uncertainty remains.

The government would still be able to meet its limited debt service obligations in coming years given the assets at its disposal, even if a debt law is not passed.” “We forecast a budget surplus of 12.2 percent of GDP in FY22, due to higher oil prices (USD 95/bbl) and production. We forecast lower oil revenue in FY23 and FY24, assuming average oil prices of USD79/ bbl and USD61/bbl in those years and broadly stable output levels (around 2.7 million b/d). This will drive a narrowing of the budget surplus to 5.9 percent of GDP in FY23 and a return to deficit in FY24.

Our forecasts assume a marginal decline in nominal government spending to below KD 23 billion (USD 75.9 million), helped by an automatic decline in fuel subsidies and spending restraint across some budget lines in the context of lower oil prices.” “Excludes investment income, our forecasts would translate into budget deficits/GDP of 2 percent and close to 10 percent in FY23 and FY24 respectively. Combined with debt service of less than 1 percent of GDP, this corresponds to the government’s fiscal financing need. In FY24 we assume this will be met via 6 percent of GDP in net domestic and foreign borrowing and around 4 percent of GDP in drawdowns from GRF assets. If a debt law Is not passed this would imply higher drawdowns from GRF assets.”

“Budget outcomes are highly sensitive to changes in oil price and production. A USD10/bbI change in our oil price assumption for 2023 would affect the budget by around 4 percent of GDP, other things equal. A change of 100,000 bbl/day of production affects the budget by around 1.5 percent of GDP,” added the statement. “Kuwait has an ESG Relevance Score (RS) of ‘5’[+] for both Political Stability and Rights and for the Rule of Law, Institutional and Regulatory Quality and Control of Corruption.

Theses scores reflect the high weight that the World Bank Governance Indicators (WBGI) have in our proprietary Sovereign Rating Model. Kuwait has a medium WBGI ranking at the 51st percentile reflecting low scores for voice and accountability, weak government effectiveness and middling scores across other governance indicators.”

Factors that could, individually or collectively, lead to negative rating action/ downgrade were structural features displaying signs of greater pressure on GRF liquidity in the absence of a new debt law, legislation permitting access to the FGF or other extraordinary measures to ensure that the government can continue to make good on its payment obligations, including but not limited to debt service. Public and External Finances showing significant deterioration in fiscal and external positions, for example, due to a sustained period of low oil prices or an inability to address structural drains on public finances.

Factors that could, individually or collectively, lead to positive rating action/ upgrade including structural features/public finances displaying evidence that Kuwait’s institutions and political system are able to tackle long-term fiscal challenges, for example, through actions to implement a clear deficit reduction plan that is resilient to lower oil prices, as well as adopting a transparent and sustainable government funding strategy.