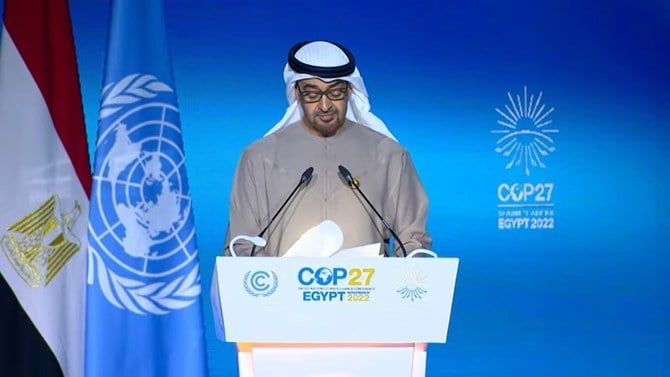 Climate change dangers target everybody with no exception: UAE president

UAE President Sheikh Mohamed bin Zayed said that the world is facing intricate and complex challenges including climate change which impacts global stability and security.
In his speech at the 2022 United Nations Climate Change Conference in Sharm El-Sheikh, Sheikh Mohamed stressed that communities must cooperate to tackle climate change and use it as an opportunity for innovation, problem-solving, and fostering economic diversity.

Sheikh Mohamed emphasized that the risks and dangers of climate change target everybody with no exception.

“Since we only have one planet is it essential that we bring together our efforts to address this challenge by engaging in climate action,” he said.

He added: “We will focus on lowering carbon emissions emanating from this sector.”

The UAE is not undertaking this effort for the first time, he said.

For decades, the UAE has followed the footsteps of its founder Sheikh Zayed Al-Nahyan to diversify the economy and to develop renewable and clean energy capacities to promote economic and social development.

The UAE has announced a strategic initiative for carbon neutrality by 2050, following the example set by the former president.

In addition, the UAE president touched on the recent USUAE agreement to invest $100 billion in clean energy and produce 100 gigawatts of clean energy in various parts of the world, saying: “The UAE continues its efforts to build bridges of cooperation and communication with members of the international community.”

The UAE will focus on supporting the implementation of the outcomes of the previous COPs as they prepare for COP28 in Dubai in 2023, he added.

All communities are invited to cooperate in finding practical solutions that can contribute to addressing loss and damage, Sheikh Mohammed said.

“We need peace, we need dialogue, and we need the war to stop,” he said.