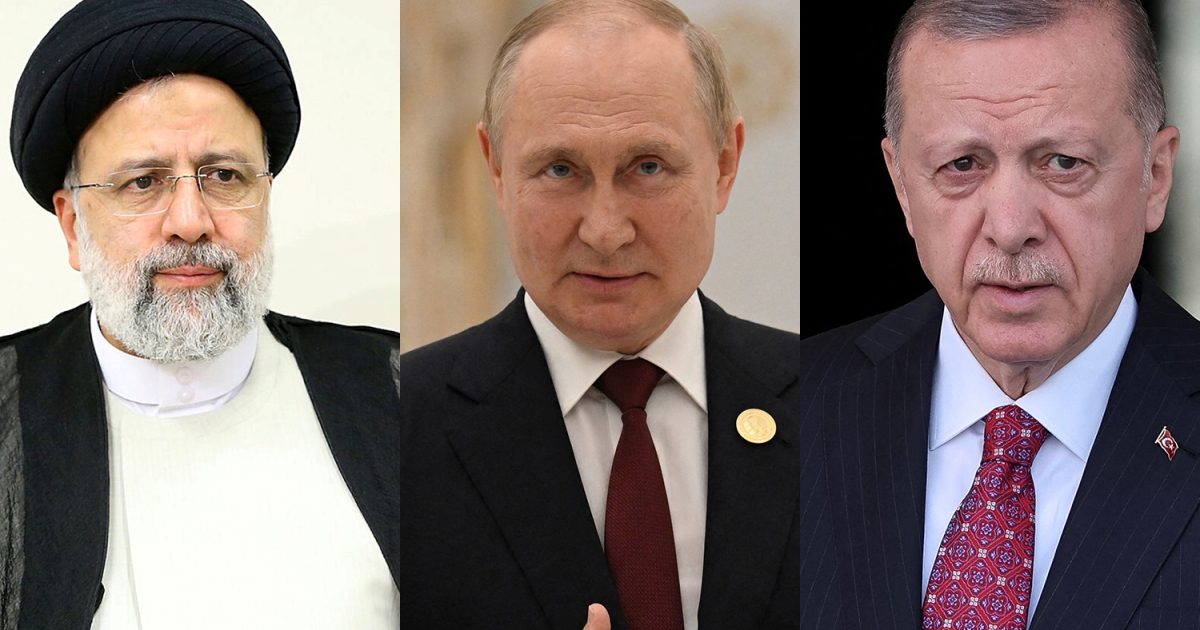 As his war on Ukraine rages, Russia’s Putin is set to visit Iran

The increasingly isolated president will meet his Turkish and Iranian counterparts in Tehran to discuss Syria as the East-West divide deepens.

The meeting, which will include Turkey’s President Recep Tayyip Erdogan, will take place in the trilateral “Astana format” aimed at resolving differences in Syria, but there is much more at stake as war rages in Ukraine.

The leaders and their delegations are also expected to hold bilateral meetings, during which issues ranging from the war in Ukraine to Iran’s 2015 nuclear deal with world powers could be discussed.

Here are six things you need to know:

What’s the situation in Syria?

The Tehran summit takes place as tensions simmer with Turkey on one side of an argument, and Russia and Iran on the other. On June 1, Turkey announced it will soon launch a new military operation in at least two northern Syrian cities to target what it calls “terrorist” Kurdish armed groups.

Russia and Iran are the two largest backers of the government of Syrian President Bashar al-Assad, who has maintained power throughout his country’s civil war, which began more than 10 years ago.

As Erdogan spoke of establishing a 30km (18.5 miles) “security zone” by “cleaning up” the two cities of Tal Rifaat and Manbij, Moscow and Tehran called on Ankara to refrain from new attacks.

Recently, Erdogan tested his leverage in NATO in an attempt to strengthen his position on Kurdish fighters in Syria.

In late June, he ultimately dropped his opposition to Finland and Sweden joining the alliance after the Nordic nations agreed to stop supporting Kurdish armed groups and extradite dozens of individuals that Turkey considers “terrorists”.

Where do Turkey and Iran stand on Ukraine?

This is a rare foreign trip for Putin, who in February launched a “special operation” with a stated aim of demilitarising neighbouring Ukraine and thwarting Kyiv’s NATO ambitions.

Erdogan has played a delicate balancing act during the Russia-Ukraine war. Turkey, which has voiced support for Ukraine while opposing the scope of Western sanctions on Russia, has tried to mediate between Moscow and Kyiv with the goal of reaching a ceasefire agreement.

But at the same time, it has sold its Bayraktar combat drones to Ukraine, which have been used in the war, angering Russia. Turkey had also opposed Russia’s annexation of Crimea in 2014.

Ankara, however, has in recent years forged close ties with Russia on energy, defence and trade while also relying on Russian tourists.

Meanwhile, Iran has refused to condemn Russia for invading Ukraine and blamed NATO’s expansion as the root of the conflict, but has opposed the war and called for dialogue to stop the fighting.

It has also relayed messages between Ukraine and Russia several times.

Does Iran want to sell drones to Russia?

Putin’s visit comes after United States national security adviser Jake Sullivan claimed last week that Iran wants to sell “hundreds” of armed drones to Russia to be used in the war in Ukraine.

CNN reported that a Russian delegation visited an airbase in central Iran at least twice in the past month, where they saw a showcase of two models of weapons-capable Iranian drones.

The Kremlin has refused to comment on the issue, but Tehran has explicitly denied the accusation, saying it will not militarily assist either side of the conflict as it wants the war to end.

Giorgio Cafiero, head of the Washington, DC-based geopolitical risk consultancy firm Gulf State Analytics, said it would be “unprecedented” if Iran were to export that many drones, and that the US claim should be viewed with a “healthy degree of scepticism”.

“Iran lacks experience exporting that many drones to another state, which should also cause one to question the validity of Sullivan’s assertion,” he told Al Jazeera.

Are tensions between the US and Iran still heated?

The Iran summit comes days after US President Joe Biden wrapped up his Middle East tour, during which he visited Iran’s arch foe Israel and rival Saudi Arabia, prompting backlash from Tehran.

It is important to interpret Putin and Erdogan’s trip to Iran within the context of “increased East-West bifurcation” following the Ukraine war, according to Cafiero.

As the war rages and Russia’s economy has taken a hit from Western sanctions, Moscow seeks stronger ties with non-Western countries that do not support the measures, he said.

“There is a strong message being sent to Washington about Moscow, Tehran, and Ankara’s desires to work together without US policies, positions, and agendas being imposed on them.”

There is also the issue of the 2015 Iran nuclear deal – of which Russia is a member. During Biden’s trip, the US, Israel and some Middle East leaders underlined their goal that Iran never gains a nuclear weapon.

Tehran insists it will never seek a bomb, but its indirect negotiations to restore the accord that Washington unilaterally abandoned in 2018 have stalled for months over disagreements on what sanctions the US needs to lift.

The three leaders are expected to hold important bilateral talks on the sidelines of the Nur-Sultan talks.

In addition to the safe export of grain from Ukraine, Putin and Erdogan could discuss energy, trade and other ways of improving relations.

Iran, meanwhile, wishes to sign 20-year cooperation agreements with both nations, and has made proposals in recent months.

As Iran’s economy suffers from Washington’s stringent sanctions, the Iranian president has focused on a regional diplomacy initiative to counter the effects.

Iran also wants to boost trade with Russia and Turkey, and officials have discussed using national currencies with Moscow.

“Russia and Iran have similar import and export demands – both export similar products which is part of the reason why Moscow has far more substantial economic relations with Turkey than Iran,” said Nicole Grajewski, a research fellow with the International Security Programme at the Belfer Center for Science and International Affairs.

She told Al Jazeera that even if Russian businesses are willing to expose themselves to secondary US sanctions, Moscow has been looking to increase domestic production following the war, which would mean it would be less inclined to import some Iranian goods.

Grajewski said Putin and Raisi are unlikely to finalise the 20-year agreement during this visit, “but there seems to be a greater impetus to strengthen ties compared to previous decades”.