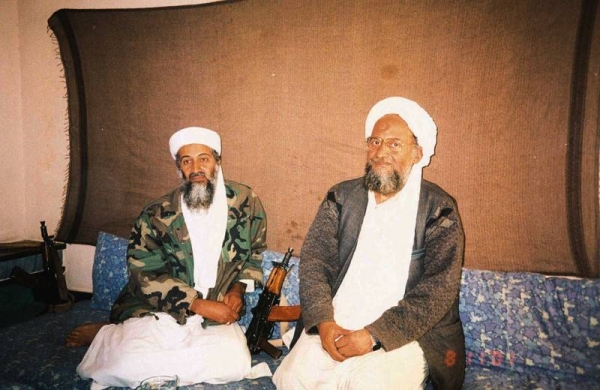 Al-Zawahri's path: From Cairo clinic to top of Al-Qaida

The doors of jihad opened for Ayman Al-Zawahri as a young doctor in a Cairo clinic, when a visitor arrived with a tempting offer: a chance to treat fighters battling Soviet forces in Afghanistan.
With that offer in 1980, Al-Zawahri embarked on a life that over three decades took him to the top of the most feared terrorist group in the world, Al-Qaida, after the death of Osama bin Laden, Associated Press (AP) reported.

Already an experienced militant who had sought the overthrow of Egypt’s “infidel” regime since the age of 15, Al-Zawahri took a trip to the Afghan war zone that was just a few weeks long, but it opened his eyes to new possibilities.

What he saw was “the training course preparing mujahedeen youth to launch their upcoming battle with the great power that would rule the world: America,” he wrote in a 2001 biography-cum-manifesto.

Al-Zawahri, 71, was killed over the weekend by a U.S. drone strike in Afghanistan. President Joe Biden announced the death Monday evening in an address to the nation.

The strike is likely to lead to greater disarray within the organization than did bin Laden’s death in 2011, since it is far less clear who his successor would be.

Al-Zawahri became crucial to turning the jihadi movement to target the United States as the right-hand man to bin Laden. Under their leadership, the Al-Qaida terror network carried out the deadliest attack ever on American soil, the Sept. 11, 2001, suicide hijackings.

The attacks on the World Trade Center and Pentagon made bin Laden America’s Enemy No. 1. But he likely could never have carried it out without his deputy.

When the 2001 U.S. invasion of Afghanistan demolished Al-Qaida’s safe haven and scattered, killed and captured its members, Al-Zawahri ensured Al-Qaida’s survival. He rebuilt its leadership and installed allies as lieutenants in key positions.

He also became the movement’s public face, putting out a constant stream of video messages while bin Laden largely hid.

With his thick beard, heavy-rimmed glasses and a prominent bruise on his forehead from prostration in prayer, he was notoriously prickly and pedantic. He picked ideological fights with critics within the jihadi camp, wagging his finger scoldingly in his videos. Even some key figures in Al-Qaida’s central leadership were put off, calling him overly controlling, secretive and divisive — a contrast to bin Laden, whose soft-spoken presence many militants described in adoring, almost spiritual terms.

After Bin Laden was killed in a U.S. raid on his compound in Abbottabad, Pakistan, al-Qaida proclaimed al-Zawahri its paramount leader less than two months later.

Al-Zawahri was born June 19, 1951, the son of an upper-middle-class family of doctors and scholars in the Cairo suburb of Maadi. His father was a pharmacology professor at Cairo University’s medical school.

From an early age, al-Zawahri was enflamed by the radical writings of Sayed Qutb, the Egyptian Islamist who taught that Arab regimes should be replaced by Islamic rule.

In the 1970s, as he earned his medical degree as a surgeon, he was active in militant circles.

Then came the 1981 assassination of Egyptian President Anwar Sadat by Islamic Jihad militants. The slaying was carried out by a different cell in the group — and al-Zawahri wrote that he learned of the plot only hours before the assassination. But he was arrested along with hundreds of other militants and served three years in prison.

After his release in 1984, al-Zawahri returned to Afghanistan and joined the Arab militants from across the Middle East fighting alongside the Afghans against the Soviets. He courted bin Laden, who became a heroic figure for his financial support of the mujahedeen.
#Afghanistan  #Joe Biden