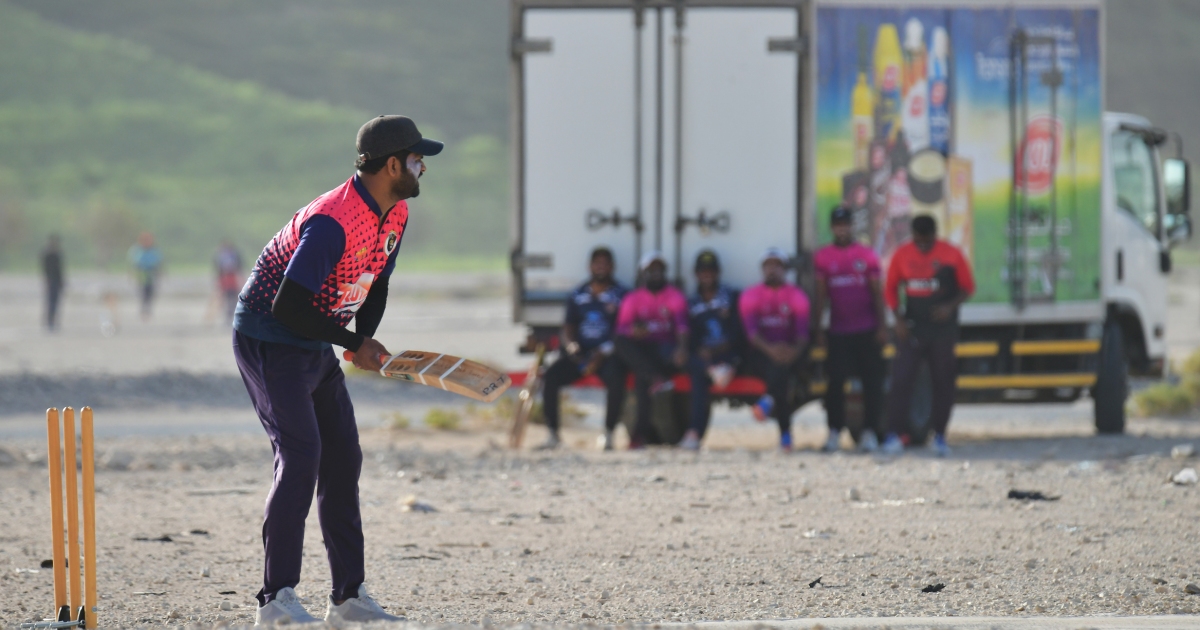 ‘Adrenaline rush’: How street cricket has evolved in Qatar

Cricket has gone from friendly matches to competitive fixtures on dusty fields and car parks.

It was a Friday afternoon at Al-Thumama ground just outside Qatar’s capital Doha.

About two hours before sunset, the heat was bearable. The ground features sand and sharp rocks. Windy conditions, coupled with heat and humidity, made standing difficult, let alone playing cricket.

Every weekend, some 20,000 South Asian men working in Qatar leave their air-conditioned rooms in pursuit of happiness that lasts about five hours.

Because of the conditions on that particular day, the crowd was one-fifth of what would be seen normally and only four of the 20-plus cricket pitches were occupied. On one of them, a practice match between members of Hitters Club, the biggest in Qatar’s tennis ball cricket, was taking place.

Dr Saju Thomas, an emergency physician with Hamad Medical Corporation, was one of them. In 2011, he saw a cricket match taking place on a ground near the hospital he worked at.

Next weekend, he was among the players. 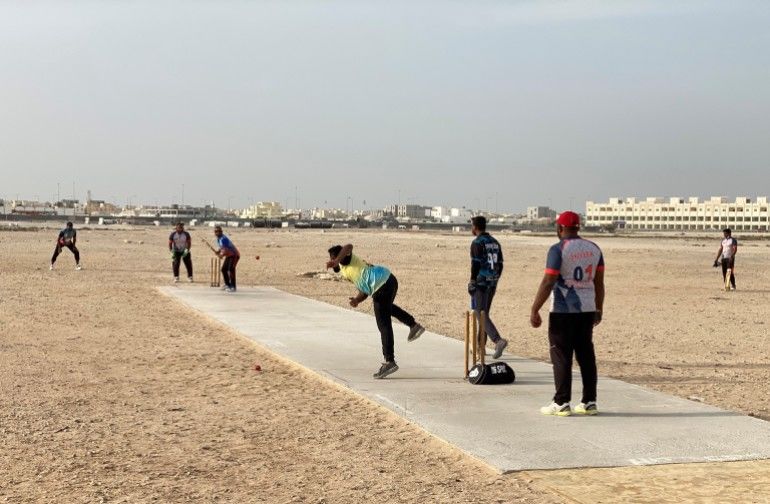 A cement pitch on a dusty field in Qatar

Over the years, Qatar’s street cricket has evolved, with organised leagues, uniforms, statistics-keeping and prize money.

Prior to the COVID pandemic, millions of Qatari riyals were spent each season.

According to MK Riyaj, who played a role in formalising the game in the country, Qatar has about 2,000 cricket clubs.

SensorTower, a mobile app market insights firm, told Al Jazeera that CricClubs, an app that stores game statistics, has been downloaded more than 21,000 times in Qatar and the company’s figures also indicate that Qatar has more players compared with the UAE and Oman, where the game seemingly enjoys more patronage.

The relaxed-rules street cricket, played in lanes and parking lots in addition to the barren fields, has also created a lot of international players.

Rizlan Iqbar, 36, is the vice captain of Qatar’s national team. He played on the streets of Qatar before making his international debut.

“I encourage it [street cricket] because it teaches batters to score on every ball via unorthodox shots that are required in modern cricket. It trains bowlers to be accurate, bowl yorkers, slower balls, including slow bouncers,” Iqbar, a Sri Lankan national, told Al Jazeera.

He had never played cricket in Kerala as he came from a football-crazy village.

“On Fridays, I followed my neighbours from Mumbai in the Msheireb area to the ground and helped them by fetching balls from the boundary,” Ali told Al Jazeera.

Ali would tell you how he utilised the well-lit vicinity of Umm Ghuwailina mosques for night matches, how passionately he devoured Viv Richards, Joel Gardner and Richie Richardson trivia in his neighbour’s Sportsweek collection, and how his 1988-90 vacation kept kindling his passion through a Sunil Gavaskar show “Greatest One Days” on India’s national television.

“It was the age of cricket balls. Then, a Pakistani friend introduced us to taped tennis balls.” 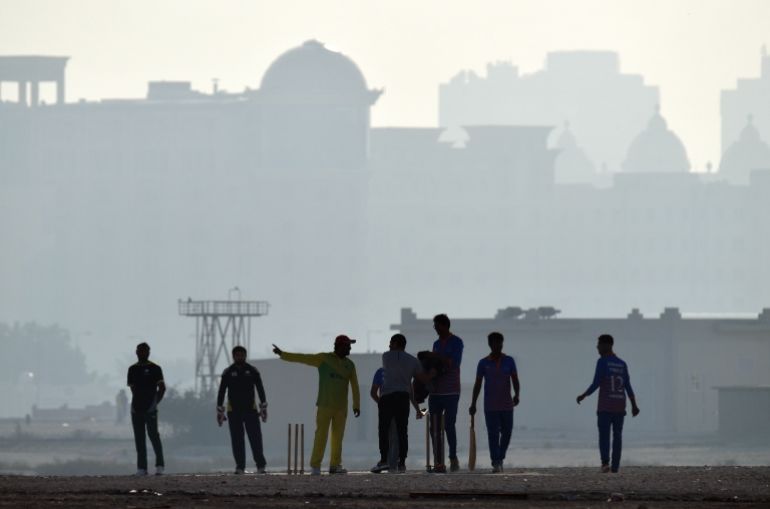 Over the years, Qatar’s street cricket has evolved, with organised leagues, uniforms, statistics-keeping and prize money.

Tennis balls wrapped in the electrical tape are a common sight on the streets of Pakistan. It adds to zip and bounce, and ripped tape helps with the swing.

After more than three decades of running and organising teams, Ali formed his own group Spartans Eleven in 2014.

Every week, he would fund the travel and food bill for the players.

“It’s a secret I keep from even my wife,” he said when asked about the funds.

Back at Al-Thumama ground, the wind has picked up and the heat shows no signs of abating. So what brings these players out in the middle to brave Qatar’s weather?

“Those four to five hours are incredible,” Althaf Ibrahimkutty, a civil engineer, said.

“It’s a rush of adrenaline, a break from a dull week, and a time to catch up with friends.”

For many out there, being a cricketer was their primary identity, no matter what their profession was. Some played for their country’s junior and provincial teams. Others aspire to be heroes to millions. Some just want a break from their weekly routine.

Vishnu Chandran, a 32-year-old engineer, looked up cricketers in Qatar before he left Dubai four years ago. Red Army’s Joji George, an industrial nurse, likens it to an addiction.

Kazim Mohammed, an Indian neurosurgeon, said his Doha Friends Eleven is the “most brotherly club”, enlisting players from all over South Asia who are doctors and officials in health and police departments.

Umar Mushtaq, an anesthesiologist who played for Allama Iqbal Medical College in Lahore, is a fan of taped tennis balls for their “tear and wear make them swing like a cricket ball”. He is one of the organisers of the game in the College of the North Atlantic–Qatar campus where about 50 doctors turn up after their shifts.

Cricket being played on a Friday morning in Doha

In 2015, Riyaj, then a 27-year-old interior design marketeer, found cricket in Qatar valueless in the absence of statistics.

“Globally, that’s how teams are ranked,” Riyaj said. He and his friends made about six teams update their statistics every Saturday in a WhatsApp group which went on to become an Excel sheet followed by a monthly rank list.

“That year, we ran the first tennis ball league in Qatar.”

The development stole the innocence of cricket in Qatar. Playing for pure pleasure was gone. It became a competition.

Qatar’s development in the lead-up to the 2022 World Cup also meant open spaces were taken up for construction. One ground that saw more than 100 players in action every Friday is now the biggest Doha Metro railway station in the capital. Many playing doctors in Al-Sadd said they miss their ground in front of the hospital. It has now become a parking lot.

Every Sunday, players respond with a “raised hand” emoji to a roll-call in the “Hitters Official” group if they want to play the next weekend’s matches.

Early respondents got to play league matches, and the rest are roped in for friendly games.

On the ground, drained, sweating and with sand in their hair, the players shake hands after their match and head to the boundary where their cars, with refreshments stocked, are parked.

The discussions over water and juices are not restricted just to how they performed in the last five hours. They are more about how to take on their opponents next Friday.