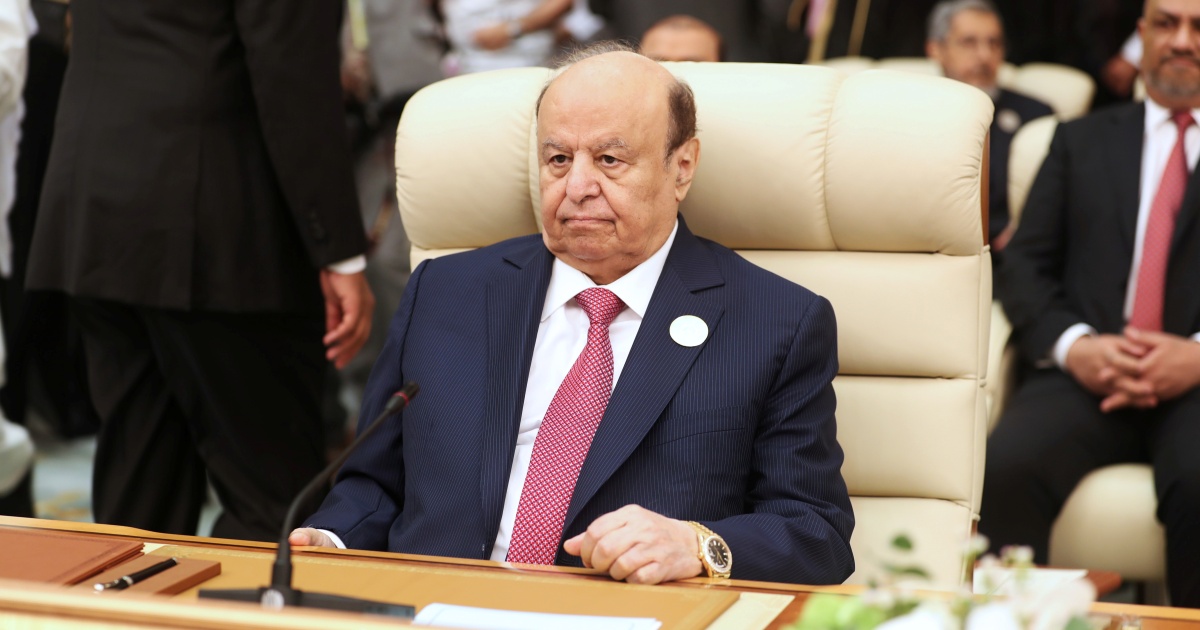 What lies ahead for Yemen after President Hadi’s exit?

Lack of alternatives and international legitimacy kept Hadi in power regardless of being in exile and unpopular.

The end of President Abd-Rabbu Mansour Hadi’s period in power is not being mourned by many Yemenis.

That says a lot about the presidency of a man seen as an “accidental” leader who has been unable to lead government forces effectively during a now almost-eight-year civil war that has decimated the country.

Hadi, former vice president of 33-year leader Ali Abdullah Saleh, was parachuted into the presidency in 2012 when Saleh was forced out after a year of Arab Spring protests.

He was supposed to be in power for two years and serve as a transition to full, inclusive Yemeni democracy.

Instead, Hadi turned a blind eye to the rising power of the Iran-backed Houthi rebels in the north, who eventually took the capital, Sanaa, in 2014, and forced Hadi to flee in 2015.

Hadi failed to rise to the challenge of being a wartime leader.

Stuck in Riyadh, he appeared subservient to Saudi Arabia, which was now fighting the Houthis on his behalf.

Yemenis had a silent president, one who spoke to his people on camera only a handful of times over the past few years. As war raged, salaries were unpaid and a humanitarian disaster spread.

So what kept Hadi, despite his exile and unpopularity, as president for so long?

A lack of an alternative that could be accepted by the divided anti-Houthi coalition, along with Hadi’s “legitimacy” as the internationally recognised president.

It appears now, however, that the Saudis have had enough, and decided that the alternative is in fact to group representatives from the different anti-Houthi groups into one presidential council, in the hope that it keeps them all happy.

Observers should not presume that this group of eight, announced on Thursday, will remain united.

One of them, Aidarous al-Zubaydi, believes in the secession of southern Yemen from the state and labels himself as the southern president.

The interests represented on the presidential council are bound to clash. The question is whether they will be able to stay on message and put their divisions to one side, for now.

The departure of Vice President Ali Muhsin, a powerful military man who has been influential and divisive for more than 40 years, will be welcomed by many, in particular the United Arab Emirates-backed factions in Yemen.

Muhsin has long been associated with Islah, Yemen’s Muslim Brotherhood-influenced party, which is deeply opposed by Zubaydi’s Southern Transitional Council, and other UAE-backed groups.

However, Islah will be placated by the inclusion on the presidential council of Sultan al-Aradah, the popular governor of Marib who is close to him, and the president of the council, Rashad al-Alimi, who has good relations with the party leadership.

Saudi Arabia and the UAE have quickly shown their support for the presidential council to the tune of $3bn to prop up the Yemeni economy.

The reluctance over the past few years to give much in the way of economic aid and weapons to the Yemeni government, which the Saudi-led coalition was fighting on behalf of, clearly showed the coalition’s dissatisfaction with Hadi and those around him.

It was a key reason for the Houthis’ military expansion in that period.

Is this now a government that Saudi Arabia and the UAE feel they can deal with? If it is, will they now ramp up their support? And what does it mean for Yemeni sovereignty when neighbouring powers have such a hold over its government and its very makeup?

The elephant (not) in the room is of course the Houthis, who refused to attend the Riyadh talks that preceded the announcement of the presidential council.

Houthi leaders immediately denounced the presidential council, labelling it as imposed by foreigners and not representative of Yemen. The group has also argued that this further undermines the claim that the Yemeni government is legitimate.

In reality, negotiations between the Saudis and the Houthis have been ongoing for months. A two-month ceasefire went into effect this month and is a sign that there is a push, at least temporarily, for de-escalation.

This was augmented further when, speaking after the formation of the presidential council, Yemen’s Saudi-backed Prime Minister Maeen Abdel Malik said the military solution in Yemen had “failed”.

That acknowledgement means that the public narrative coming from the Saudi-led coalition and the Yemeni government is that political negotiations are the only solution to the war and that is the task of the presidential council.

The question now is whether Yemen’s elites are willing to give a seat at the table to the Houthis, and whether the Houthis can even be trusted to share rule at all.

If those talks fail once again, a transformation of this political presidential council into a war council may be seen quickly – together with a continuation of this devastating conflict.