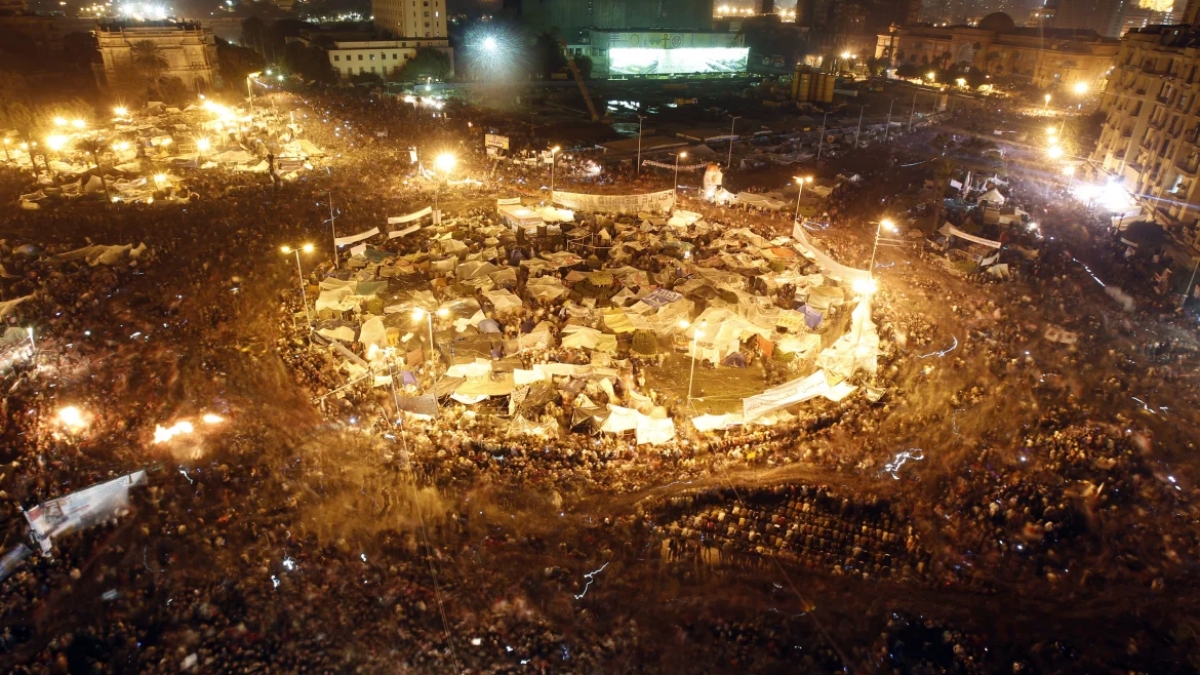 What happened during Egypt’s January 25 revolution?

The country marks 12 years since the start of demonstrations that led to the downfall of longtime ruler Hosni Mubarak.

The 2011 revolution in Egypt started with marches, demonstrations and civil resistance on January 25.

Protesters from across the Arab world’s most populous country were inspired by the uprising in Tunisia, where demonstrators succeeded in bringing down the government.

“Down with corruption, down with autocracy, down with dictators.” These were the chants by an increasing number of Egyptians demanding the overthrow of President Hosni Mubarak, who had been in power for 30 years.

According to Amnesty International, more than 840 people were killed during the protests, which ultimately led to Mubarak stepping down on February 11.

Since then, Egypt experienced its first free and fair presidential election, followed by a military coup in 2013, which rolled back many of the revolution’s gains.

But the uprising remains a cherished memory and a source of inspiration for many Egyptians.

Here is a chronology of Egypt’s 18-day revolution:

On a national holiday to commemorate the police force, thousands of Egyptians took to the streets of downtown Cairo, calling it a “day of rage”. Similar protests were reported in other towns across the country.

After a few hours of relative calm, police and demonstrators clashed with police who fired tear gas and used water cannon against demonstrators. 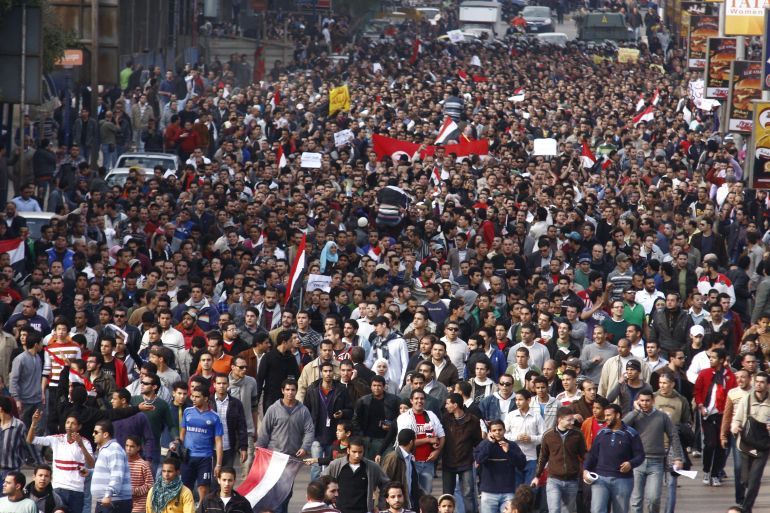 A crowd of demonstrators walks through Cairo on January 25, 2011 to demand the end of President Mubarak’s nearly 30 years in power

Internet and mobile services were disrupted across the country before a new wave of protests planned after Friday prayers.

Thousands of police were ordered onto the streets of Cairo, Suez and Alexandria to quell anti-government demonstrations. Riots continued throughout the night. 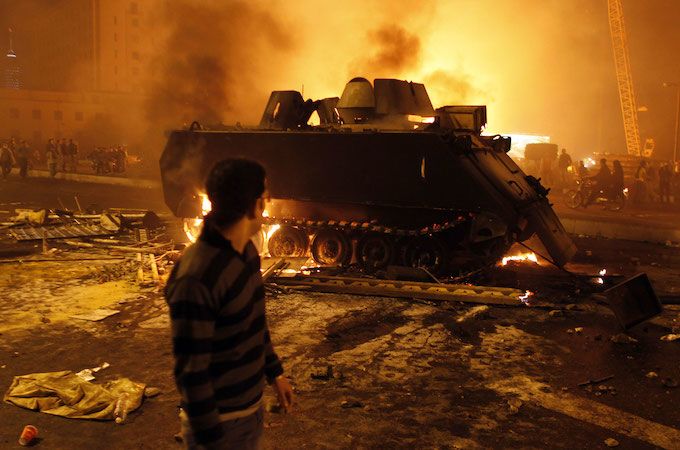 A protester looks at a burned Egyptian army armoured vehicle in downtown Cairo on January 28.

Protesters continued to defy the military-imposed curfew. About 250,000 people gathered in Cairo’s Tahrir Square and hundreds marched through Alexandria. 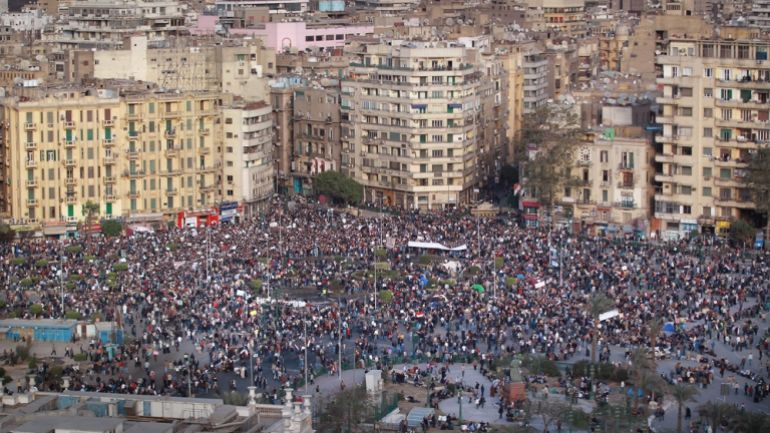 Protesters defy the curfew in Tahrir Square on January 31, 2011, in Cairo, Egypt. As Mubarak struggles to regain control after six days of protests, he appointed Omar Suleiman as vice president

Preparations began for another day of demonstrations against Mubarak’s regime. The army was still deployed with tanks throughout different positions in and around Tahrir Square in central Cairo.

Up to 1,500 people were injured, some of them seriously, and by the day’s end, at least three deaths were reported by the Reuters news agency, quoting officials.

Pro-democracy protesters said the military had allowed thousands of pro-Mubarak supporters, armed with sticks and knives, to enter the square. 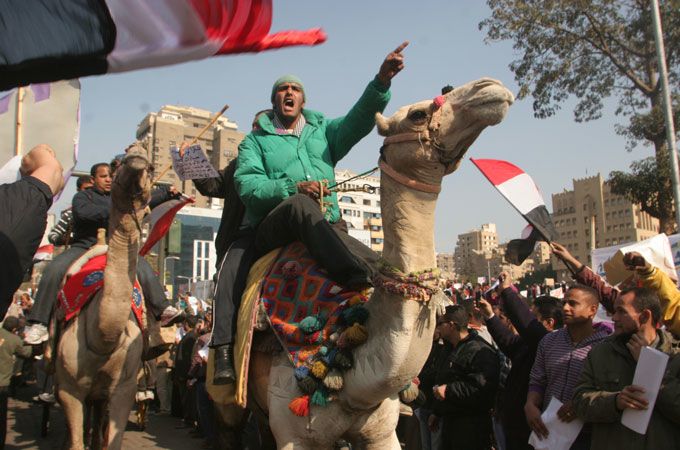 Supporters of embattled President Mubarak ride camels and horses as they clash with protesters in Tahrir Square, February 2, 2011

Hundreds of thousands of anti-government protesters gathered in Tahrir Square for what they termed the “Day of Departure”.

Chants urging Mubarak to leave reverberated across the square, as the country entered its 11th day of unrest and mass demonstrations. 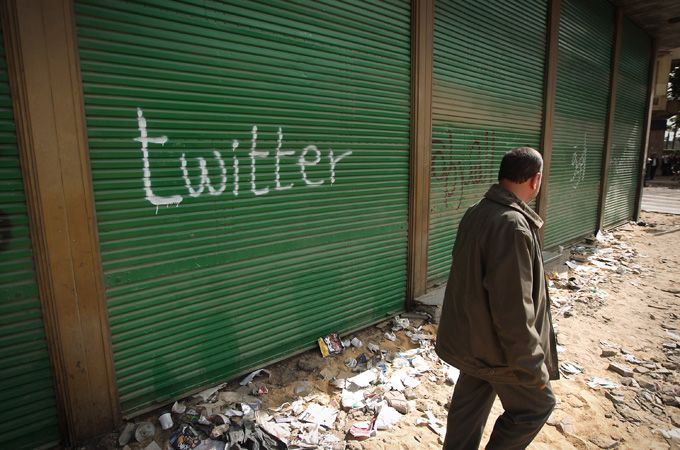 A shop in Tahrir Square is spray-painted with the word Twitter after the government shut off internet access on February 4, 2011, in Cairo

Amid rumours that he would be stepping down that night, Mubarak gave a televised speech that he said was “from the heart”. He repeated his promise to not run in the next presidential election and to “continue to shoulder” his responsibilities in the “peaceful transition” that he said would take place in September.

Protesters in Tahrir Square reacted with fury. They waved their shoes in the air and demanded the army join them in revolt. 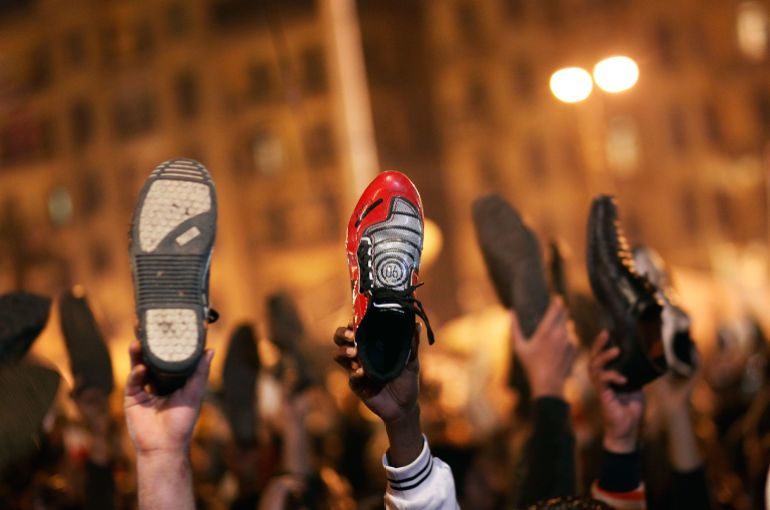 Anti-government protesters raise their shoes after a speech by Mubarak, February 10, 2011, in Cairo

After 18 days of protests, Omar Suleiman, the vice president, announced that Mubarak would resign as president and hand over power to the Supreme Council of the Armed Forces.

Here are the 30 seconds that saw the end of 30 years of Mubarak’s rule over Egypt:

The revolution ushered in an era of uncertainty as an already weary economy worsened and rights abuses against public dissent intensified. It brought about some change when the country’s first democratic elections in 2012 saw the Muslim Brotherhood’s Mohammed Morsi take office.

But within a year, a military overthrow led by Abdel Fattah el-Sisi deposed Morsi and banned the Muslim Brotherhood from participating in political activities.