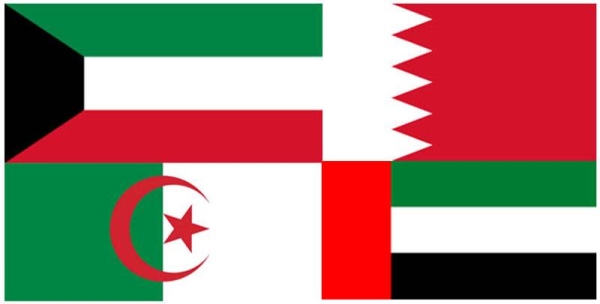 The United Arab Emirates (UAE) confirmed unwavering stance with Saudi Arabia in its quest to support world energy stability and security in what achieves the interests of producers and consumers alike and enhances economic growth and development in the world.
In a statement, the UAE Ministry of Foreign Affairs and International Cooperation expressed support of the UAE for the Saudi Foreign Ministry statement on a review of the oil situations and production cuts, noting that the OPEC+ decision was vote-based collective.

In its capacity as member of the OPEC and partner of Saudi Arabia, the UAE stresses the technological nature of OPEC+ decision and rejects statements pushing towards politicizing it, UAE statement said.

In a statement, the Bahraini Ministry of Foreign Affairs lauded the pivotal role of Saudi Arabia in its quest to guarantee world energy security and oil market stability in what achieves the interests of producers and consumers alike and enhances economic growth and prosperity in the world.

The Bahraini ministry statement cited the Kingdom’s prudent leadership of the G20 two years ago showcasing its keenness to protect the environment through the Saudi Green and Middle East Green Initiatives as well as its prominent role among the world’s leading humanitarian assistance donors.

Bahrain also expressed gratitude of the Saudi Arabian honorable positions in settling regional and international conflicts peacefully, combating extremism and terror and providing support for international endeavors to end current wars and crises within its commitment to live up to the UN charter and principles of the international law.

In Kuwait, the Kuwaiti Ministry of Foreign Affairs has praised the pivotal role and contributions of Saudi Arabia in facing regional and international challenges in a way that preserves joint interests of countries, maintains international peace and security, and supports balance of oil markets and the global economic stability.

In a statement on Tuesday, the ministry said: “The decision made by OPEC+ was a result of pure economic studies that took into consideration balance between supply and demand in international oil markets in a way that protects these market form volatilities and serves the interests of producers and consumers alike, noting that the decision was made unanimously by all OPEC+ member states as per the prevailing norms in international organizations.”

In Algiers, the Algerian Energy Minister Mohamed Arkab confirmed Tuesday that the recent OPEC+ decision to reduce production is a “purely technical” response to the international economic circumstances and the state of the oil market that OPEC and allies from outside producers are working to address to achieve a balance between supply and demand.

“The Oct. 5 agreement, which was unanimously ratified by the countries of the Declaration of Cooperation in Vienna, is a purely technical response based on purely economic considerations,” Arkab said in a statement carried by the Algerian Press Service (APS).

He pointed out that “OPEC+, like everyone around the world, is preoccupied with the exacerbation of uncertainty about the global economy and the decline in demand for oil, so we decided, as he said, to revert to the level of supply that was decided last May.”

He added that the “OPEC+” bloc, through its decision to reduce total production by two million barrels per day, starting from Nov. 1, does not deviate from the endeavor it has pursued since 2016 to support the stability and balance of the international oil market.

The Algerian minister’s statements are consistent with those made by the Secretary-General of the Organization of the Petroleum Exporting Countries (OPEC) Haitham Al-Ghais during his visit to Algeria on Sunday and Monday.

He stressed that OPEC’s decisions are purely technical, aimed at stabilizing the oil market with regard to supply and demand and has nothing to do with politics, recalling previous decisions taken by OPEC when the organization had to deal with, per the interests of the market, and the vision of member states in the need to maintain stability in the long term, to protect the interests of all parties: producers and consumers alike.

In Amman, the Jordanian government affirmed Tuesday that it supports all steps taken by Saudi Arabia to protect its security, stability and interests.

Official Spokesman of the Jordanian Ministry of Foreign Affairs Ambassador Sinan Al-Majali said that the ministry is following up on reactions to the OPEC+ decision to cut production.

Ambassador Al-Majali added that this is a technical issue related to oil market stability and its requirements, regulating supply and demand and protecting the interests of both producers and consumers, that should be approached on technical basis within its economic context, away from political bickering that does not serve common goals and interests.

In Islamabad, Pakistan expressed solidarity with the leadership of Saudi Arabia, in the wake of statements made against the Kingdom in the context of OPEC+ decision.

The statement reaffirmed that Pakistan has long-standing, abiding and fraternal ties with Saudi Arabia. It added that Pakistan encourages a constructive approach on such issues based on engagement and mutual respect.

Meanwhile, the Republic of Djibouti expressed its full solidarity with Saudi Arabia regarding the statements issued in the wake of the “OPEC” decision to reduce oil production.

It supported Saudi Arabia’s stance and clarifications with regard to the decision which was taken unanimously by the member states of the group for purely technical and economic considerations in order to maintain stability international oil markets.

Djibouti appreciated the Kingdom's position and pivotal role in maintaining the stability of oil markets throughout history and contributing to addressing economic challenges, hailing the Kingdom’s wise diplomacy in accordance with the principle of mutual respect among the states and the promotion of common interests.