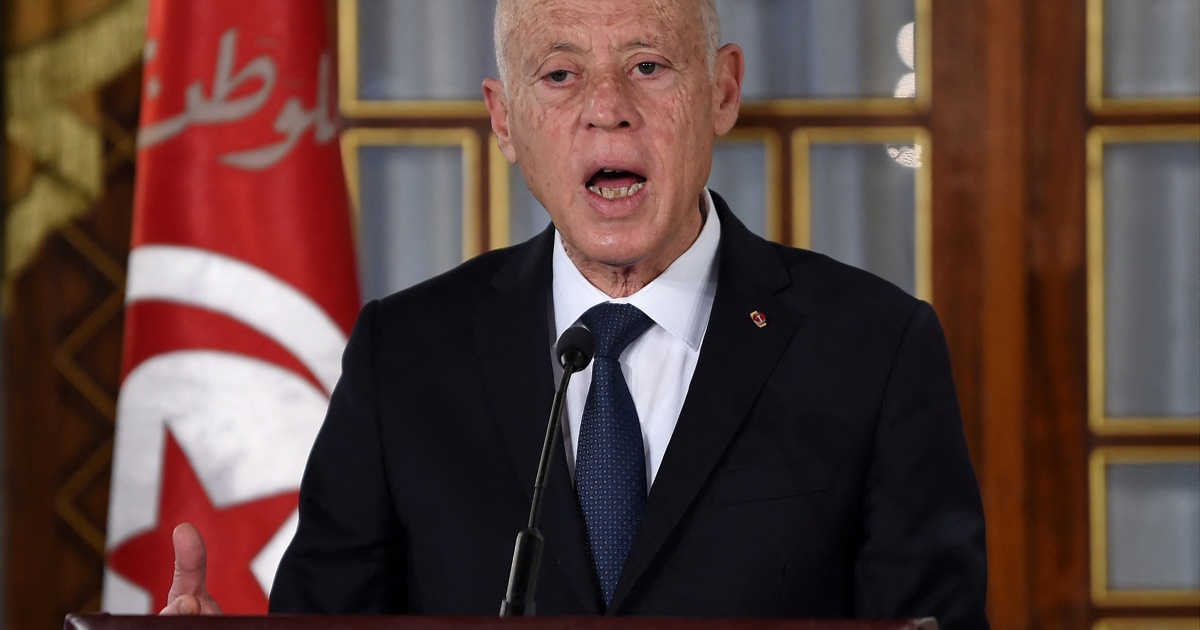 Tunisia caught between president and parliament as crisis deepens

Both Tunisian parliament and President Saied are trying to exert authority, as Saied announces parliament’s dissolution.

The Tunisian President Kais Saied’s decision to dissolve parliament followed a day of political drama, and one that could define the outcome of Tunisia’s continuing political crisis.

The announcement on Wednesday followed a decision by the Tunisian parliament to reconvene virtually in defiance of Saied, who had suspended parliament last July, and a vote to end the president’s emergency rule.

Saied had done his best to stop that vote from taking place, blocking online video platforms Zoom and Microsoft Teams throughout Tunisia for a part of the day in a bid to prevent the MPs from voting on the motion.

The president then delivered an angry late-night address hours after the vote had taken place, accusing parliament of attempting to “stage a coup with foreign intervention”.

Saied went on to declare that he would not hold elections within three months following the current constitution. Instead, he would proceed with drafting a new constitution, which will be put to a referendum on July 25, and then hold elections in December, in which “conspirators will be forbidden from running”, a reference to opposition politicians.

Saied’s escalation reflected the significance of Wednesday’s parliamentary vote, which was the most serious challenge to Kais Saied since he sacked the government, suspended parliament and took emergency powers eight months ago.

At the time, Saied, who was elected in 2019, said that his measures were necessary to fight corruption. Although he received support from many Tunisians at the time, opposition has grown as he has seized more power.

The standoff between the president and parliament has left Tunisia in uncertain legal territory, with both sides claiming authority, and Saied in control of the country’s top judicial body.

“The parliamentary vote is historic because it removes the legal legitimacy from [Saied’s July 2021] coup, and delivers a clear message to the Tunisian people and Tunisia’s international partners that the parliament is intent on fulfilling its role in protecting the democratic gains of the 2011 revolution,” an anti-Saied Tunisian member of parliament, Issam Bargougi, told Al Jazeera, referencing the Arab Spring revolution that overthrew former President Zine el Abidine Ben Ali.

“The parliament is defending the state institutions, and asserting that it is the primary legislative body and has authority over the president, who has revolted against the Constitution,” Bargougi, who has been sentenced by a military court in absentia for opposing Saied’s power grab, added.

Wednesday’s vote came amid testing times for Saied, with the problems that plague the Tunisian economy showing few signs of abating.

Prices of basic goods have soared and bakeries across the country have announced closures.

Saied has also found himself under international pressure as former backers, such as the United States and the European Union, worry that he is moving Tunisia away from democracy.

“It is very possible that the international community, the International Monetary Fund, the World Bank, and other international donors will seek to create greater distance between themselves and Kais Saied,” Khalid Hermasi, a Tunisian political commentator, told Al Jazeera.

Saied seemed likely to clamp down on opposition in the future; prominent supporters welcomed Saied’s actions and have called for him to suppress dissent.

“The full force of the law will be brought to bear [on members of parliament who voted against Saied],” said Riyadh Jrad, a Tunisian media personality, in an appearance on local television.

Yet, the relevance of the vote may not be Saied’s to decide. Instead, Tunisia’s trade unions and army may intervene.

“We will seek to work with all the democratic forces in the country in order to force Kais Saied to recognise the decision made today,” said Bargougi. “The decision in parliament today will be delivered clearly to the leaders of the Tunisian army and the trade unions, and these powers will cease to lend their support to Kais Saied from now on.”

“[The vote] ensnared Kais Saied and put him in a difficult position, particularly with regards to his relationship with the military and security institutions,” said Hermasi. “The ball is in the court of the security forces, given that Article 18 of the Constitution permits the army to intervene in situations in which there is a clear threat to the state.”

While the army has the power to reopen the parliament building and restore access to its members, thereby ending Saied’s emergency rule, it is still unclear what its position will be.

The UGTT trade union leadership, despite its criticism of Saied, has still been broadly supportive of the president, which could carry him through despite the growing opposition.

“The decision to dissolve parliament came late, but it was necessary,” said Sami al-Tahiri, the UGTT secretary-general. “Parliament was already suspended and effectively dead. We honour the dead by burying them.”