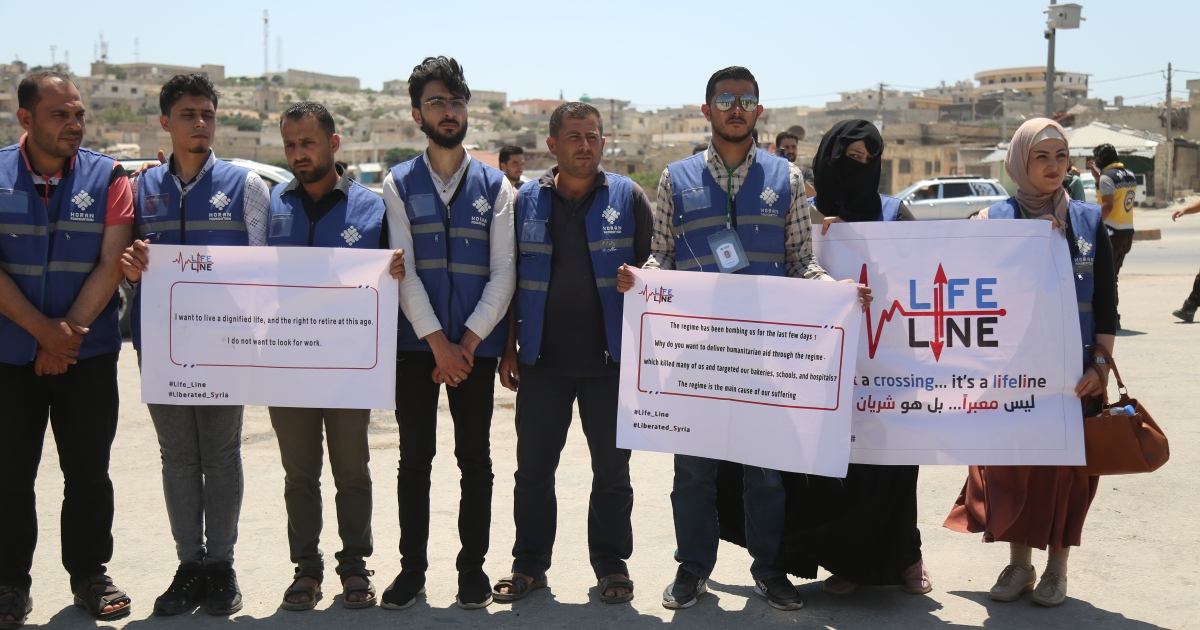 The UN Security Council will vote on whether to keep using the only border crossing available for UN humanitarian aid.

The UNSC is set to vote later on Thursday on whether to extend a cross-border mechanism that allows humanitarian aid to directly enter opposition-held areas of Syria without first going through areas controlled by Syrian President Bashar al-Assad.

Attendees at the sit-in, held near the Bab al-Hawa crossing that links Idlib province with Turkey, said that the mandate that allows UN aid to pass through the crossing had to be renewed, and pointed to the potential risks to civilians in northwestern Syria if that does not happen.

“Russia and the Security Council need to take the right decision when it comes to the future of the Syrian people,” Uday al-Hussain, one of the organisers of the sit-in, told Al Jazeera. “The international community needs to carry out its responsibility and stop the lifesaving humanitarian aid file from turning into a political bazaar in the hands of Russia and its allies.”

Bab al-Hawa is the only crossing that can currently be used for UN humanitarian aid. Four were approved in 2014, but Chinese and Russian vetoes at the Security Council have removed three from the approved list.

Russia has now proposed amendments reducing the year-long mandate renewal to six months, meaning a potential division at the Security Council and the same issue arising again in six months if the Russian amendment is approved.

Moscow has argued that passing aid through the border crossings into opposition territory violates the authority of the Syrian government.

Russia is a key ally of al-Assad and swung the country’s war decisively in his favour when it intervened militarily in 2015.

Participants in the sit-in said that the uncertainty over whether the crossing would remain open would jeopardise the lives of the 4.5 million people who live in northwestern Syria, including approximately 2.5 million internally-displaced people (IDP). 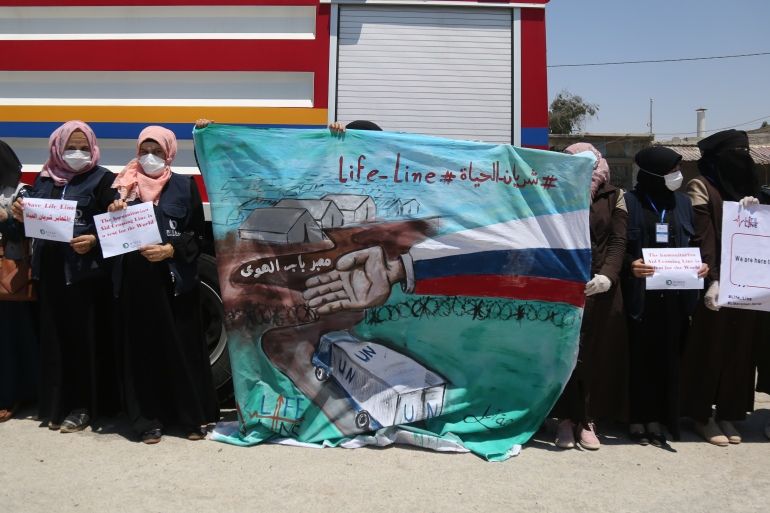 Speaking to Al Jazeera, Raed al-Saleh, the head of the Syria Civil Defence, also known as the White Helmets, said that aid to Syria should not be held hostage by Russia.

“Russia has used its veto 16 times to support the al-Assad regime, and now it is taking advantage of the international abandonment of the Syrian file to limit aid,” said al-Saleh. “Suspending the procedure by which humanitarian aid passes through the border and instead goes through conflict zones, is similar to giving a killer an extra weapon to kill its victim.”

Al-Saleh added: “The al-Assad regime has a dark history of using humanitarian aid as a weapon of war and hunger against the Syrians opposing his ruling; he did it previously in the areas seized by his army, killing the people in Eastern Ghouta, the countryside of northern Homs, Aleppo, and al-Zabadani. He is also doing the same currently in Rukban camp on the Jordanian border.”

Even in comparison with the rest of Syria, which has been going through an economic crisis as a result of the war and the effect of several global factors, such as the Russia-Ukraine war and rising inflation, northwestern Syria stands out.

“The renewal of the resolution is absolutely critical,” said Joe English, UNICEF’s emergency communication specialist. “Many families rely on humanitarian aid to survive, especially people who have been displaced, often multiple times. With 80 percent of those in need of support women and children, the cross-border operations are currently the only lifeline for nearly one million children in the northwest of Syria – children who are among the most vulnerable of the vulnerable.”

The precariousness of the situation, and the reality that access to humanitarian aid is dependent on forces that the opposition has actively fought against is a sobering reality for those living in northwestern Syria, many of whom have been forced out of their homes by the Syrian government forces in the past few years.

“We don’t trust the al-Assad regime and his control over the humanitarian aid file,” Abdul Salam al-Youssef, a Syrian IDP living in northern Idlib, told Al Jazeera. “How could we do so with someone who attacked us with missiles, killed us, and displaced us from our homes?”

“Currently, thousands of trucks filled with aid enter every month,” al-Youssef said. “We are on the verge of famine, what will happen if the aid stops, or if they only allow a few to enter?”