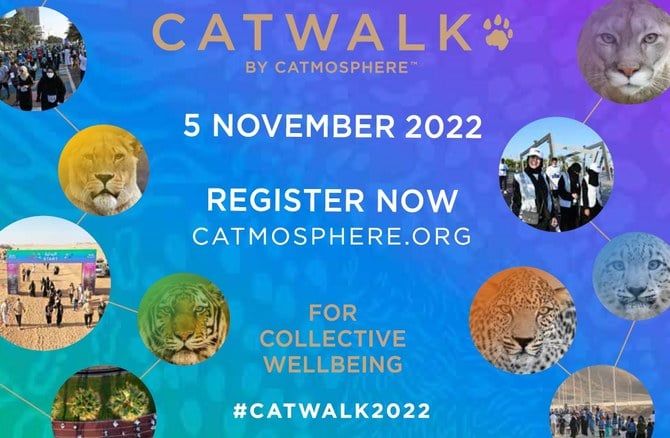 Catmosphere Foundation is launching its second Catwalk on Saturday, building on the success of the 2021 event, which attracted more than 27,000 participants in 102 countries.

In 2021, Catmosphere launched Catwalk and invited people to get active as a way of underlining the need that big cats have for their natural habitats.

By focusing on the way self-care and care for nature are linked, Catwalk also strives to demonstrate how all our wellbeing is interconnected.

Catmosphere’s efforts are supported by partners from both public and private sectors.

Sporting bodies, such as the Saudi Arabian Olympic and Paralympic committees, Saudi Games, and the Saudi Sports for All Federation, have also offered support.

Catmosphere’s founder Princess Reema said: “The many challenges we face globally make it increasingly apparent that the wellbeing of humanity, wildlife and the environments on which we depend are all intrinsically intertwined.

“Catmosphere was founded to highlight these interdependencies, helping to raise awareness for the plight of the big cats and demonstrate how all of our wellbeing is interconnected. We amplify aspects of the concept of One Health, advocated by multiple UN agencies, whose message we wholeheartedly support,” she added.

She said that the inaugural Catwalk in 2021 demonstrated people’s support for conservation efforts directed at big cat species around the world.

“In 2022, we are building on this success, with the public increasingly engaged post-pandemic and with the increasingly apparent effects of climate change highlighting the urgency of the situation. The international profile of Catwalk, supported by inspirational and like-minded partners, is the epitome of our central message that, through collaboration, benefits can be achieved for individuals and the collective,” she said.

Catwalks in the Kingdom are being organized or hosted by a host of entities, including governates, the Ministry of Municipalities, Housing and Rural Affairs, the General Entertainment Authority, King Salman Royal Reserves and King Abdulaziz Royal Reserve, National Center for Wildlife, KACST, Royal Commission for Riyadh City (with a Catwalk in the Diplomatic Quarter), and the Diriyah Gate Development Authority.

Support from multiple Saudi partners means that the public can now register for any of more than 50 organized walks in Saudi Arabia through the website www.halayalla.com/sa-en/tickets/group/catwalk