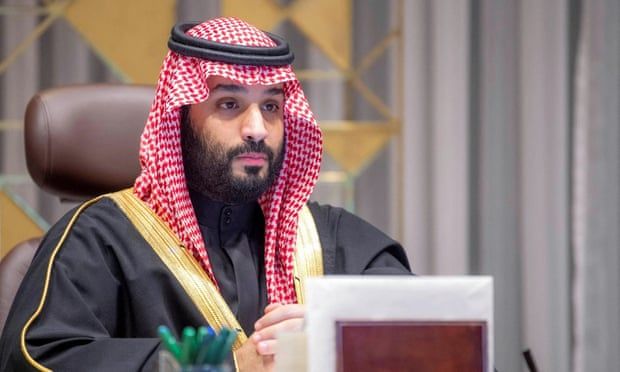 Saudi Arabia appears to be banking on Donald Trump’s return to office by refusing to help the US punish Russia for the Ukraine invasion, and by placing $2bn in a new, untested investment fund run by Trump’s son-in-law Jared Kushner.

In seeking to persuade Riyadh to increase oil production so as to lower prices by as much as 30%, and thereby curb Russian government revenue, the Biden administration is looking for ways to reassure the Saudi government that it is dedicated to the kingdom’s security.

The White House said on Thursday it was an “iron-clad commitment from the president on down”, and the Pentagon is reported to be working on a draft of a new statement of US-Saudi security arrangements, but observers say it is likely to fall short of the firm guarantees the Saudis and other Gulf states are demanding.

The kingdom’s de facto ruler, Mohammed bin Salman, reportedly declined to take a call from Joe Biden last month, showing his displeasure at the administration’s restrictions on arms sales; what he saw as its insufficient response to attacks on Saudi Arabia by Houthi forces in Yemen; its publication of a report into the Saudi regime’s 2018 murder of the dissident and Washington Post columnist Jamal Khashoggi; and Biden’s prior refusal to deal in person with the crown prince.

Instead, Prince Mohammed shows signs of betting on the return to office of Trump in 2024, and the resumption of the Trump administration’s cosy relationship with Riyadh.

There have been calls for an investigation into the huge investment made by the Saudi Public Investment Fund, controlled by Prince Mohammed, in Affinity Partners, a private equity firm set up by Jared Kushner months after he left the White House and his job as special adviser to Trump, his father-in-law.

In doing so, the kingdom’s de facto ruler ignored the warnings of the Saudi fund’s own advisory panel. It worried about Affinity’s inexperience: Kushner was in real estate before his White House stint, and his track record of investments was widely considered not particularly good. It was concerned that the new company’s due diligence on operations was “unsatisfactory in all aspects”, and that it was charging “excessive” fees, according to a report in the New York Times.

“It boils down to something very simple. The Saudis – meaning Mohammed bin Salman – have chosen Trump over Biden, and they’re sticking to their bet,” said Bruce Riedel, a former senior CIA official who is director of the Brookings Institution’s intelligence project.

“It’s not an unreasonable proposition. Trump gave them everything they wanted: complete support in Yemen, support over the killing of Jamal Khashoggi, whatever they wanted in terms of access in the United States.”

John Jenkins, a former UK ambassador to Saudi Arabia said: “I suspect [the crown prince] is betting on the Republicans winning big in the midterms and then regaining the presidency – with or without Trump.”

He added: “He probably thinks Biden is politically weak and he can therefore afford to spite him. That sends a signal not just to the Dems but also to the Republican party. And – judging by the debate raging in DC policy circles on these matters – it’s working.”

The Saudi embassy in Washington did not respond to a request for comment.

Senior Democrats reacted furiously to the revelation of the Saudi investment into Kushner’s fund. Senator Elizabeth Warren called for the justice department to “take a really hard look” at whether the arrangement was illegal. 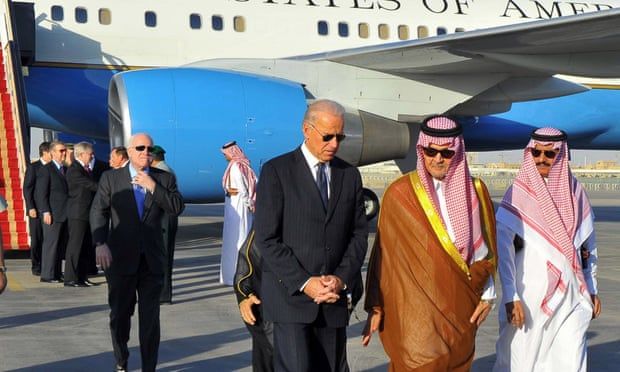 Joe Biden in Riyadh in 2011, following the death of Crown Prince Sultan.

In the first months of the Trump administration, Kushner was instrumental in switching its support from the former crown prince, Mohammed bin Nayef, to the much younger Mohammed bin Salman, with whom the president’s son-in-law had established a rapport largely over the messaging service WhatsApp. After the Khashoggi murder, Kushner was also the crown prince’s staunchest advocate.

As for the Biden administration, there are advocates inside it for placating the Saudi crown prince in pursuit of the overarching objective of bringing down oil prices – for its impact both on Kremlin coffers and on the politically sensitive price at the pump.

“There is a real argument at the moment that you can befriend anyone who isn’t Russia now,” a European diplomat observed. The Pentagon has recently been holding meetings aimed at hammering out a statement on US security arrangements with Saudi Arabia and other Gulf states.

However, Kirsten Fontenrose, former senior director for the Gulf at the national security council, said that whatever the administration comes up with is unlikely to come close to regional demands for security guarantees akin to Nato’s article 5 provisions for mutual defence.

“There’s been this big push for an article 5 by a lot of these countries recently,” said Fontenrose, now a senior fellow at the Atlantic Council. “But there’s not a chance they are going to get it.”

The Pentagon would not comment on its reported work reframing Gulf security arrangements. A spokesman, Army Maj Rob Lodewick, said: “The Department of Defense remains committed to helping advance the security of Saudi Arabia against serious external threats.

“We are doing this through defense cooperation, arms transfers and defense trade, exercises, training and exchanges, alongside engagement on human rights and civilian harm mitigation.”

Even if the administration wanted to offer such guarantees, there is no way such an agreement would gain approval from Congress, where the progressive wing of the Democratic party wants Biden to be tougher on Riyadh, especially in view of its lack of cooperation over oil production and Russia.

“The US continues to provide certain types of equipment. They have announced several arms sales just within the last year. There is logistics support and maintenance,” said Seth Binder, director of advocacy at the Project on Middle East Democracy. “All these things to my mind should be on the table, particularly if this Saudi regime continues to increase this sort of public pressure on the Biden administration.”

Many observers believe, however, that Mohammed is unlikely to be swayed either by wooing or by threats, as the high oil price boosts his budget while he waits for a more amenable administration.

“I don’t see it changing very much. The Saudis have chosen to go with Putin and the oil production level they want, and the world economy is adjusting to that,” Reidel said. “I don’t think there’s much room for manoeuvre for Biden either … I think there are powerful forces against that.”