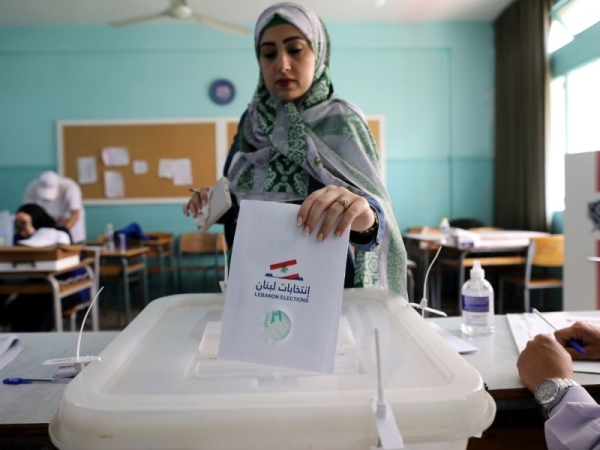 Lebanon's Hezbollah movement and its allies have lost their majority in parliament, results from Sunday's elections show.
The bloc's candidates won 62 of the 128 seats, three fewer than it needed.

But the lack of an outright winner and Lebanon's rigid power-sharing political structure means that the chance of significant change is still low.

The election was the first held since a 2019 nationwide uprising against a political elite widely seen as corrupt and ineffective.

The mass protests were sparked by the start of one of the worst economic depressions the world has seen in more than 150 years. An estimated 80% of Lebanon's population now live in poverty, and there have been severe shortages of food, fuel and medicines.

The country's problems have been compounded by the coronavirus pandemic and a devastating explosion at Beirut's port in 2020, which killed more than 200 people. The investigation into who was responsible has stalled repeatedly, as politicians failed to give evidence.

The Hezbollah-led bloc in parliament — including the Free Patriotic Movement (FPM) and the Shia Amal movement of Speaker Nabih Berri — had 71 seats in the last election in 2018.

Hezbollah and Amal's candidates held on to the 27 seats allocated to Shia Muslims in Sunday's vote, but many longtime allies suffered surprise defeats.

The FPM said on Monday that it had won 16 seats, down from 18 in the outgoing parliament, while the Lebanese Forces (LF) said it had won 20 seats, up from 15, making it the biggest Christian party in the new parliament.

The LF is led by Samir Geagea, who was one of the most feared warlords during the 1975-90 civil war and is a fierce critic of Hezbollah's military power. He has said Lebanon needs a "radical change in power" to solve its problems.

The BBC's Anna Foster in Beirut says the LF's gains might have an impact on the election by MPs later this year of a new president, who has to be a Christian under the sectarian power-sharing system.

The victories of independent candidates and non-aligned parties were also significant, our correspondent adds.

In the central Aley district, the Hezbollah-allied Druze politician Talal Arslan was defeated by the Taqaddom party's Marc Daou, who ran on a reform agenda.

And in the south, a stronghold of Hezbollah, Elias Jradi of the Together Towards Change list, won an Orthodox Christian seat from Assaad Hardan, leader of the Hezbollah-allied Syrian Socialist Nationalist Party.

Prime Minister Najib Mikati urged the newly elected MPs to quickly agree on the make-up of new government, which he hopes to lead, "because what we are passing through cannot withstand bickering at the expense of priorities".

Its priorities will be negotiating a rescue package with the International Monetary Fund and drafting laws to help spark an economic recovery.

Hezbollah will still be hugely influential in the new parliament, but that it might need to do more negotiating and make more compromises to get its own way, according to the BBC correspondent.

Much of the militant group's power comes from outside the political system anyway, she adds, and not much will change in the day-to-day lives of the people living in its strongholds.

For the first time in decades, the elections took place without the country’s largest Sunni party, the Future Movement.

Its leader, former prime minister Saad Hariri, stepped down from politics earlier this year. Some of his supporters endorsed the boycott, while some of his allies quit the party to take part in the elections.

Analysts and some Hariri allies feared that the political vacuum created by Hariri’s departure would allow Hezbollah’s allies to expand their influence in Beirut, Sidon, Tripoli, and other key constituencies.

However, in Beirut’s second district, a key electoral stronghold for Hariri, three opposition candidates broke through.

Ibrahim Mneimeh, an independent who won a Sunni seat in Beirut’s district with the most individual votes, believes that people want a new way of doing politics, and dismissed fears of a “Sunni gap”, as some analysts described.

“Despite the challenging circumstances, the authorities demonstrated their commitment to adhere to the Constitution and honor Lebanon’s democratic traditions,” Guterres said in a statement, in which he also called for the swift formation of a government.

The country’s new parliament will now have to appoint a prime minister-elect and form a new government in order to resume IMF negotiations and enact economic and structural reforms to help the Lebanese economy reemerge after years of tumult.

The parliament will also vote on its speaker, which will likely be Nabil Berri, who has held the role for 30 years, as well as the country’s president in October.
#Coronavirus