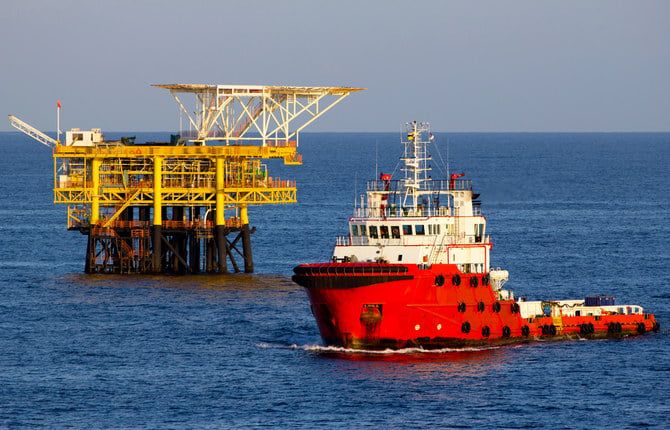 Oil prices dipped in early Asian trade on Monday, but held close to the highest levels since the start of the year on optimism that China’s reopening will lift fuel demand at the world’s top crude importer.
Brent crude fell 61 cents, or 0.72 percent, to $84.67 a barrel by 08.15 a.m. Saudi time, while US West Texas Intermediate crude was at $79.34 a barrel, down 52 cents, or 0.65 percent, amid thin trade during a US public holiday.

Climate activists protested in Davos on Sunday against the role of big oil firms at this week’s World Economic Forum, saying they were hijacking the climate debate.

Major energy firms including BP, Chevron and Saudi Aramco are among the 1,500 business leaders gathering for the annual meeting in the Swiss resort, where global threats including climate change are on the agenda.

“We are demanding concrete and real climate action,” said Nicolas Siegrist, the 26-year-old organizer of the protest who also heads the Young Socialists party in Switzerland.

The annual meeting of global business and political leaders officially opens in Davos on Monday.

“They will be in the same room with state leaders and they will push for their interests,” Siegrist said of the involvement of energy companies at the WEF meeting.

The oil and gas industry has said that it needs to be part of the energy transition as fossil fuels will continue to play a major role in the world’s energy mix as countries shift to low-carbon economies.

More than a hundred protesters gathered in a snowy Davos square chanted, “change your diet for the climate, eat the rich,” while some booed oil firms cited during a speech.

“I know some of the companies are involved in alternatives but I think governments with their subsidies, have to skew the field in favor of alternative energy,” Heather Smith, a member of the 99 percent organization.

Smith was holding a sign saying “Stop Rosebank,” a North Sea oil and gas field she is campaigning to halt plans for.

Rising interest rates have made it harder for renewable energy developments to attract financing, giving traditional players with deep pockets a competitive advantage.

“There is still too much money to be made from fossil fuel investments,” she added.

At least four Chinese-owned supertankers are shipping Russian Urals crude to China, according to trading sources and tracking data, as Moscow seeks vessels for exports after a Group of Seven oil price cap restricted the use of Western cargo services and insurance.

China, the world’s top oil importer, has continued buying Russian oil despite Western sanctions after Russian President Vladimir Putin and Chinese leader Xi Jinping launched what they called a no-limit partnership before the war in Ukraine.

The sources said a fifth supertanker, or very large crude carrier, was shipping crude to India, which like China has continued buying Russian oil sold at a discount as many Western buyers turn to other suppliers.

All five shipments were scheduled between Dec. 22 and Jan. 23, according to the sources and Eikon ship tracking data.

The G7 price cap introduced in December allows countries outside the EU to import seaborne Russian oil but it prohibits shipping, insurance and re-insurance companies from handling Russian crude cargoes unless sold for below the $60 cap.

“With Urals prices well below the price cap, the business of buying and trading Urals is essentially legitimate,” said an executive with a Chinese firm involved in the shipments.

As the US and its allies tried to choke off Moscow’s energy revenues to limit its ability to fund the Ukraine war, Russia quickly diverted oil exports from Europe last year, mainly to Asia.

The longer voyages, heavy discounts and record-high freight rates ate into profits but the use of supertankers on the Asian routes may now cut shipping costs.

The Russian energy and transport ministries declined to comment. China’s Foreign Ministry did not respond to a request for comment, although Beijing has previously called the Western sanctions on Russia illegal.

Indian Oil Minister Hardeep Singh Puri said at a press briefing on Thursday that India would buy oil from wherever it could secure the cheapest price.

Industry sources say Indian refiners are securing a discount of $15-$20 per barrel on Russian oil on a delivered basis compared to Brent.