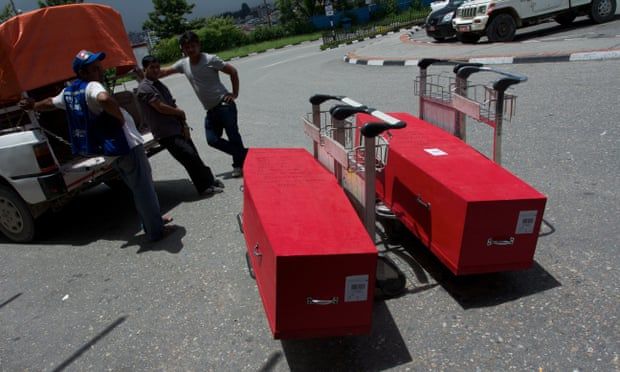 As the 2022 draw takes place in Doha, the Gulf state’s migrant labour force continues to face exploitation
As some of the biggest names in football gather in Doha for today’s World Cup draw, commentators will no doubt point out how much money Qatar has lavished on its preparations for the sporting mega-event.

They will talk of its vast, gas‑fuelled wealth and the $500m (£380m) a week it was at one stage spending on new stadiums, transport links and infrastructure.

But despite the billions spent, Qatar’s World Cup infrastructure has been built on the cheap. Hundreds of thousands of workers have been forced to pay for their own recruitment and labour for years earning poverty wages.

In villages and towns across South Asia and parts of Africa, young men desperate for work sign up with recruitment agents who, often in collusion with companies or brokers in Qatar, illegally extract huge sums from them in return for a job.

It can take a low-wage worker from Bangladesh a year of hard labour just to recoup the fees.

For some the bargain eventually pays off; money is sent home, houses are rebuilt, children sent to better schools and marriage dowries paid. Many workers return to Qatar multiple times, a sign perhaps of a lack of opportunities at home, but also that migration can work.

But for many others, it’s a trap. They find themselves deep in debt, unable to change jobs and on very low wages.

In 2014 I met a worker building the Al Janoub stadium who was earning overtime pay of 45p an hour. In 2016, Amnesty International found scores of workers maintaining the green spaces around the Khalifa stadium earning a basic salary of about 50p an hour. Two years later, the Guardian interviewed a worker at Al Rayyan stadium earning about 60p an hour. And last year I met dozens of workers employed at Fifa-endorsed hotels, earning a basic wage of £1.25 an hour or less.

When the case of low wages at Al Janoub stadium was reported, the local organising committee said it was “working with the contractor to rectify any non-compliance”. At Al Rayyan, the committee said it had rectified the case.

These are not just a handful of extreme examples. When Qatar introduced a basic minimum wage the equivalent of £1 an hour last year, the UN’s International Labour Organization said that more than 400,000 workers would benefit. In other words, close to half a million workers were earning less than that at the time.

That is assuming they get paid at all. Wage theft appears rife in Qatar: we reported on accounts from some of the men who built the offices used by the World Cup organising committee, as well as some of those who have worked on World Cup stadiums. Last month Human Rights Watch highlighted another case involving workers who had not been paid for up to five months.

The Qataris point to labour reforms, announced in 2020, as a sign that things are changing. They also cite the abolition of the much-criticised kafala system, which barred workers from changing jobs, and the introduction of a minimum wage.

Narad Nath Bharadwaj, Nepal’s former ambassador to Qatar, told me that conditions for workers in Qatar are better than in other Gulf states but described the reforms as “symbolic”. He particularly criticised workers’ wages, saying they receive far less than in other countries with similar levels of affluence. “It’s a dire situation when workers are exploited, paid paltry wages, made to work eight to 10 hours a day in the inclement climate,” he said.

Symbolic or not, reforms are not enough. According to the UN’s Guiding Principles on Business and Human Rights, when business-related human rights abuses occur, “states must take appropriate steps to ensure … those affected have access to effective remedy”.

The local World Cup organising committee has taken an important step in that direction by requiring companies with stadium contracts to partly repay the recruitment fees of workers. But these men only ever made up a small fraction of Qatar’s migrant workforce. Hundreds of thousands more have no prospect of repayment.

Even in death, migrant workers often pay their own way. Families of workers who died have told me that the only help they got from Qatar came from their loved ones’ co-workers, who gave up their own money to send a donation, often to help with costly funeral rituals.

The Qatari authorities and Fifa talk a lot about the positive legacy of the World Cup. The local organising committee said: “This tournament is a powerful catalyst for delivering a sustainable human and social legacy ahead of, during and beyond the 2022 Fifa World Cup.”

But a real legacy would be to help ensure compensation for those who have suffered: men like Tilak Bishwakarma. Nine years ago, I met Tilak as he cremated the body of his son, Ganesh, on the banks of a river near his home in western Nepal. Ganesh had died in Qatar just months after arriving.

When I got in touch with him recently, Tilak said the family had received no compensation from his employer. In fact, his son’s death meant they had no way to pay back the loan they took out to pay for his job.

“My heart cries whenever I think about him,” he said. “It was my fate to cremate my son, while it should have been the other way round. Nothing hurts a father more than cremating his son.”

A spokesperson for the Qatar government said: “There are complex challenges that need to be overcome to protect economic migrants globally, including in Europe. For its part, Qatar is committed to eradicating illegal recruitment practices in its labour market and supporting efforts to tackle abuse and exploitation throughout the global economy.”

The spokesperson highlighted a number of initiatives the government has taken to address the payment of recruitment fees, including setting up recruitment centres in major labour-sending countries.

“Companies in Qatar are legally required to compensate the families of all workers who lose their lives in a work-related incident,” the spokesperson added.