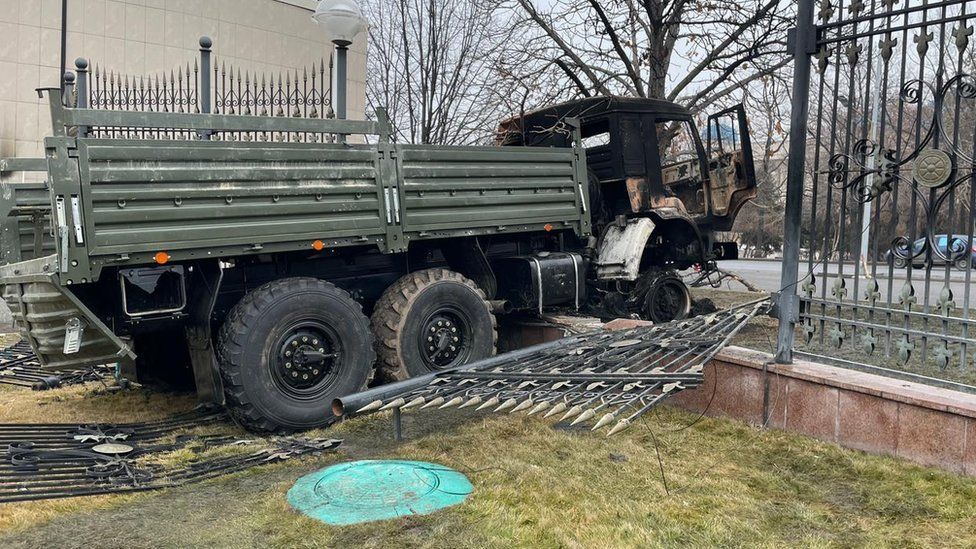 Kazakhstan's biggest city Almaty looks like something from an apocalypse film.

Driving around early on Friday morning, the smell of burnt vehicles was still in the air. Few people were about, many too afraid to come out into the streets.

The army and police are blocking key sites in the city, which has been the focal point of nationwide protests against the government.

When we approached soldiers at the main square they shouted at us and fired warning shots in the air, warning us not to come close.

I've been coming to Almaty for years. It's normally a bustling city, with lots of greenery and places to eat out and drink.

Now though shops and banks have been looted or destroyed. It will take some time for them to recover.

Much of the damage is around the big main square that protesters first went to when the demonstrations began.

Media buildings nearby were attacked and the mayor's office burnt down. It is pitch black now, having been engulfed by black smoke.

We saw no signs of protests on Friday, just a small group of people gathering near the destroyed buildings to take photos on their phones. But we could still hear shooting and explosions, which may have been be stun grenades. When I first arrived I thought there was fog then realised it was more likely to be smoke from the grenades and fireworks.

Several residents I spoke to were shocked and angry. These protests are unprecedented in Kazakhstan, and many here are surprised that they spread and turned violent so quickly.

Some of those I spoke to are glad to see forces arrive from Russia and other neighbouring countries, hopeful they will restore order.

One woman told me the government should have been firmer from the start.

"If they had used force in the very beginning, this unrest wouldn't have happened," she said. "Maybe they were worried about condemnation, that they used weapons but you see now what this approach led to."

But amid the anger at the violence, there was sympathy for the protesters too. Many of the demonstrators come from rural areas, where pay is low and life is tough.

"I understand the demands of the protesters," said one man, a 22-year-old cook. "We can see that our salaries are not growing and most of the population is struggling. But this is now looting and hooliganism, ordinary people are suffering now. It must be stopped."

Almaty residents now face food shortages, with the big supermarkets closed. Shops that are open only take cash, but it is difficult to find somewhere to withdraw money. There's no internet and even getting a taxi seems too risky. 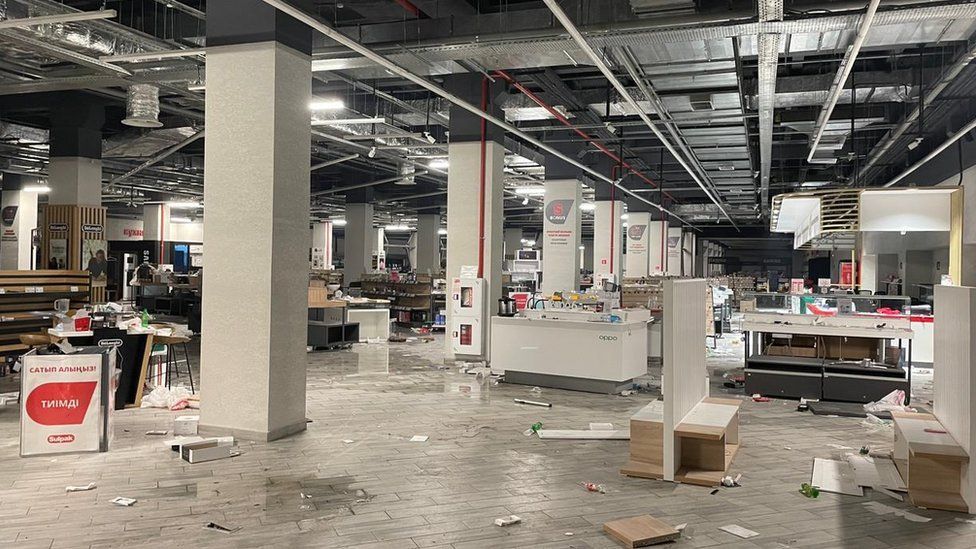 One of the looted shops in Almaty

With the internet hit and phones not working properly, it is hard to find out what's happening outside the city. There are all sorts of rumours being shared that are impossible to check out.

Kazakhstan has never seen protests of this scale. There's been unrest before, but largely localised. None of them resulted in the main airport being attacked.

Plans to raise fuel prices triggered these demonstrations, but there is also widespread discontent about the government.

After the resignation of Kazakhstan's first president, Nursultan Nazarbayev, who held office from independence up to 2019, people hoped the new leader Kassym-Jomart Tokayev would bring change.

These expectations were thwarted. In particular, the renaming of the capital Astana to Nur-Sultan, in honour of the former leader, was proof for many the old is elite is still in charge.

For now, things are calming down and the authorities appear to be in control.

But even if these protests have ended for now, the discontent will remain. Perhaps there will be another spark that fuels new ones.

Where is it? Kazakhstan shares borders with Russia to the north and China to the east. It is a huge country the size of Western Europe.

Why does it matter? A former Soviet republic which is mainly Muslim with a large Russian minority, it has vast mineral resources, with 3% of global oil reserves and important coal and gas sectors.

Why is it making the news? Fuel riots, which have escalated to become broader protests against the government, have resulted in resignations at the top and a bloody crackdown on protesters.

Watch: The BBC's Abdujalil Abdurasulov hears gunfire as he visits the scene of clashes in Almaty