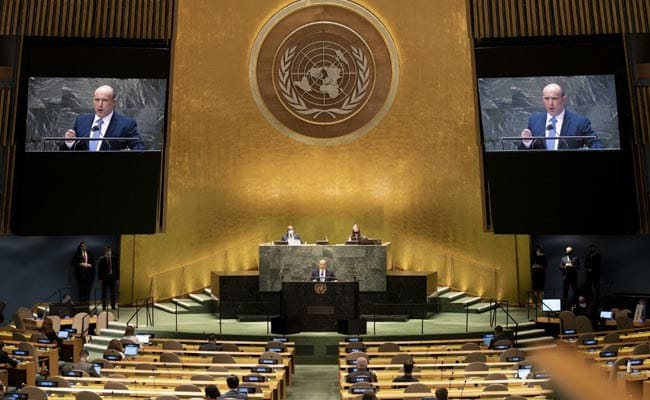 Israeli Prime Minister Naftali Bennett said on Monday that Iran had crossed "all red lines" in its nuclear program and vowed that Israel would not allow Tehran to acquire a nuclear weapon.

In his first speech to the United Nations General Assembly, Bennett said Iran sought to dominate the Middle East under a "nuclear umbrella" and urged a more concerted international effort to halt Iran's nuclear activities.

But he also hinted at the potential for Israel to act on its own against Iran, something it has repeatedly threatened in the past.

"Iran's nuclear program has hit a watershed moment, and so has our tolerance. Words do not stop centrifuges from spinning," Bennett said. "Israel will not allow Iran to acquire a nuclear weapon."

While there was no immediate response from Iran, Bennett, a far-right politician who opposes Palestinian statehood, drew an angry Palestinian reaction after he failed to mention the decades-old Israeli-Palestinian conflict in his speech.

Indirect US-Iran talks in Vienna have stalled as Washington awaits the next move by Iran's new hardline president, Ebrahim Raisi.

Bennett struck a less combative tone at the United Nations than Netanyahu, who often relied on props to dramatize his accusations against Iran, an approach that critics derided as political stunts.

But Bennett has been just as adamant as Netanyahu was in pledging to do whatever is necessary to prevent Iran, which Israel views as an existential threat, from building a nuclear weapon. Iran consistently denies it is seeking a bomb.

"Iran's nuclear weapons program is at a critical point. All red lines have been crossed, inspections ignored," Bennett said. "They're getting away with it."

He called for international action. "If we put our heads to it, if we're serious about stopping it, if we use our resourcefulness, we can prevail," Bennett said.

Biden told Bennett in White House talks in August that he was putting "diplomacy first" with Iran but if negotiations fail he would be prepared to turn to other unspecified options.

Bennett made not a single direct mention of the Palestinians in his remarks, except to accuse Iran of backing anti-Israel militant groups such as Hamas and Islamic Jihad.

Bennett, who sits atop an ideologically diverse coalition, was formerly the leader of the main settler movement in the occupied West Bank.

"Deliberately omitting a reference to Palestine reflects his fear of it, and once again proves to the international community that he is not and will not be a partner for Palestinians in the peace and negotiation process," Palestinian Foreign Minister Riyad al-Maliki told Reuters.

Biden, in his UN speech last week, declared renewed U.S. support for a two-state solution, after Trump distanced himself from that longstanding tenet of U.S. policy, but said Israel and the Palestinians were a long way from achieving it.

Biden's aides are mindful that US pressure for a resumption of long-dormant peace talks could destabilize the fragile Israeli coalition.

Addressing the General Assembly on Friday, Palestinian President Mahmoud Abbas accused Israel of destroying the two-state solution with actions he said could lead Palestinians to demand equal rights within one binational state comprising Israel, the West Bank and Gaza.

Bennett focused instead on Israel's landmark normalization agreements brokered by the Trump administration last year with the United Arab Emirates, Bahrain and Morocco. "More is to come," he said.

Israel has trumpeted its new diplomatic relations as helping to forge a regional bulwark against their shared foe, Iran.

Palestinian officials said they felt betrayed by their Arab brethren for reaching deals with Israel without first demanding progress toward the creation of a Palestinian state.