In the UAE, a Camel Contest Celebrates Desert Culture

In the United Arab Emirates recently, the Al Dhafra Festival brought owners of camels together for a camel beauty contest. The event is among desert traditions that go back generations.

Even as the Omicron version of the coronavirus spreads, camel owners from Bahrain, Kuwait, Oman, Saudi Arabia and Qatar recently traveled to the United Arab Emirates.

They brought with them 40,000 of their most beautiful camels for the Al Dhafra Festival, an event that celebrates desert culture.

Camel beauty is decided based on appearances agreed upon generations ago. Only female camels take part because males fight too much, experts said.

A five-man jury decides the winners.

One of the organizers, Mohammed al-Muhari, described what judges were looking for as hundreds of camels were being shown.

Necks must be long and thin, cheeks wide and hooves large, he told The Associated Press. Lips must hang down. The camels must walk tall.

“It’s not so different from humans,” al-Muhari said.

Some breeders have tried to cheat. They use banned injections to grow the camel’s lips, soften the face and increase the size of the camel’s back.

Festival spokesman Abdel Hadi Saleh would not say how many breeders had been banned over measures to change a camel’s appearance. All camels have detailed medical examinations before entering Al Dhafra Festival.

Since Emirati investigators began using X-rays and other devices a few years ago, Saleh said the number of cheaters has fallen.

“We easily catch them, and they realize getting caught, it’s not worth the cost to their reputation,” he said.

At the main Saudi contest, the most beautiful get high prices. Camels change hands in deals worth millions of dirhams, a local form of money.

But breeders say it is not only about the money.

“It is a kind of our heritage and custom that the (Emirati rulers) revived,” he said. Revive is a term that means to bring back.

Gone are the days when camels were important for daily life in the country.

However, experts say Emiratis are increasingly searching for meaning in the past. This includes Bedouin traditions that were common before the UAE became a nation 50 years ago.

Rima Sabban of the Zayed University in Dubai said, “Younger Emiratis who have identity issues are going back to their heritage to find a sense of belonging.”

Sabban added, “The society developed and modernized so fast it creates a crisis inside.”

Each category in the 10-day contest is divided into two types of camels: Mahaliyat, the tan breed that comes from the UAE and Oman, and Majaheen, the darker breed from Saudi Arabia.

For hours, judges studied each camel, writing lists of the animal’s body parts for scoring purposes. Breeders shouted to surprise camels so they would look up and show off long necks. 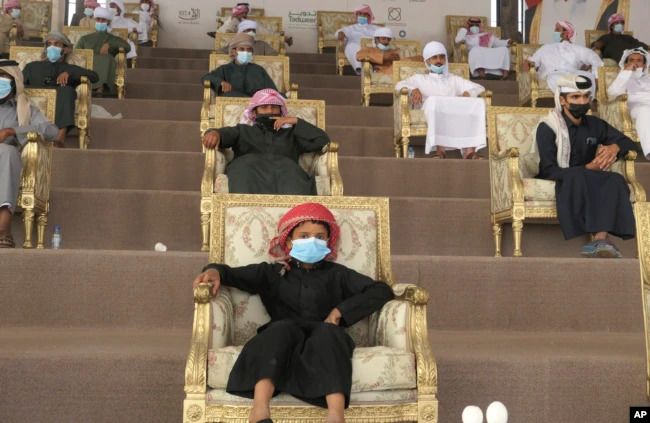 As the sun set over the sands, the winning breeders were called to accept their prizes. Camels were crowned with gold and silver-lined cloth.

After that, he jumped into his vehicle and the victory parade of vehicles and camels disappeared into the desert.