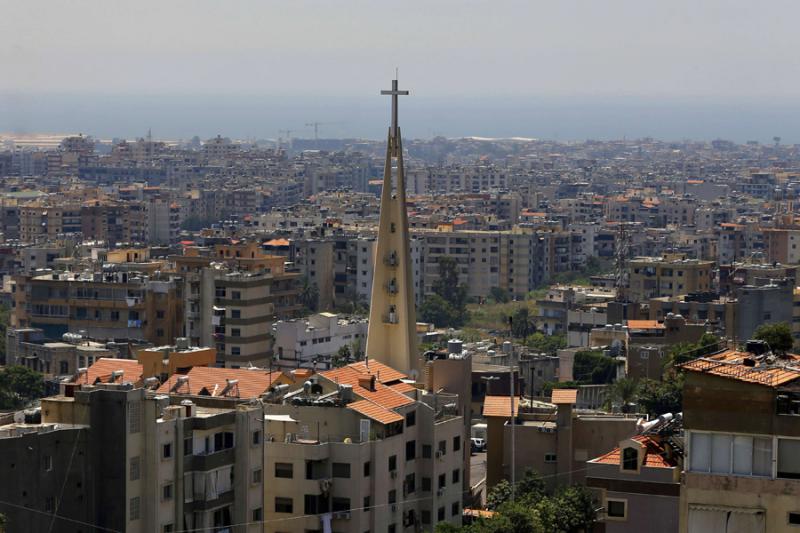 El-Hage, who serves as the Maronite Archbishop of Haifa and Jerusalem (the Holy Land), was detained for eight hours at the General Security headquarters in the southern Lebanese city of Nakoura while returning to the country following a trip to Israel.

He was arrested at the Ras Naqoura border crossing, which is reserved for clerics and the diplomatic corps, and underwent a lengthy interrogation about his relationship with the Lebanese diaspora in Israel, who took refuge there after the Israeli army’s withdrawal in 2000 from the border strip it previously controlled.

According to Lebanese media, El-Hage’s passport and cell phone were confiscated, and he was forbidden to travel. Security forces also confiscated a large quantity of medicines, food items, and canned goods, as well as roughly $460,000 that El-Hage was transporting on behalf of Lebanese nationals in Israel, who wished to send the goods to family members struggling amid Lebanon’s ongoing financial woes.

El-Hage reportedly provided security forces a lengthy list containing hundreds of beneficiaries’ names, each of whom were expecting between $100-$500 from family members in Israel.

Though he was eventually released with the help of the Lebanese Maronite Patriarch, Cardinal Béchara Raï, as well as top judicial authorities, El-Hage was issued a court summons for Wednesday.

After the incident, the Vatican’s envoy to Lebanon, Maltese Archbishop Joseph Spiteri, made comments to a local television station calling El-Hage’s arrest a “dangerous” precedent.

Lebanese politician Samir Geagea, leader of the growing Christian-backed Lebanese Forces party, also weighed in, saying Tuesday that El-Hage’s detainment was “not comprehensible at all.”

“Visiting Maronite monasteries in the Holy Land and looking after their affairs is at the heart of his mission as the Patriarchal Exarch of Jerusalem and Palestine and Jordan,” Geagea said of El-Hage.

The summoning of El-Hage for interrogation at Lebanon’s Military Court “is not based on a certain suspicion, evidence or proof,” he said, asserting the move was more likely intended as “a message to His Eminence Patriarch Beshara al-Rahi based on his patriotic stances.”

For months, Raï has been calling for a neutral head of state as Lebanon struggles to form a government following May’s parliamentary elections and as the country prepares for presidential elections later this year.

He has also increased his criticism of Hezbollah, Lebanon’s Iran-backed Shia Islamist party and militant group, which barely maintained its parliamentary majority in the May elections.

Though Hezbollah did not lose any of its seats, the political allies that helped the party maintain its majority suffered major blows from new and growing anti-establishment opposition, which has risen amid Lebanon’s worsening financial crisis and political paralysis.

Lebanese currency has lost roughly 95 percent of its value since it first started to nosedive in 2019, and around 75-80 percent of the population currently lives in poverty, unable to afford basic necessities, while navigating fuel shortages and power outages, as well as medical shortages.

The crisis was worsened by the Beirut Port explosion in August 2020, which killed more than 200 people and injured at least 4,000 others in one of Lebanon’s worst industrial accidents, which left entire neighborhoods destroyed.

Given the lack of a clear majority, Lebanese parliament has been unable to form a new government, which is problematic for Lebanon’s negotiations with the international community.

Raï has been vocal in his criticism of the new political deadlock, saying in a July 10 homily, “The tactics of the parties, which are again paralyzing the political and institutional life of the country, threaten the resilience of the state, fuel the anger of the people, and expose Lebanon to interference, manipulation and a new subordination to regional and global geopolitical actors.”

This situation, he said, “could deteriorate further if the current stalemate also affects the election of a new head of state,” currently scheduled for October.

If Lebanon is to overcome its political and economic troubles, it needs a president who is “politically committed and experienced, courageous and bold, a statesman who is neutral in its integrity and is guided by its patriotism,” and who knows how to stand “above the alliances between the parties and the dialectics between the opposing political axes,” he said.

Raï also called for the rapid formation of a new government that will prioritize the people and address poverty concerns, and which “does not allow themselves to be influenced by the provocations of Washington, the West, and certain Arab countries.”

Given the role religion plays in Lebanese politics, experts and observers are fearful that the growing political divides and the rise in opposition parties could further complicate the country’s framework of interreligious coexistence.

(According to Lebanon’s 1989 Taif Agreement, the presidency is given to a Maronite Christian, the parliament speaker seat to a Shiite Muslim, the premiership to a Sunni Muslim, and parliamentary seats are divided based on religious affiliation).

After El-Hage’s arrest, Raï convoked an emergency meeting at the Bkirki, the headquarters of the Maronite patriarchate in Lebanon, to discuss the incident.

According to Lebanese news outlet ICI Beyrouth, the Council of Maronite Bishops issued a statement condemning El-Hage’s detainment as a “farce.”

This episode, the council said, “takes us back to previous centuries of occupation during which all the invaders who succeeded one another tried to put an end to the role of the Maronite Church which planted in these regions the spirit of freedom and resistance to oppression, as well as the notion of defending human rights, freedom of conscience and brotherhood among religions.”

They called for his case to be closed immediately and for his possessions and the goods he was transporting to be returned, so they can be allocated to the beneficiaries as intended. The council also asked that the judge responsible for El-Hage’s detainment be investigated and dismissed.

The council insisted that the Maronite patriarchate “will not allow itself to be discouraged by any pressure,” and it called on Lebanese state leaders “to preserve the dignity and rights of all Lebanese and to put an end to the injustice they suffer, whether they reside on Lebanese territory, abroad, or have been forcibly expelled.”