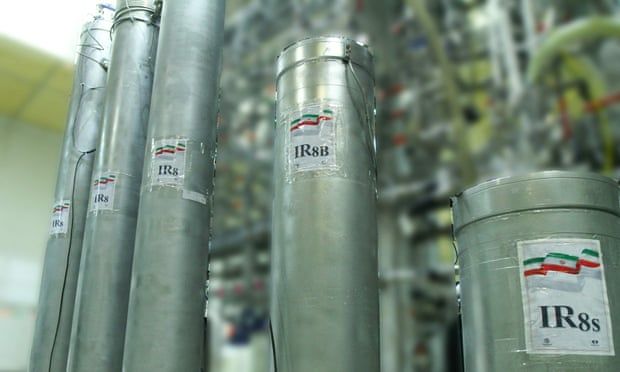 West to rebuke Iran over lack of cooperation with nuclear watchdog

Europe and the US will rebuke Iran this week for failing to cooperate with the UN nuclear inspectorate, a move that has angered Iran’s leadership and may deepen the impasse over talks to bring the US back into the 2015 nuclear agreement, and the lifting of sanctions on Tehran.

The rebuke, in the form of a motion to be voted on at a board meeting of the International Atomic Energy Agency (IAEA) in Vienna, will not lead to Iran’s non-compliance being referred to the UN security council, nor to an extension of sanctions on Iran.

But it reflects growing anxiety that Iran is not providing the cooperation IAEA inspectors need to declare its nuclear programme is peaceful. Iran has progressively reduced the IAEA’s access in what it says is a graduated and reversible response to US sanctions.

In a joint statement to the board, the three European signatories to the nuclear deal – the UK, France and Germany – also condemn Iran’s broader attitude to non-proliferation, saying: “Iran’s nuclear programme is now more advanced than at any point in the past,” and adding that Iran’s accumulation of enriched uranium has no “credible civilian justification”.

The three countries say: “Iran’s nuclear advances are not only dangerous and illegal, they risk unravelling the deal that we have so carefully crafted together to restore the nuclear deal. The more Iran is advancing and accumulating knowledge with irreversible consequences, the more difficult it is to come back to the deal.”

They add: “Neither the IAEA nor the international community know how many centrifuges Iran has in its inventory, how many were built where they are located precisely at the point it is expanding its programme and component manufacturing and centrifuge assembling capabilities.”

On Wednesday, Iran disconnected some of the UN watchdog’s cameras monitoring its nuclear sites, its atomic energy agency said.

The motion to the board, separate from the joint statement, is seen by the west as the minimum necessary to maintain the credibility of the nuclear inspectorate after its director general, Rafael Grossi, reported that his inspectorate had not been receiving the required cooperation from Iran.

Grossi said Iran had not provided technically credible explanations about the presence of uranium particles at three undeclared sites, two years after the IAEA board adopted a resolution expressing serious concern about Iranian stonewalling.

The new motion does not set a deadline for Iranian cooperation, and is relatively mildly worded, partly to ensure it secures the required two-thirds majority of the 35-member board.

But Russian diplomats have joined Iran in criticising the motion, and said they will not be associated with it. China is likely to express opposition as well. Iran has not been specific about how it will respond.

With the separate talks in Vienna about the US rejoining the 2015 nuclear agreement on life support, a motion at the IAEA board criticising Iran’s bona fides may make an agreement even more elusive. Negotiations on a new nuclear agreement began in April 2021 and the last round finished in March.

Throughout the talks in Vienna the US delegation has been negotiating indirectly with Iran, but the talks have stalled over the US refusal to lift its designation of Iran’s Revolutionary Guards as a terrorist organisation. In Washington, opposition to the Biden administration rejoining the agreement has been growing. Iran is also dubious about guarantees that US sanctions will be lifted.

Iran claims Grossi, an experienced diplomat, is dancing to Israel’s tune by criticising the level of Iranian disclosures at the three sites, saying the information on which he is acting has been provided by Israel. Grossi visited Israel and not Iran before the board of governors meeting, as he did on the eve of the last two meetings, which some viewed as a sign that the agency was preparing to escalate its position towards Iran.

Grossi has used his visits to Tehran to extract last-minute commitments that IAEA cameras will remain operating at Iran’s nuclear sites, and the footage, although not currently accessible to the IAEA, would be kept on memory cards.

Grossi denied he had wanted to send a political message through his visit to Tel Aviv and his meeting with the Israeli prime minister, Naftali Bennett.

At a press conference this week, Grossi said the impasse would be a “reminder for Iran, and for us, and for everybody, that we really need to get down to work and clarify these issues that have been outstanding for too long”.

The IAEA signed an agreement with Iran last March in which Tehran pledged to provide answers to the agency to questions related to the inspectors’ finding of uranium traces at secret sites.