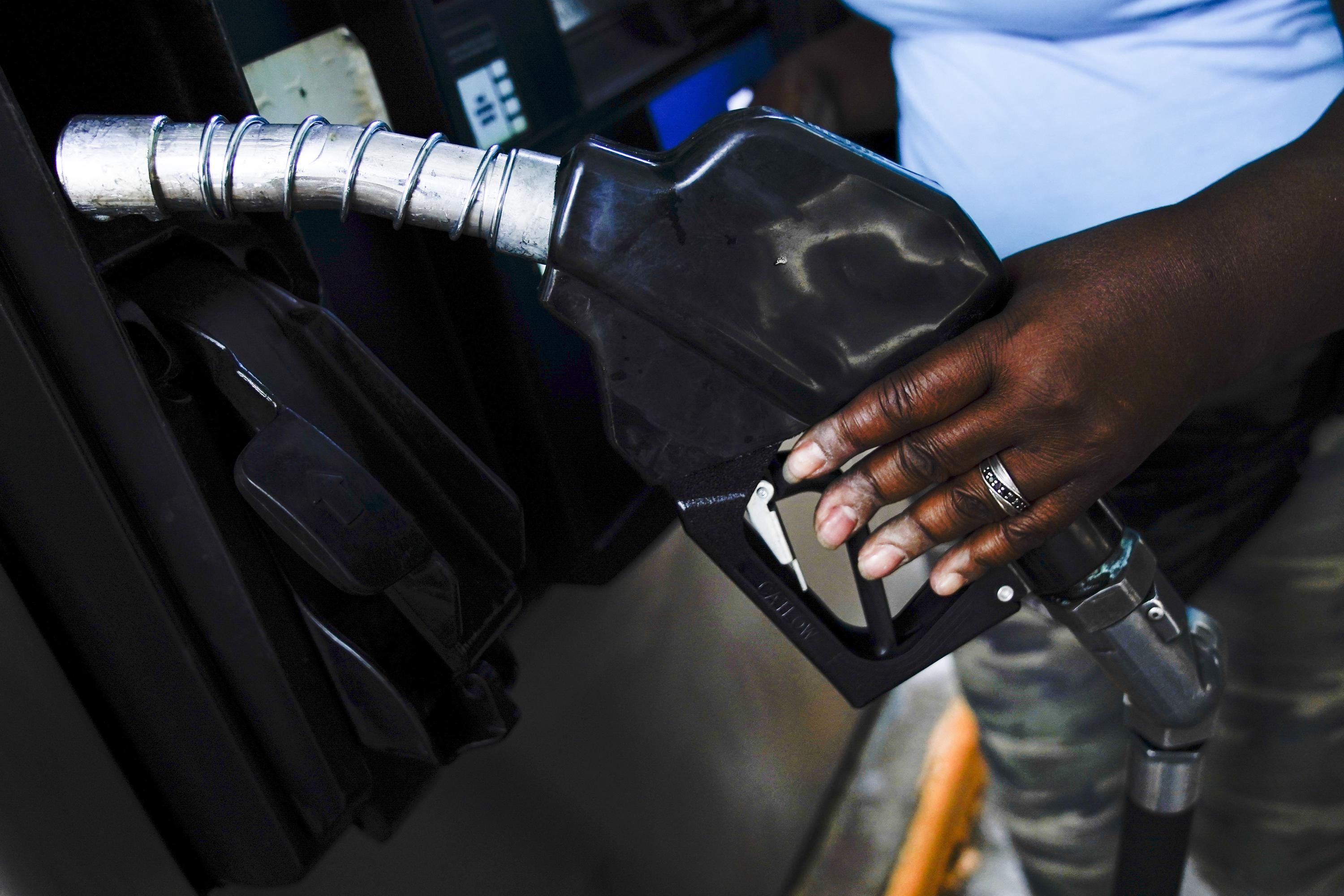 US inflation surges again in June, raising risks for economy

U.S. inflation surged to a new four-decade high in June because of rising prices for gas, food and rent, squeezing household budgets and pressuring the Federal Reserve to raise interest rates aggressively -- trends that raise the risk of a recession.

The government’s consumer price index soared 9.1% over the past year, the biggest yearly increase since 1981, with nearly half of the increase due to higher energy costs. 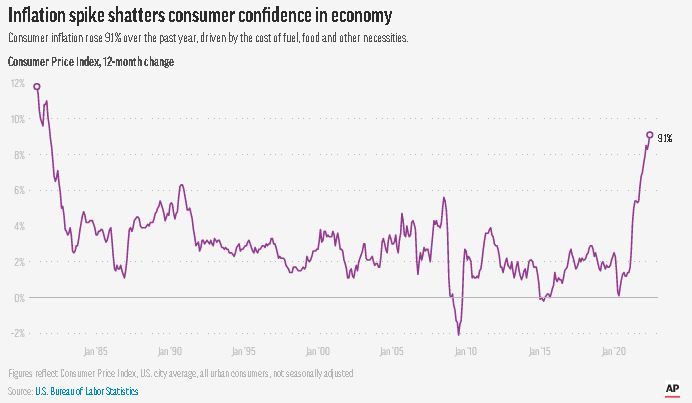 Lower-income and Black and Hispanic American have been hit especially hard, since a disproportionate share of their income goes toward essentials such as transportation, housing and food. But with the cost of many goods and services rising faster than average incomes, a vast majority of Americans are feeling the pinch in their daily routines.

For 72-year-old Marcia Freeman, who is retired and lives off of a pension, there is no escape from rising expenses.

“Everything goes up, including cheaper items like store brands,” said Freeman, who visited a food bank near Atlanta this week to try and gain control of her grocery costs. Grocery prices have jumped 12% in the past year, the steepest climb since 1979.

Accelerating inflation is a vexing problem for the Federal Reserve, too. The Fed is already engaged in the fastest series of interest rate hikes in three decades, which it hopes will cool inflation by tamping down borrowing and spending by consumers and businesses.

The U.S. economy shrank in the first three months of the year, and many analysts believe the trend continued in the second quarter.

“The Fed’s rate hikes are doing what they are supposed to do, which is kill off demand,” said Megan Greene, global chief economist at the Kroll Institute. “The trick is if they kill off too much and we get a recession.”

The likelihood of larger rate hikes this year pushed stock indexes lower in afternoon trading. The central bank is expected to raise its key short-term rate later this month by a hefty three-quarters of a point, as it did last month.

As consumers’ confidence in the economy declines, so have President Joe Biden’s approval ratings, posing a major political threat to Democrats in the November congressional elections. Forty percent of adults said in a June AP-NORC poll that they thought tackling inflation should be a top government priority this year, up from just 14% who said so in December.

After years of low prices, a swift rebound from the 2020 pandemic recession — combined with supply-chain snags — ignited inflation.

Consumers unleashed a wave of pent-up spending, spurred by vast federal aid, ultra-low borrowing costs and savings they had built up while hunkering down. As home-bound Americans spent heavily on furniture, appliances and exercise equipment, factories and shipping companies struggled to keep up and prices for goods soared. Russia’s war against Ukraine further magnified energy and food prices.

In recent months, as COVID fears have receded, consumer spending has gradually shifted away from goods and toward services. Yet rather than pulling down inflation by reducing goods prices, the cost of furniture, cars, and other items has kept rising, while restaurant costs, rents and other services are also getting more expensive.

The year-over-year leap in consumer prices last month followed an 8.6% annual jump in May. From May to June, prices rose 1.3%, following a 1% increase from April to May.

Some economists believe inflation might be reaching a short-term peak. Gas prices, for example, have fallen from the eye-watering $5 a gallon reached in mid-June to an average of $4.63 nationwide Wednesday — still far higher than a year ago.

Shipping costs and commodity prices have also begun to fall, and pay increases have slowed. Surveys show that Americans’ expectations for inflation over the long run have eased — a trend that often points to more moderate price increases over time.

The latest disappointing data on inflation came out at the outset of Biden’s trip to the Middle East, where he will meet with officials from Saudi Arabia to discuss oil prices, among other subjects.

There have been signs that inflation was slowing before — last summer, and in April of this year — only for it to surge again in subsequent months.

“There may be some relief in the July numbers — commodity prices have come off the boil, at least — but we are a very, very long way from inflation normalizing, and there is no tangible sign of downward momentum,” said Eric Winograd, an economist at asset manager AllianceBernstein.

For now, the relentless pace of price increases is frustrating many Americans.

Delores Bledsoe, a truck driver hauling freight from Carlisle, Pennsylvania to Wisconsin on Wednesday, said her fuel costs have tripled. “It’s making me want to get out of the truck and go drive an Uber,” said Bledsoe, who lives in Houston. “It’s depressing.”

Some people are placing blame on companies for using inflation as a cover to raise prices beyond the amount they need to cover their own higher costs.

“I feel the inflation pain every day,” Susana Hazard said this week outside a grocery store in New York City. “Every day, everything is going up and up, more than inflation — they’re price-adjusting. Because even if inflation doesn’t happen, they’ve raised the prices.”

Most economists say corporate price gouging is, at most, one of many causes of runaway inflation and not the primary one.

Housing and rental costs are rising steadily as solid job gains encourage more Americans to move out on their own. Rents have risen 5.8% compared with a year ago, the most since 1986. And the cost of decorating homes is still increasing at a rapid pace — furniture prices are up 13% from a year ago — even as retailers such as Walmart and Target experience rising inventories, which should help lower prices.

The biggest shock has been energy prices, which soared 7.5% just from May to June. Gas prices have skyrocketed nearly 60% compared with a year ago.

Excluding the volatile food and energy categories, so-called core prices rose 0.7% from May to June, the biggest such spike in a year. Core prices jumped 5.9% from a year ago.

Inflation is surging well beyond the United States, with 71 million people pushed into poverty in the three months after Russia invaded Ukraine, the U.N. Development Program said last week.

The war’s economic damage has been especially severe in Europe, with its reliance on Russian oil and natural gas squeezing businesses and consumers with sharply higher bills for utilities, groceries, gasoline and more. Inflation reached decades-high levels of 8.6% last month in the 19 countries that use the euro currency and 9.1% in the United Kingdom in May.