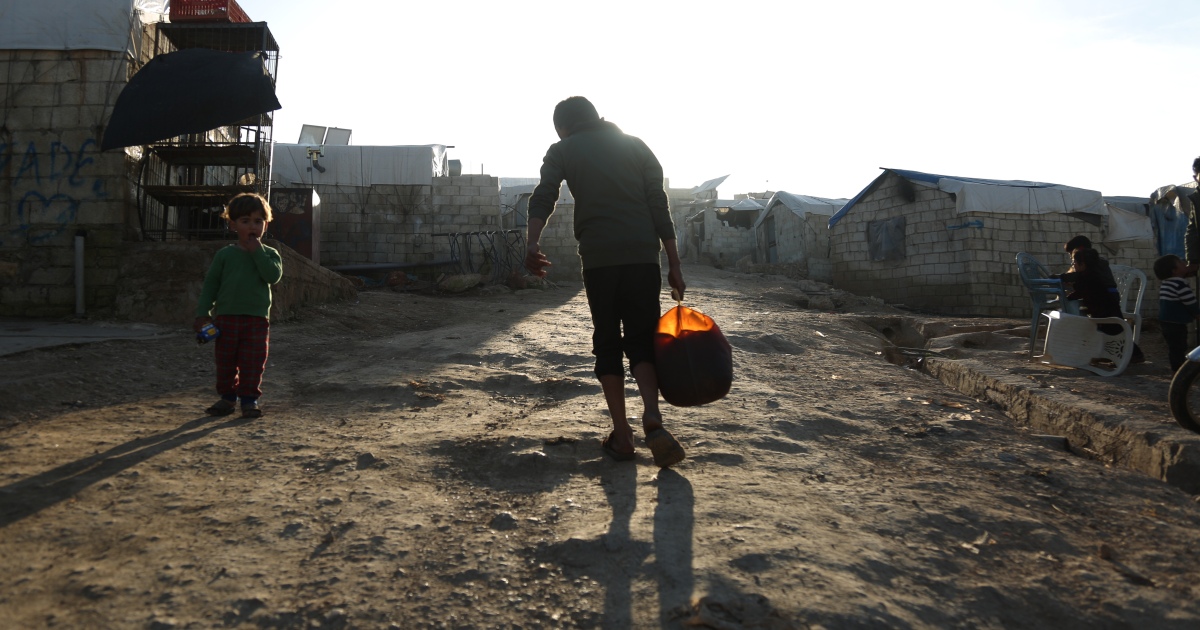 Smugglers say they have no other option but to engage in the illegal trade to feed their families, risking their lives during a Hay’et Tahrir al-Sham crackdown.

Om Omar once worked in a government office before the Syrian uprising turned civil war in 2011. But today, she smuggles fuel to feed her five children and husband in Idlib governorate.

She brings in up to 40 litres (10.5 gallons) of diesel from northern Aleppo province to Atmeh in Idlib almost every day.

With her two eldest children by her side, she sneaks past former al-Qaeda-affiliated Hay’et Tahrir al-Sham (HTS) guards through a one kilometre-long, three metres-deep trench near vast olive groves to cross from Idlib into territory under the Turkish-backed Syrian Interim Government.

It’s a walk she dreads every single day.

Om Omar often struggles to carefully reach the trench and cross safely. The bottom of the trench is covered with rocks, and some people even fall in and injure themselves.

“I once fell in and broke both my legs when the border guards were chasing us,” Mohammad, a construction worker who started smuggling fuel last January, told Al Jazeera. “Then they took the 40 litres of fuel I was carrying and burned it right before my eyes.”

Once Om Omar crosses the de facto border, she buys fuel further north at a cheaper rate than back in Idlib. After snaking through HTS guard positions to reach home, she sells her stock to merchants for a meager profit: about 20 Turkish liras (US$2).

The smugglers who make it back stand in long lines to sell their diesel to merchants. Children often help lug heavy jugs of fuel with their parents.

“It doesn’t get you much when a loaf of bread is up to five liras [25 cents] and you have five children,” Om Omar said. “My husband is ill at home and has nerve damage in both his legs so he can’t move much or work at all.” 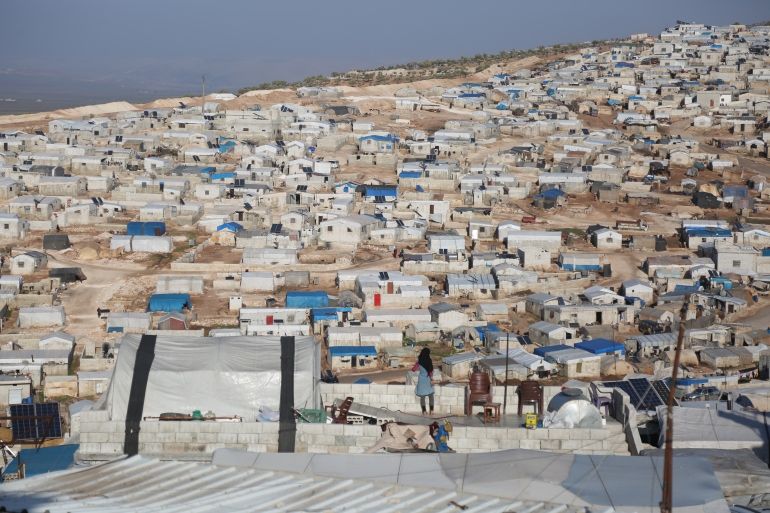 Fuel is cheaper in northern Aleppo, where there are several importers and distributors in the market

Ninety-seven percent of the population in Idlib and across northwestern Syria live in extreme poverty, earning less than $2 a day and relying on humanitarian aid to survive. Living conditions since last winter have especially worsened because of ongoing donor fatigue and the spiralling crisis with the Turkish lira, the opposition enclave’s adopted currency.

HTS is outraged by fuel smuggling, despite its minuscule financial return. It compromises, although slightly, HTS’s monopoly over industries across the province. These monopolies and tax collection are key sources of the armed group’s revenue.

But fuel in northern Aleppo is cheaper, with several importers and distributors in the market, whereas HTS prices it at higher rates.

“The sector is fully regulated, and Hay’et Tahrir al-Sham have got their hands all over it,” Karam Shaar, research director at the Operations & Policy Center and Syria programme manager at the Observatory of Political and Economic Networks, told Al Jazeera.

The affiliated monopoly company is called Watad, and HTS is keen to stop anything that could disturb its revenue flow. It reportedly made a monthly net profit of about $1.67m in 2019.

With that said, Om Omar’s work has become death defying.

In February, HTS forces apprehended single mother of four Fatima al-Hamid, 28, as she tried to smuggle fuel into Idlib. They shot her in the head in front of her children, also wounding her 15-year-old son, according to local media. The border guards left her bloodied on the floor and bystanders rushed her to the hospital, where she eventually died. 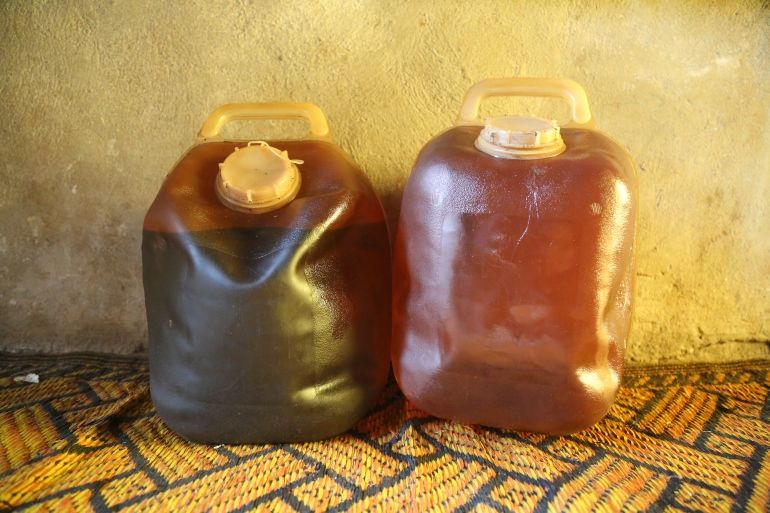 With the small profit margins, smugglers say they can barely make ends meet

Om Omar was at home that day. “I felt horrible for her and her family,” she said. “If she wasn’t in need of an income and didn’t have children to raise, she wouldn’t have decided to work such a job.”

Mohammad recalled a time HTS apprehended him. “I remember once we were returning and the guards saw us and started firing warning shots,” he said. “They slapped a woman and she nearly fell into the trench and burned our diesel. I now lost all my capital, and I’m already in debt.”

He said hundreds of smugglers are staying home following the crackdown, fearing losing their fuel stocks and going deeper into debt – or getting killed.

Om Omar admitted the journey terrifies her. “It’s constant fear and horror,” she said. “When we hear gunshots we have to drop to the ground, and the children get scared.”

Analysts say HTS controls almost all of Idlib’s industry and border crossings through its members or by taking a stake. That way, it sets the prices of goods and services at a rate that is preferable to the group.

Watad and the prices of fuel are clear-cut examples of this.

“If Watad didn’t have the monopoly that Hay’et Tahrir al-Sham enforced, people would have easily been able to increase supply in the market, therefore reducing the prices,” Haid Haid, senior consulting associate fellow at Chatham House, told Al Jazeera. “But they [HTS] want prices to stay this way, so they can maximise revenue and increase tax collection.”

Residents told Al Jazeera that HTS has not responded kindly to families buying goods for personal use from northern Aleppo, when inspecting their vehicles through the formal crossing.

“If someone was coming back to Idlib from Afrin and brought tobacco or even baby formula for personal use, they will try to tax them or confiscate them,” said one Idlib resident on condition of anonymity for safety reasons.

“We’re with them conducting security searches to protect our area from attacks or from drugs, but not cracking down on activists or for economic reasons.”

Meanwhile, Om Omar tends to her children back home after an exhausting day. Money is tighter than usual because she was caught. The guards recently took her fuel and burned it in front of her.

“Why would they do this to us? Just try to feel for us,” she said. “We have children and we’re trying to survive.” 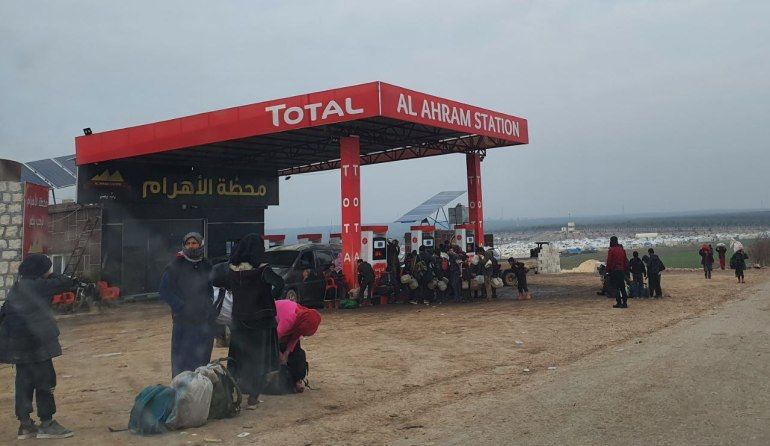 Ninety-seven percent of the population in Idlib and across northwestern Syria live in extreme poverty, earning less than $2 a day and relying on humanitarian aid to survive