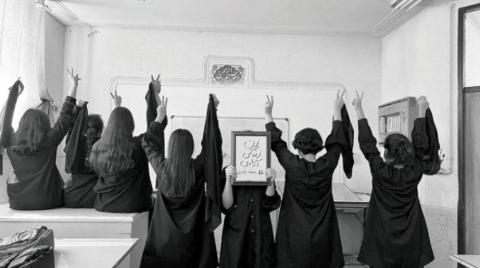 The Iranian Feminist Movement... Why and How?

In September, a girl named Mahsa was murdered by government agents. Her death was like throwing a lit match into a petrol tank. People took to the streets in more than a hundred Iranian cities and demanded the overthrow of the Islamic Republic.
Did all the protesters know Mahsa? No, she was not a well-known figure for her murder to cause such outrage.

The people’s anger was triggered by the many demands that had not been met for years. Their needs had been met with imprisonment and bullets. In the past three decades, some have been calling for reforms within the government, but since demands have gone unachieved, they uniformly chose to try overthrowing the regime this time.

The Origins of the Movement

Iranian women were the pioneers of this movement. Their discontent with the government began in the first month of the revolution when Khomeini ordered making the hijab compulsory - although the implementation of the mandatory hijab took nearly a year, it formed the seeds of the feminist movement in 2022.

In the early years of the revolution, women were alone. Civil society, parties, political groups, and men did not join them. The passage of time, however, has proven that oppression and discrimination in society are like a “virus.” If it is not fought at the beginning, it will infect others.

Massive embezzlement, partisan gangs, discrimination against ethnic and religious minorities, strict censorship, lack of freedom of expression, rampant human rights violations, and a huge class gap made Iranian men realize their mistake and motivated them to make up for ignoring gender discrimination…This time, like a few years ago, Iranian men stood with women and strengthened the voice of the movement.

Large-scale protests that took place in Iran in the past 43 years were mainly “demand protests.” In 2009, Iranians protested fraud in presidential elections. At least 130 people were killed, and several people were executed.

Protests also erupted in 2019 over a hike in petrol prices. Those demonstrations resulted in the death of at least 1,500 people.

But this time around, the people’s demands are different than ever before. They are targeting the basis of government and demanding the overthrow of an oppressive regime.

Previous protests did not last more than a week as they were silenced by government repression. Discontented people left the streets and returned to their homes.

The style of people’s protests in Iran has changed. In contrast to the past, people did not gather in one place or one city. Rather, they took to the streets on a large scale and dispersed in different places, protesting and chanting slogans.

This called for repressive forces to be sent everywhere. As a result, the troops became weak and exhausted, forcing the government to recruit several outworkers in exchange for payments.

Similarities between previous protests and demonstrations now included people not having a single demand and not resisting oppression uniformly.

This time, however, under the guidance of Iranian legal experts, protesters are using the “right of self-defense” to fend off the onslaught of the oppressive forces.

Nevertheless, people are not armed. They continue to hit and run with sticks and stones only. As a result, several members of the suppression force were injured.

Moreover, if security officers wanted to arrest a protester, other demonstrators would attack authorities to prevent the detention of their comrades. Therefore, most arrests take place past midnight or by storming the houses of demonstrators.

The Outcomes of the 2022 Protests?

The September 2022 protests are the “beginning” of the “end” of the Islamic Republic and will lead to the fall of the regime in Iran. But let us not forget that the “fall” is a process that must take its course.

For this reason, protests are normal to fade on some days and be more severe and accelerate on others. However, the situation will undoubtedly return to normal once the regime is overthrown.

What is important is what kind of government the people want after the regime’s fall. People’s desires can be well understood from the slogans they choose. The demonstrators chanted with one heart and one voice, “Woman, Life, Freedom.”

This motto has two sides: its negative side is the denial of the religious tyranny ruling Iran.

In Iran, authorities believe their own interpretation of religion and do not tolerate any other method or religion. Rather, it is the enemy of “freedom of religion and belief.” On this basis, it interferes with all people’s personal and family affairs and even with their way of worship. Many have been arrested or executed for this reason.

The positive aspect of the slogan is that it calls for the establishment of a democratic and secular state. Only in such a government can the slogan “Woman, Life, Freedom” be realized.

In such a state, there is no discrimination because the people decide their own destiny through the free election of representatives. No one is punished for their religious beliefs, and there is no vast difference in class division.

Women will have an equal share of freedom as men, and the human dignity of all will be recognized.

The Price of Reaching Dreamland

The Iranian people know that freedom and democracy have a price. These principles will only be achieved if the nation is willing to pay the price, and the Iranian people have shown that they can bear the cost of democracy.

Over the past 43 years, many Iranian people have lost their lives for opposing the rulers.

The death toll in multiple protests is unknown. Because the government never releases statistics. Statistics are made public only through informing the families, and after verification by human rights institutions.

In recent protests, at least 510 people have been killed by the regime, at least 68 of them minors, prompting UNICEF, on November 8, to protest this unbridled violence.

The exact number of those arrested is also unknown, but I firmly declare that more than 19,000 people have been arrested. At least 300 of them are high school students.

Due to overcrowded prisons and the lack of available space, the detainees are kept in unsanitary and irregular conditions in barracks and government buildings that have been vacated for this purpose.

So far, the trial of several detainees has begun, and 18 people have been sentenced to death, and two of them have been executed.

One of the people on death row is Hamid Ghareh Hassanlou, a well-known physician who built several schools in deprived areas and served in the Iran-Iraq war for six years.

Hassanlou was arrested at his home and tortured to the point where his rib bone was broken. Because he was not treated in time, his lung was punctured.

At the hospital, he was informed that the death sentence had been issued against him. This doctor’s wife, a radiologist, was sentenced to 25 years in prison. Another person was arrested and sentenced to death for singing some rap songs.

Government violence has even spilled over into hospitals, where government officials identify and detain injured people at protest rallies. If the medical staff resists, they are arrested as well.

In one case, tear gas was fired in the hospital yard.

On December 17, the body of a young female doctor named Aida was found. Traces of torture were visible on her corpse.

According to her friends and colleagues, she used to go to their homes and treat wounded people who did not want to go to medical facilities. Now it is widely believed, given the government’s record, that she was tortured and then killed by government agents.

All this is a small summary of the suffering of my bereaved country. The important point is that we all believe in the light that we will reach at the end of the tunnel of terror of the Islamic Republic, and then we will live with our neighbors in kindness and tranquility.