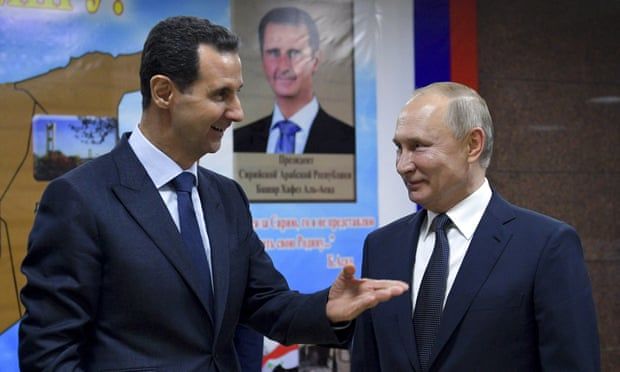 Analysis: Safe in his palace, Syrian leader appears to have given Moscow carte blanche to airlift his army
After 11 years of war, the destruction of towns, cities and much of the Syrian military, Bashar al-Assad’s army has launched a recruitment drive. But the recruits are not fresh from bootcamps and will not fight on the home front. They are the vanguard of what could be the biggest state-backed mercenary force in the world. Within days, Syrian troops could be deployed to reinforce the stalled Russian frontlines in Ukraine, where Vladimir Putin is about to extract a lethal price for Moscow’s rescue of the Syrian leader.

The first Syrian troops to join Putin’s ranks – an advance force of 150 – arrived in Russia on Thursday, European intelligence officials claim. Ukrainian military intelligence, echoing a claim by the Syrian Observatory for Human Rights, believes 40,000 Syrians have signed up to fight – a figure that would represent a sizeable chunk of the battle-ready capacity of the country’s entire military.

In the economic wasteland of post-war Syria, the best – and maybe only – state-backed job on offer is one that those who sign on for might not come home from. The vast majority of newly enlisted Syrian mercenaries are trading in salaries of $15 a month for monthly deals worth between $600 and $3,000. Rank and experience in the gruelling decade of insurrection attracts the higher dollars, but even the basic salary is luring recruits who have few ways out of overwhelming poverty.

Syrians have shown a readiness to sign up at least 14 recruitment centres across the country, in Aleppo, Damascus, Deir Azzour, Homs and Hama, as well as Raqqa, which less than five years ago was at the centre of the war against Islamic State.

“They have been arriving in the dozens to the regime base in Raqqa,” said a Kurdish fighter with the Syrian Democratic Forces in north-east Syria. “We can see them turn up. The Russians have also asked [Kurdish groups] to join them, but I don’t know of anyone who has done so yet.”

In western Syria, some of the regime’s most prestigious units claim to have signed up thousands from their ranks. The Fifth Division, which was trained by Moscow, the 4th Division, which is loyal to Assad’s brother, Maher, and the Tiger Forces, which played prominent roles in the war, are all central to the recruitment push, which will seriously stretch their already depleted ranks and potentially turn Assad’s ragtag army into the largest mercenary force in Ukraine.

Comparatively safe in his palace thanks to Russian backing, and in the debt of Putin if he wants to remain there, Assad appears to have given Moscow carte blanche to airlift his army, and his commanders free rein to enlist them. The vulnerable state that leaves his forces at home seems secondary to returning a favour that the Syrian leader has no other way to honour.

Ukrainian officials say the mercenary force will fly from the Khmeimim base on daily military transport flights. Militia groups that had fought alongside them are also joining the recruitment drive, with Palestinians, National Defence Front troops, the Ba’ath party and even some members of Shia militia groups that fought in Syria under Iran’s auspices joining in.

Pro-regime militia groups have been trained and backed by Russian units since late 2015, when Putin formally intervened to save Assad. At that point, the Iranian general Qassem Suleimani had convinced Putin that Assad was only weeks away from losing the Alawite heartland of western Syria to opposition groups who had decimated his armoured units with precision-guided missiles smuggled across the Turkish border by the CIA.

Ever since, Putin has established a tutelage over Assad and, during visits to Syria, has rarely wasted an opportunity to assert his dominance. During inspections of Russian troops at Kheimemin, Putin led entourages, forcing Assad to trail behind him. He has insisted on meetings in Russian bases instead of the presidential palace – a clear slight to a leader who he regularly complained was yet to return Russia’s investment in blood and treasure.

In the city of Homs, business is reportedly brisk at a regime recruitment post. “I had to wait for three hours,” said one soldier, a sergeant, who said he had few qualms about travelling to Ukraine. “The Russians helped us a lot and now we will help them,” he said. Asked what he would be paid, he responded: “Twenty-five times what I’m earning now. You don’t think the terrorists from Idlib won’t go to join the Ukrainians? Of course they will. We will be fighting each other again, but this time in the snow.”

A second pro-regime fighter, who fought for four months in a militia in southern Syria last year, said he had been offered $600 plus death benefits to travel to Ukraine. “That is more than I could ever earn in Syria,” he said. “That is putting a value on my life, I know, but that’s what life is worth these days. If I die there, at least my family can live.”