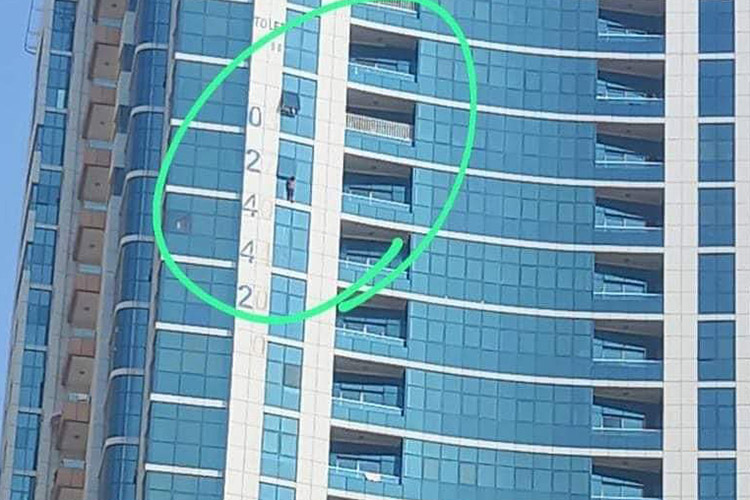 The child clung to the window for 15 minutes, hanging from the 13th floor of a residential tower in Taawun area.

Major General Saif Al Zari Al Shamsi, Commander-in-Chief of Sharjah Police, honoured an Arab resident and an Asian building guard for their valour in rescuing a 4-year-old Arab child, before falling from the window of his parents' house. The child clung to the window for 15 minutes, hanging from the 13th floor of a residential tower in Taawun area.

Al Shamsi praised the honourees’ good behavior and promptitude, which saved the child, by seeking help from the police while exerting strenuous attempts to rescue the child until they were finally able to catch him and deal professionally with the situation to prevent him from falling before the arrival of the competent teams.

The responsibility of all members of society would necessitate them to co-operate with the police and to share roles for the stability of the society and protection of its members, he said, stressing the keenness of the Sharjah Police to honor those who co-operate with them for their positive and effective role in enhancing the society’s security and safety. 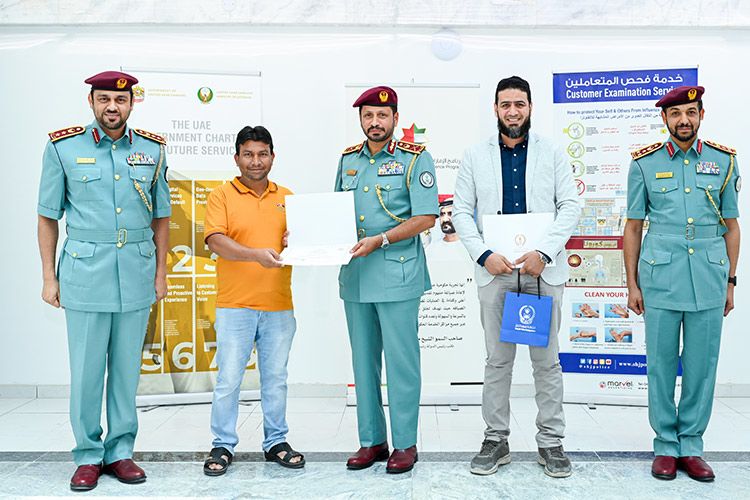 Al Khaleej met Adel Abdul Hafeez, a resident of the tower, who helped rescue the child in co-operation with the building guard. He said: “Around 8am last Tuesday and as soon as I returned home after taking my children to school, I noticed a group of maintenance workers in the vicinity of the residential tower, crying out and pointing towards the upper floors. When I looked up, I saw a child screaming loudly while clinging to the front window of an apartment on the 13th floor.”

“I asked my wife to call the police and in the meantime I rushed towards the entrance to the tower to search for the building guard and ask him for help. I told him to call the child’s father to inform him how dangerous the situation was and how it was necessary to break the door to rescue the child, especially since he was left alone in the apartment and it was difficult to rescue from the outside. The building guard and I then broke the door using the maintenance workers’ tools, and as soon as the door was opened, I went straight to the glass window to rescue the child,” he added.

“Although there was no sofa or the like near the window for the child to reach the window, he was able to reach a point where it was very difficult to be rescued, especially since the extent of opening the window was limited. Communicating with the child’s parents, breaking the door and reaching the child took approximately 15 minutes, during which the child clung to the windowsill with his fingertips.

A neighbor tried to help the child from outside by pushing him upwards from a side window but he was almost about to fall and consequently I had to grip the child’s hand and waist, while asking the building guard to push the window as hard as possible for me to lift the child.

Although the situation was difficult, the small size of the 4-year-old child enabled us to lift and rescue him. Later, the police, civil defence and national ambulance teams moved to the apartment in the presence of the child’s mother to complete the procedures,” he said.

Mohammed Rahmatullah, the building guard, told Al Khaleej: “As soon as I knew about the child’s situation, I soon realized where he was and what apartment he belonged to and knew that his mother was not at home at the time.

I requested the maintenance workers to go to my room and bring all bed covers and everything that might protect the child if he fell. In the meantime, I communicated with the child’s father and told him that a tower resident wanted to tell him that it was necessary to break the door of the apartment to rescue the child.

After entering the apartment with the help of a tower resident, my prime concern was to open or break the window and that was what I did to be able to rescue the child.”

In turn, Sharjah Police completed the other procedures of identifying the people who rescued the child as well as his parents by asking them to visit the Buhairah Comprehensive Police Station for complete investigations and referring the file of the incident to the competent authorities.