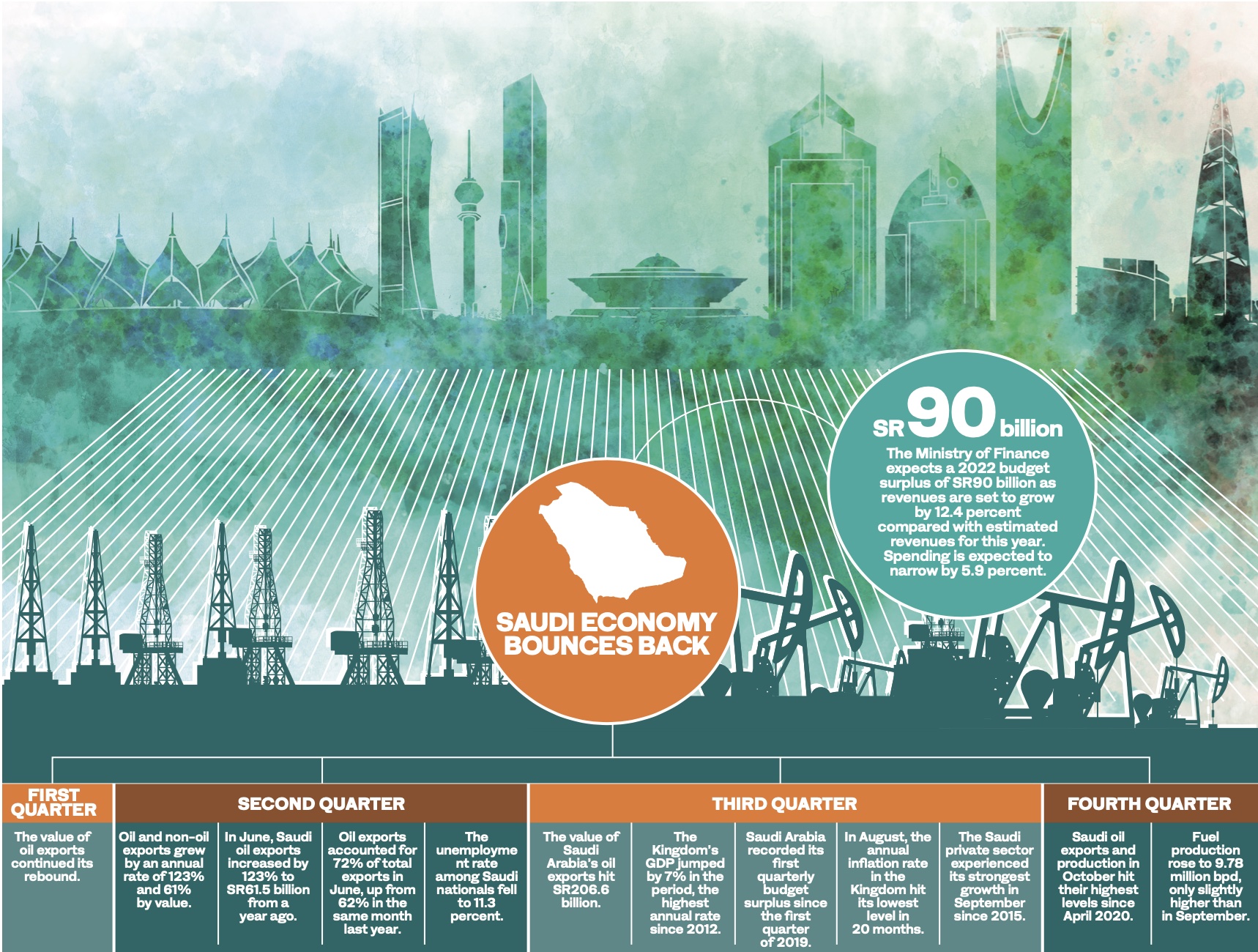 The Saudi economy recovered in 2021 after a tough year of pandemic restrictions as vaccination campaigns rolled out in the Kingdom and across the world driving its key oil exports.

MENA’s largest economy bounced back from last year, when the Kingdom’s gross domestic product contracted by 4.1 percent, according to the International Monetary Fund.

Some economic data in 2021 even bettered pre-pandemic levels, although the full effect of the latest omicron variant is yet to be played out.

Here are the Kingdom’s economic key highlights this year:

The value of oil exports continued its rebound in the first quarter of 2021, rising for the third consecutive quarter and hitting the highest level since the final quarter of 2019, according to official data.

However, in all four quarters of 2021, the Kingdom’s oil exports were lower when compared to the corresponding periods in 2019.

Oil and non-oil exports grew by an annual rate of 123 percent and 61 percent in the second quarter by value, respectively, according to the General Authority for Statistics. These were the highest annual growth rates for both categories since at least 2018.

In June, the value of Saudi Arabia’s oil exports increased by 123 percent to SR61.5 billion ($16.4 billion) from a year ago, said GASTAT.

Oil exports accounted for 72 percent of total exports in June, up from 62 percent in the same month last year, it added.

The unemployment rate among Saudi nationals fell to 11.3 percent in the second quarter, the lowest since at least the same period in 2016, said GASTAT, attributed to ongoing government efforts to boost local employment in the private sector.

By contrast, Saudi unemployment had hovered at a mean rate of 13.7 percent in 2020.

The value of oil exports hit SR206.6 billion in the third quarter, the highest since the final quarter of 2018, as the sector enjoyed rising demand and higher prices.

This led the Kingdom’s GDP to jump by 7 percent in the period, the highest annual rate since 2012. Oil and non-oil output surged by 9.3 percent and 6.3 percent, respectively.

The Ministry of Finance added that the Kingdom recorded its first quarterly budget surplus since the first quarter of 2019. The surplus was valued at SR6.7 billion, reversing a SR4.6 billion deficit in the previous quarter.

The upswing was driven by multiyear high crude prices and government social spending cuts, as the pandemic eased.

In August, the annual inflation rate in the Kingdom hit its lowest level in 20 months, reaching 0.3 percent. Rises in consumer prices in the second half of the year slowed as the effects of the VAT hike from 5 percent to 15 percent in July 2020 faded.

The Saudi private sector experienced its strongest growth in September since 2015, according to IHS Markit, driven by new orders and higher output. Shoppers received a boost following the easing of lockdown restrictions, driving growth.

Also, the budget deficit hit SR293.9 billion in 2020, rising more than two-fold compared to 2019. Spending on social benefits, subsidies and grants were all raised, at the height of the pandemic.

Saudi oil exports and production in October hit their highest levels since April 2020, according to data published by Jodi. Oil shipments lifted 5 percent on the previous month to 6.83 million barrels per day. Fuel production rose to 9.78 million bpd, only slightly higher than in September, but this was 9 percent up on a year ago.

The outlook for the Saudi economy next year is favorable, according to government and economic forecasters.

The Ministry of Finance expects a 2022 budget surplus of SR90 billion as revenues are set to grow by 12.4 percent compared with estimated revenues for this year. Spending is expected to narrow by 5.9 percent. This will give the Kingdom its first fiscal surplus since 2013, if achieved.

The ministry forecasts that the economy will grow by 7.4 percent next year.

Capital Economics has a similar forecast of 7.3 percent, saying that oil production will push up the Kingdom’s output in 2022.

The GCC Statistical Center, Jadwa Investment as well as Capital Economics expect Saudi Arabian inflation in 2022 to settle at between 1 and 2 percent as last year’s VAT rise continues to ease.