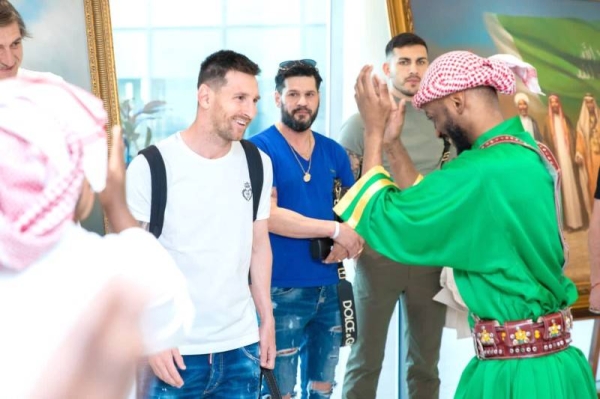 Upon arrival at King Abdulaziz International Airport in Jeddah on Monday, Messi was accorded a rousing welcome. He was accompanied by his colleague in the Argentine national team and French club Paris Saint-Germain midfielder Leonardo Paredes and other friends.

Welcoming the player, Minister Al-Khateeb wrote on his Twitter account: “Today I welcome Lionel Messi and his friends to Saudi Arabia. We are excited for you to explore the treasure of the Red Sea, Jeddah Season and our ancient history. This is not his first visit to the Kingdom and it will not be the last, and I am pleased to announce Messi as the ambassador of Saudi tourism,” the minister tweeted in Arabic.

The photo, attached along with the tweet, showed Messi's arrival in Jeddah, along with his colleague Leandro Paredes. As the announcement of Messi’s new role as Saudi Arabia’s tourism brand ambassador spread on social media, many users, including fellow footballers, lauded the Tourism Ministry for the appointment.

This was Messi’s fourth visit to Saudi Arabia after he led his country in 2011 in a friendly match against the Saudi national team at King Fahd International Stadium in Riyadh, before attending the Super Classico Cup between Brazil and Argentina, also in Riyadh. During the third visit in 2020, he faced Atletico Madrid in the semi-finals at King Abdullah Sports City stadium in Jeddah.